“We are protesting today because of the plunder, betrayal, destruction and repression by the Aquino regime against the indigenous peoples,” said Piya Macliing Malayao, at the program held at the foot of Mendiola bridge on August 12. Malayao is the spokesperson of the Kalipunan ng mga Katutubong Mamayanan ng Pilipinas (Kamp).

“Not only has Aquino brought in destructive foreign corporations in our ancestral lands, he has also brought in foreign troops,” Malayao said. She said Aquino’s Executive Order 79 has worsened liberalization in mining, while the Enhanced Defense Cooperation Agreement threatens ancestral domains with permanent basing for US troops.

The program was in commemoration of the International Day of World Indigenous Peoples on August 9.

Igorot, Aytas, Dumagats and Blaan dressed in their traditional loincloths and tapis gathered and set fire to an effigy of President Aquino depicted as a yellow skull in the middle of a web posted with projects that had caused dislocation of indigenous peoples from their ancestral lands. The Aytas,along with a Blaan leader, pranced around the burning effigy while thrusting their spears in war dance gestures. 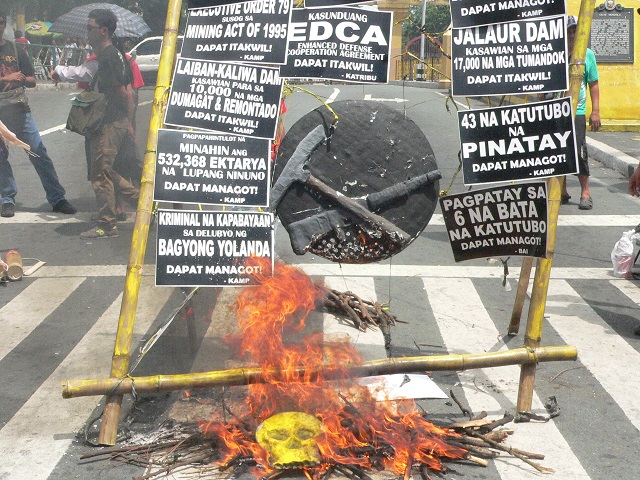 The indigenous peoples reiterated their call to oust Aquino.

Abigail Anongos, Cordillera Peoples Alliance (CPA) secretary general said that they are calling for Aquino’s ouster not to put Vice President Jojo Binay in place. “Instead, we want a transition council where true representatives of the people will be in place.

Before proceeding to Mendiola, the indigenous peoples also joined the protest at the National Bureau of Investigation (NBI) along Taft avenue, where newly-arrested retired Maj. Gen. Jovito Palparan was detained.
Report

Although they may hold rallies and protests in the cities, indigenous peoples are also engaged in various forms of struggle to defend their ancestral lands.

In its report entitled “The indigenous peoples under Aquino: Four years of deception, dispossession and destruction,” KAMP said: “For the past four years, President BS Aquino’s economic policies of deregulation, liberalization and privatization, combined with his counterinsurgency Oplan Bayanihan have dispossessed and uprooted indigenous peoples from their ancestral territories in favour of profits for local and foreign big businesses.

“Faced with the continuing and worsening violations of their rights, indigenous peoples responded with resistance,” the KAMP said. “They engaged in all forms and levels of struggle to defend their rights to ancestral lands and for self-determination: from protests and barricades, to armed defense of their land and life.”

In the legal arena, indigenous peoples carried out information and signature campaigns, such as the one launched by the Scrap the Mining Act Network in June. The petition signing against the Mining Act of 1995 had gained the support from church people, environment and IP advocates.

Another campaign, the Save Our Schools (SOS) started in 2012 was in response to the attacks from the military against schools set up by indigenous peoples in Mindanao. The campaign continues to “oppose the ongoing human rights violations against children, teachers, indigenous peoples and peasant communities,” said the KAMP report.

The schools, which were established by indigenous peoples organizations with the help of church institutions and NGOs to provide education in the hinterland tribal communities, had been targeted by soldiers conducting “peace and development” operations.

At the community level, encroachment in their ancestral lands become the binding force that unites indigenous peoples. The report said the formation of the Tribal Indigenous Oppressed Group Association (Tindoga) was “organized by the Pulangihon-Manobo in Quezon, Bukidnon as they are being eased out of their lands by the owners of Rancho Montalvan,” said the report.

It also cited the formation of the Alyansa ng Nagkakaisang Novo Vizcayano para sa Kalikasan (ANNVIK), which is expanding its membership and getting increased support in its fight against the exploration by the Australian mining corporation Royalco Phils Inc. in the province.

Extralegal measures, such as barricades were put up by indigenous peoples in Dupax del Norte and Kasibu in Nueva Vizcaya to stop Royalco. The people started the barricades in 2007 to bar the entry of Royalco’s equipment and employees, and they persist up to the present. 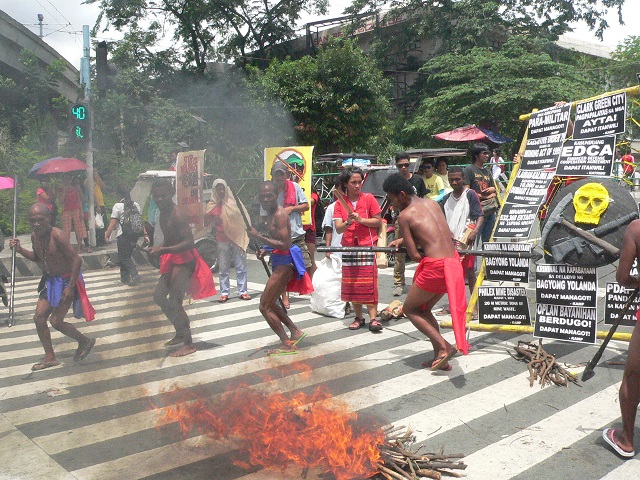 In the Cordillera region, the Kankanaeys and Ibalois of Mankayan, Benguet also put up barricades against the drilling operations of the mining company Goldfields Resources Limited, which is an expansion of the Lepanto Consolidated Mining Corporation. The indigenous peoples “have endured many threats, harassment, demolition and human rights violations.”

KAMP also noted “one of the largest food protests” participated in by thousands of Mandaya and Lumad who were demanding relief and rehabilitation in the wake of typhoon Pablo. The mass actions had stirred up media attention to the corruption of relief funds by government officials. A leader of the typhoon victims, Cristina Morales, a Mandaya, was shot dead by a suspected military death squad.

“The pangayaw – that roots from precolonial times when tribes are constrained to wage war when other tribes impinge on their territories or harm a member of their tribe – is brought alive by the modern-day threats to the welfare of the tribe,” the report said.

“In the pending operations of SMI-Xstrata that poises to displace 30,000 Blaan living in the Kiblawan, Tampakan, Columbio and Malungon municipalities in the mountain ranges of Saranggani, Davao del Sur and South Cotabato, the Blaan have waged pangayaw to defend their land and life against mining plunder and military suppression,” KAMP said.

“In this case, the B’laans are constrained to wage war against an encroaching transnational corporation, defended by a well-greased AFP,” KAMP said.

The KAMP report noted the killing of four members of the Capion family by the military and that of Datu Anting Freay and his son Victor.

“The BS Aquino regime has violated both the IPs collective right to land and resources, and their individual civil and political rights. For four years, it has done nothing to give justice to IP victims of human rights violations, or even show the least respect for IP rights,” KAMP said.