DAVAO TODAY – While in grief following the recent bombing of their church in Pikit, North Cotabato last Wednesday, the General Secretary of the United Church of Christ in the Philippines (UCCP) called for a prayer for peace.

The attack killed two of their members and wounded three others.

“We condemn in the strongest term the bombing of one of our local churches in Mindanao,” said Bishop Reuel Norman Marigza in a statement Friday.

“No circumstance or reason can justify such deplorable act on a house of worship leading to the death and injury of worshipers,” Marigza, also general secretary of the National Council of Churches in the Philippines (NCCP) said.

Two suspects onboard a motorcycle fired a 40-millimeter grenade at the gate of the church located in Sitio Bliss, Barangay Pagangan.

Marigza said that “as of this time, there is no evidence as to who were responsible and what their motives were. There are theories and speculations but no concrete proof as of yet.” 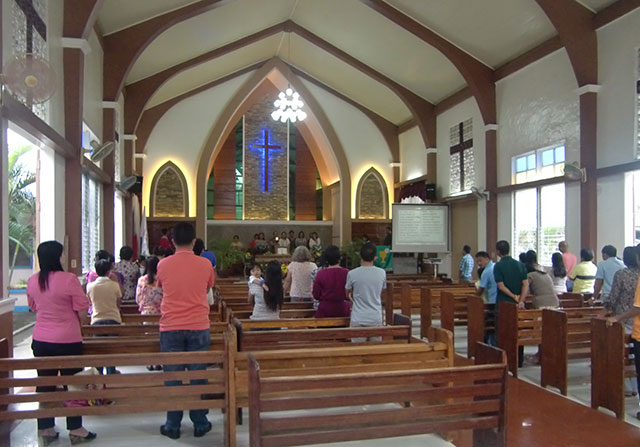 Col. Dickson Hermoso, Philippine Army 6th Infantry Division spokesperson confirmed in news reports that at least 40 people were inside the church when the attack happened.

“In times like these, when emotions and passion tend to run high, we call for sobriety. Let us avoid speculations and a rush to judgment that are unwarranted and which may just lead to further escalation of tension and of violence,” Marigza said.

The church leader also expressed their gratitude to the local Muslim leaders who also joined them in condemning the incident.

“We are heartened in this hour of our grief, that as we condemn the attack on our church in the strongest term possible, that Muslim leaders in the area have joined us in condemning this despicable act,” he said.

“Our Muslim brothers and sisters in the area are fully aware of the inter-faith and ecumenical posture of our Church and how our Church people and institutions, like the Southern Christian College, had been in the forefront of promoting peace in Mindanao.”

Marigza enjoined the local church leaders of UCCP in the country to “designate a time in their worship services this Sunday to remember those who died and those who are in need of healing and to pray for peace as well as for justice for the victims and comfort for their families.”

“This may be an opportune time to show to the world that we, as a people – whether Christians, Muslims or Lumads – long for peace by calling for an inter-faith, tri-people prayer rally for unity, justice and peace.”

While Bishop Hamuel Tequis, Jurisdictional Area Bishop of South-East Mindanao will lead a delegation of church leaders to Pikit on their worship this Sunday.

“We will visit the injured and express our condolences to the families of Ferolin and Cabiluna. We also hope to support the community in gathering data and documenting accounts of what transpired in Pikit last Wednesday,” said Tequis in a statement released Saturday.

“Many UCCP members have expressed feelings of fear, grief, and disbelief that this happened during a worship service. We must provide counsel, care, and spiritual guidance for our members,” he said.