Teachers slam 2015 gov’t budget: ‘Not a centavo for salary hike’ 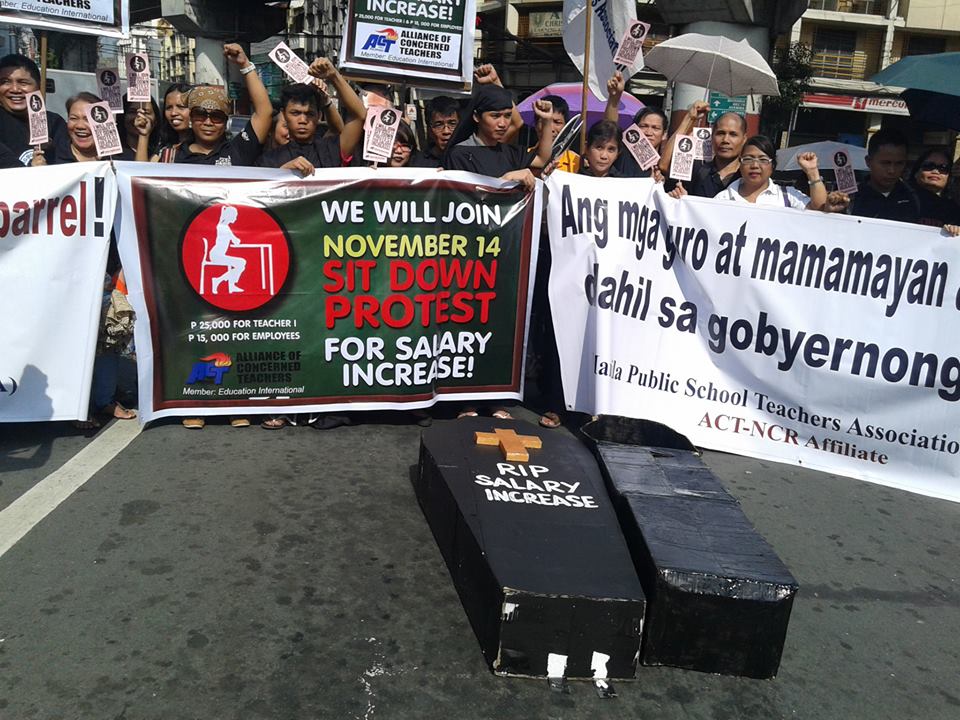 MANILA – Public school teachers from the Manila Public School Teachers Association and the Alliance of Concerned Teachers held a protest action with a Halloween theme on Thursday, Oct. 30 at the Chino Roces Bridge (former Mendiola Bridge).

President Benigno S. Aquino III and Department of Budget and Management Secretary Florencio Abad were portrayed as The Grim Reaper or “death” to teachers whose salary was nailed to P18,549 a month ($414) since 2009. 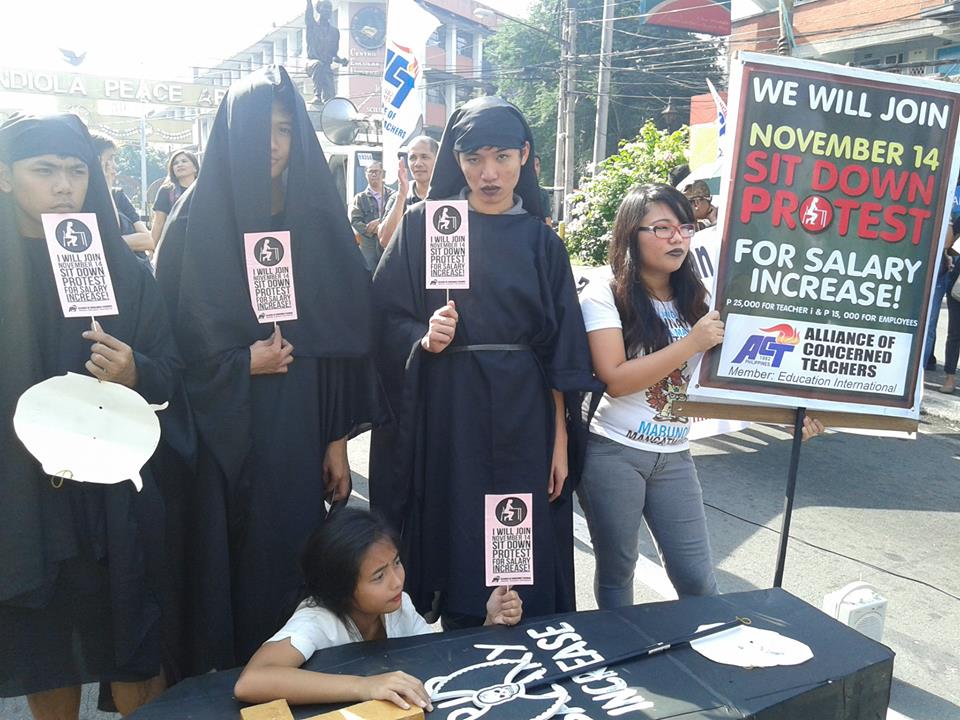 Benjie Valbuena, national chairman of ACT said, the budget for 2015 has been approved in the House of Representatives and not a single centavo was allotted for the salary increases of public school teachers and employees.

He added, “Despite numbers of proposed bills on salary upgrade of teachers in the House of Representatives and Senate, Aquino, through his notorious Budget Secretary Butch Abad, keeps on blocking these proposals.” 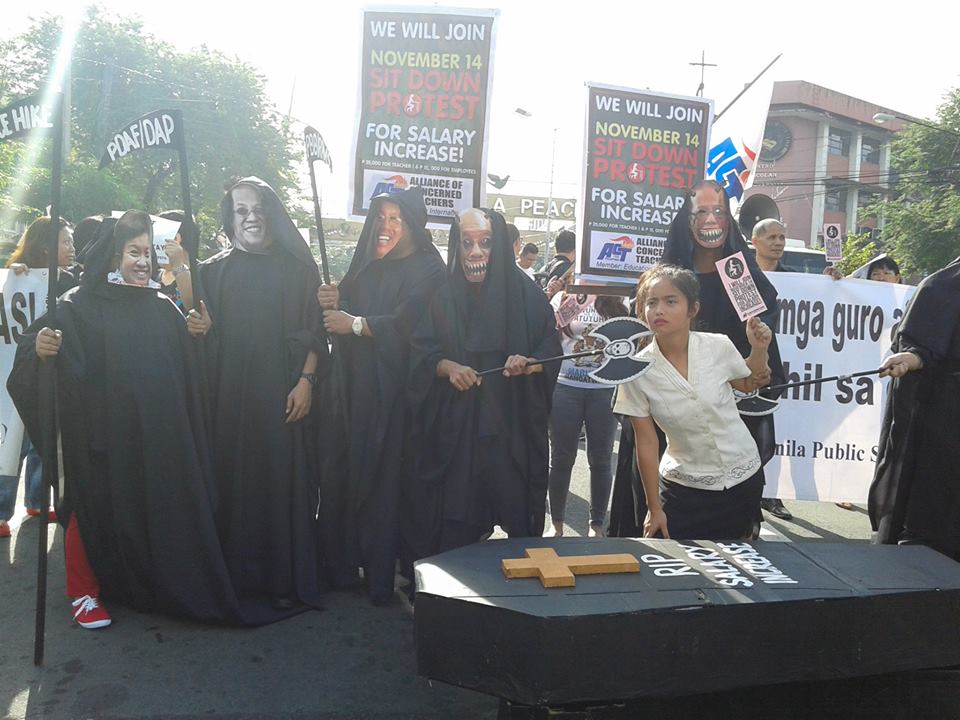 Valbuena said Presidential Communications Secretary Herminio Coloma said over a radio interview on October 28 that Aquino supports calls for salary increase, but it was “nothing but empty rhetoric.”

“If Aquino is really sincere with his pronouncement, he should certify a bill increasing our salaries as urgent and direct his budget secretary not to block its approval,” Valbuena said. 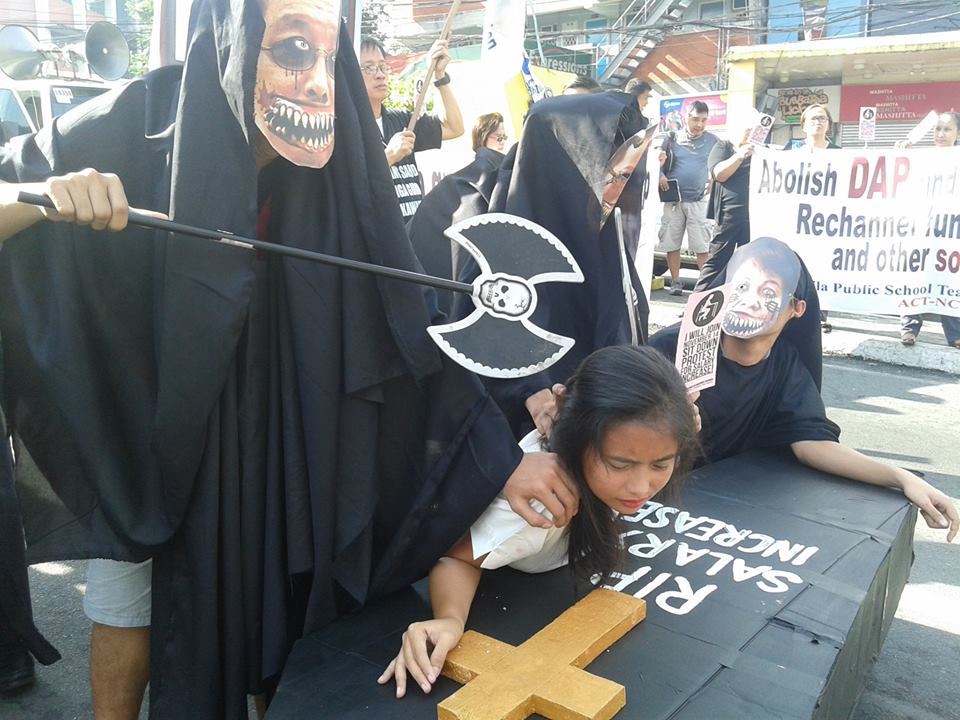 Valbuena said the Aquino administration violated the Salary Standardization Law III (SSL III) that states that a periodic review and adjustment of the salary of government employees must be done every three years to make sure that they are well compensated.

“The Magna Carta for Public School Teachers also states that our pay should be able to provide us with a decent form of living,” Valbuena said. He said that since 2009, teachers’s salary did not change at all. In fact, the benefits teachers used to receive were even reduced from P10,000 ($223) to only P5,000 ($111).

On November 14, teachers will stage a one-day sit down strike to continue their demand for a “just and decent living wages.”

Photos by the Alliance of Concerned Teachers
Text by Anne Marxze D. Umil