Greetings of peace and love from the Typhoon Yolanda (Haiyan) survivors!

Indeed we have the same wish: a wish of a poor church and for the poor… for we are the poor in the church.

In the spirit of mercy and compassion (the theme of your visit to the Philippines,) we are writing to you to express our gladness of your coming visit to Tacloban especially to the survivors of typhoon Yolanda (Haiyan); and to put across what is in our hearts. You are our father and we are your children, children of the storm. After the typhoon last November 8, 2013, many survivors were left with almost nothing and suffered in most difficult circumstances of hunger and deprivation. Even before Typhoon Yolanda, our region of Eastern Visayas was the second poorest in the country, with other areas hard hit by the typhoon not far behind. We have been cast even deeper into the pit of poverty. Peasants and fisherfolk, workers and urban poor, the lowly paid professionals – we all feel the lack of land, industries, and progress. But, a few wealthy and powerful families are among the richest in the world.

Our lives are in ruins, Holy Father. We do not know to whom we can turn, because those in power do not see us nor respond to our cries. Our government failed to help us during our darkest moment. The people do not feel the trillion Philippine pesos in international humanitarian aid that the country has received. Even one year after the storm, the Aquino government is not fulfilling their mandate to serve the people. In fact, they have had no clear plan for helping the people get back on their feet and have relied instead on foreign aid and the profit-seeking private sector. 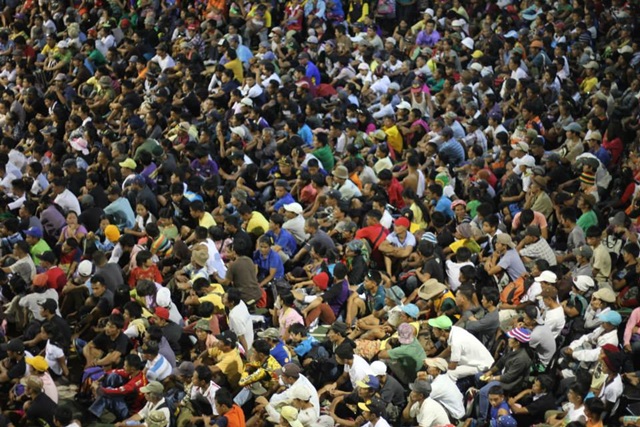 We still see no light, Holy Father. Though the government offers its RAY or Reconstruction Assistance for Yolanda, we struggle for our daily rice and fish. The majority, who are peasants, fear for the future because measly government aid though agriculture is not adequate for this primary livelihood that suffered the most damage from the storm. Many have no land, no work, no government services, and live in rags and hovels, under a continuing cloud of vulnerability to environmental and climate disasters.

One year after Typhoon Yolanda ripped and ravaged our homes and communities, the Aquino regime remains deeply mired in a massive corruption scandal; many government officials are alleged to have pocketed billions of pesos meant for the people, while the storm survivors suffer hunger, disease and neglect. Supposed government rehabilitation will go to infrastructure and other construction work. In contrast, many families have no homes and the rain and sun torment them in cities of tents and inhumane bunkhouses, alleged to have been constructed with corruption by the government. Those of us who live along the sea are forbidden to return to our communities because big businesses want to turn these into enclaves of expensive houses, resorts, casinos, and other profit-driven enterprises.

We know no peace, Holy Father. When the poor raise their voices to cry for justice and peace, the rich and powerful rulers are offended by our sound and continue to oppress us. These poor people are branded as communists. Two have already laid down their lives in the journey for justice for the survivors. Many communities are under the rule of the gun wielded by the government. Even as the Holy Father knows, the rich and powerful seek to hide the poor and deny our abject conditions.

We beseech the Holy Father to pray for us and illumine our struggle for justice and peace, equality and progress. We humbly appeal for an audience, so that we can pray together in solidarity with the poor and powerless struggling for life in their communities and standing for meaningful change. We pray with hope for a future where basic rights will be genuinely observed, so that all humanity may live and prosper on this earth.