You Are Here: Home → 2015 → February → 3 → #mamasapano | A rare, tension-free prayer and candle-lighting gathering in front of Camp Crame

#mamasapano | A rare, tension-free prayer and candle-lighting gathering in front of Camp Crame

“We express our unity and condolence as part of our struggle for truth, accountability and justice.”

MANILA — Gate 1 of Camp Crame in Quezon City became the setting of a rare encounter between police and activists in the evening of Feb. 3, as church people and progressives gathered to pray, light candles and call for “truth and accountability” on the deaths in the bloody Mamasapano clash, 44 of whom were from the elite Special Action Force (SAF). 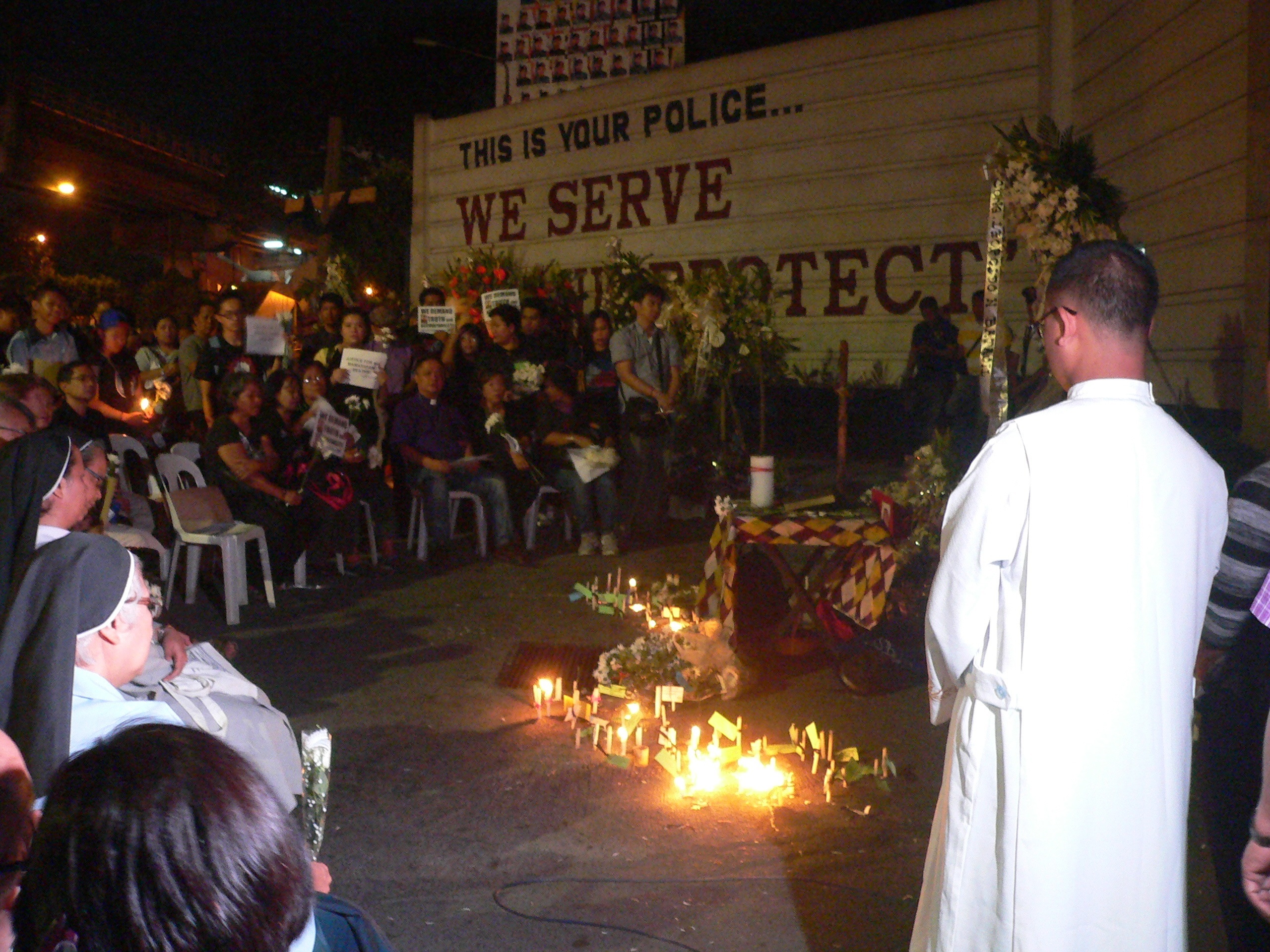 The first ecumenical mass held in front of Camp Crame for the Mamasapano deaths.
(Photo by D. Ayroso)

There was no blaring music, no intimidating anti-riot police with shield and batons, which usually confront protesters at the gate of the Philippine National Police (PNP) headquarters along EDSA. Instead, the police kept a silent, if not accomodating presence, as they kept traffic, stayed on the sidelines and listened.

It was the first time that a mass was held at the Crame gate for the Mamasapano deaths, and it was organized by the progressive Promotion for Church People’s Response (PCPR).

“Today, on the ninth day since their deaths, we offer our prayers,” the priest said, opening the ecumenical mass. “We pray that truth will come out and cast out lies, greediness and criminal negligence of the commanding officers. We pray that those responsible in the incident will bring out justice to the fallen. Lead us not into temptation, disunity, but unite us in hope and principle for the truth we urgently need.”

The police closed the exit gate to provide space for a small altar, set amidst the flowers and melted candles that had gathered in the past days for the slain Special Action Force (SAF) men.

The responsarial phrase said: “We weep for the fallen, as Christians and Muslims together.” 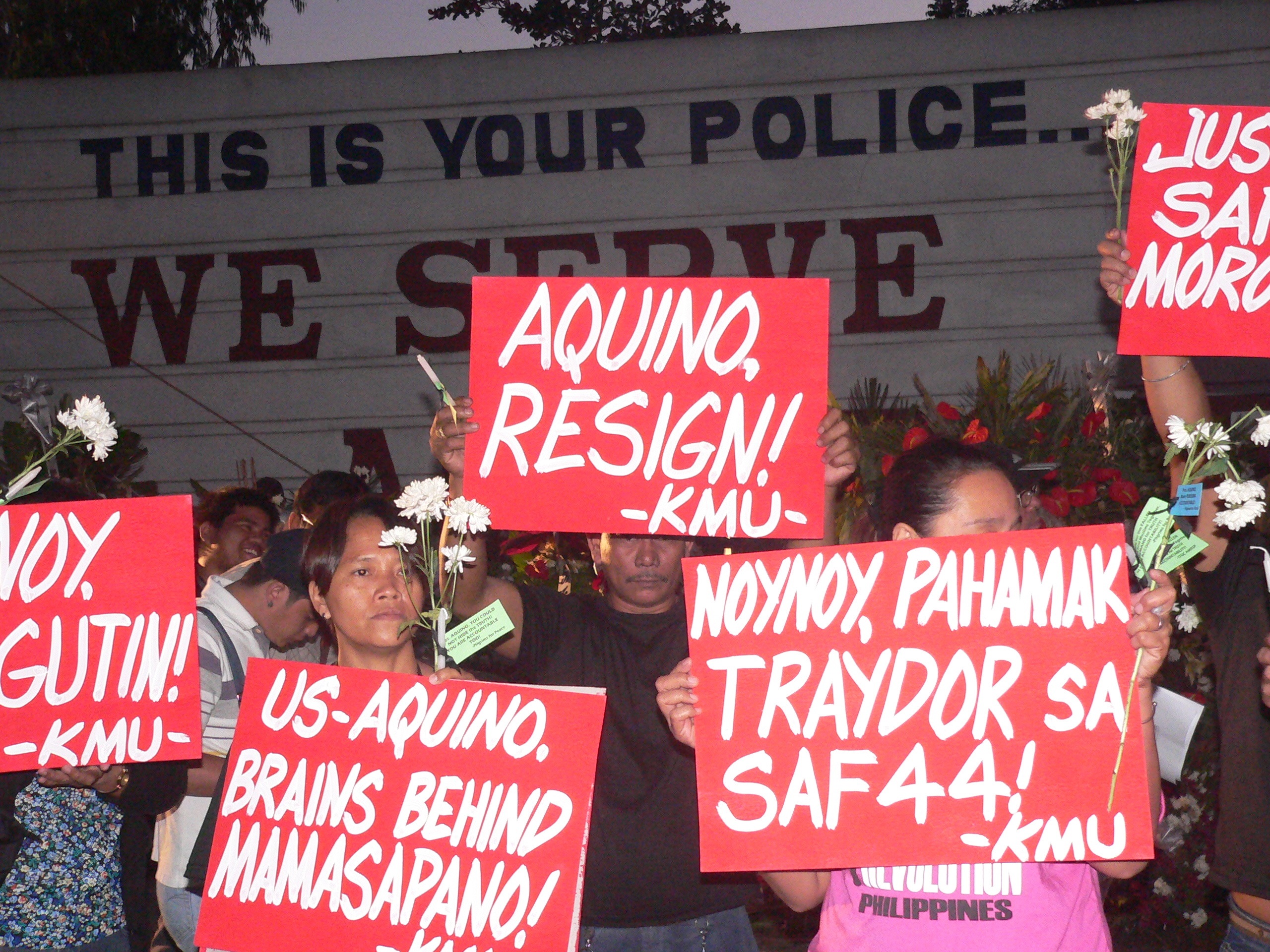 Activists call for ‘truth and accountability’ for the Mamasapano deaths. (Photo by D. Ayroso)

“We express our unity and condolence as part of our struggle for truth, accountability and justice.Tonight, we offer prayers. In the coming days, we offer action, and express our call for truth to give justice for all who sacrificed and died,” said Casiño.

Police men soberly watched in silence. A security guard took a bunch of flowers, and said: “This is for all of us.”

Nardy Sabino, PCPR secretary general said: “We have proven that we could actually come together, as we all seek truth and accountability.” Sabino thanked the police officers at the gate after the mass.

Bulatlat asked a policeman what he thought about the activists praying for their colleagues, and he nodded in appreciation. “They’re expressing sympathy,” he said.

Does it feel strange, not to have tension between police and activists? Bulatlat asked another police man, who readily grinned in agreement. “Peace muna kami,” he said. Then his face turned grim when he added: “Somebody must answer for what happened.”

In Southern Tagalog, groups from Bagong Alyansang Makabayan Southern Tagalog (Bayan-ST) held a vigil Feb. 3 at Waltermart, in the city of Calamba, Laguna. The contingent will proceed to Manila on Feb. 4 for a march on the commemoration of the Philippine-American War, and to join other progressives in their call to hold President Aquino and the US accountable to the deaths in the Mamasapano clash.

“It is clear as day that Aquino himself is sabotaging the efforts to attain peace in Mindanao,” said Rev. Gil Sediarin, Karapatan-ST Deputy Secretary General. “His denial and play-safe statements in the aftermath of the carnage of his own men, proved futile to save his tainted image as an incompetent and indifferent Commander-In-Chief.”