COTABATO CITY – The widows and the wounded soldiers of the recent all-out offensives and law enforcement operations against the Bangsamoro Islamic Armed Forces (BIFF) in Maguindanao appealed to the government to continue with the peace process and pass the Bangsamoro Basic Law (BBL). 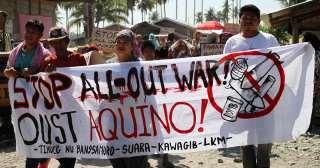 The widows said that losing their husbands and the fathers of their children “weighed more than the thousands of bullets and armaments used in this continuing operations.”

“Pain haunts us through hopeless days and nights as we gazed at our children whose faces now are painted with uncertainties,” the group added.

The law enforcement operation of the army and the PNP in Maguindanao is still going on, resulting to the reported displacement of thousands of residents in the area.

The operations have greatly affected the residents from the towns of Salibo, Pagatin, Mamasapano and Shariff Aguak.

Authorities recently claimed that 139 rebels were already killed during the operations, 53 were wounded and 12 were arrested. Reposted by