You Are Here: Home → 2015 → April → 12 → Ph troops’ operations vs BIFF continue despite pronouncement

DAVAO CITY – The military offensives against the breakaway Bangsamoro Islamic Freedom Fighters (BIFF) in Maguindanao had not stopped even after the Army announced to end it on March 30, a Moro group said.

Jerome Succor Aba, national spokesperson of Suara Bangsamoro, said on March 30: “as the armed forces announced a stop to all-out offensives, bombs and sounds of rifles could be heard in Barangay Malangog of Datu Unsay Ampatuan municipality and Barangay Kitango of Datu Saudi Ampatuan.”

“The day after 6th [Infantry Division’s] public announcement of a stop to all-out offensives, the 1st Mechanized Brigade of the Philippine Army set-up camp at Barangay Binangga, Talayan in Maguindanao for five days (April 1-5) bringing with them 22 military tanks and 6×6 trucks.”

On the last day, April 5 around 8:00 in the evening, the Army “burned two mosques and 32 houses of Maguindanaoan residents in the said village and even left a V90 artillery (that looked like a bazooka) in one of the mosques,” Aba said in a statement on Friday.

A son of a farmer in Barangay Pusao, Shariff Aguak was reportedly killed, said Aba.

Keri Uga Dia, 18, was reportedly apprehended by the 8th Marine Battalion Landing Team on March 16 at around 11:30 to 12:30 noon in Baranggay Pusao.

His body was found in the village hours after the Marines took him to their detachment. His body has a hole in the left chest, punctured wounds in the right rib, right shoulder and on his armpit.

Aba said the 48th Marine Company announced that Dia was suspected of delivering food for the BIFF, tagging him as a supporter.

However, the parents and brother of the victim denied his involvement with the BIFF saying that Dia was suffering from mental ailment and probably has been traumatized when he was apprehended.

Suara Bangsamoro calls on President Benigno Aquino III to stop the all-out offensives by the residents of Maguindanao. The group said the government should also indemnify more than 100,000 residents affected and now living in makeshift evacuation centers.

Aba fears for the lives of evacuees and the impending humanitarian crisis due to lack of relief and medical services. “Children are dying in evacuation centers due to dehydration and diseases,” Aba said, citing a case of a 14-day old infant who died in the evacuation center in Sitio Bayog, Brgy. Dapiawan in Datu Saudi on December 9.

“Due to scant medical services, his condition was not immediately attended to by the medical personnel in the area,” Aba said. 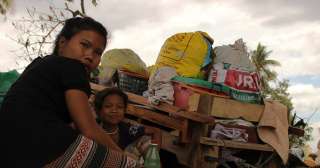 “The Moro civilian residents should not bear the brunt of the war of retaliation being waged by the Armed Forces of the Philippines (AFP) in the name of justice for the death of the SAF commandos. The residents of North Cotabato and second district of Maguindanao have suffered so much in the all-out offensives in the AFP’s failure to neutralize their true targets — the BIFF and terrorist Abdul Basit Usman,” said Aba. Reposted by