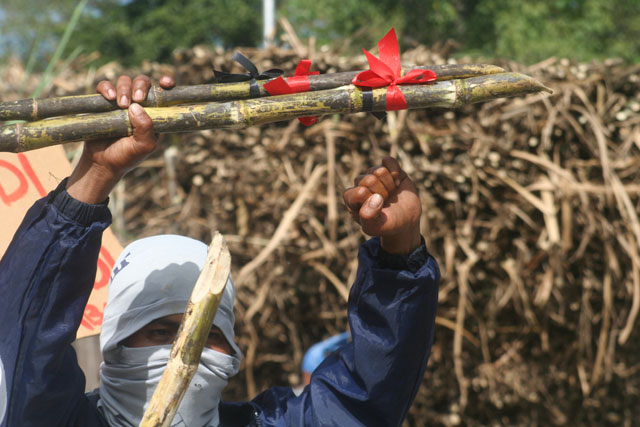 The national federation of agricultural workers fears that sugar workers would be paid even less this crop year as the tariff for imported sugar would go down to just five percent because of the ASEAN Free Trade Agreement.

In Bukidnon, meanwhile, the federation said the rates range from P279 ($6.3) to P294 ($6.4) daily but the real wage of male workers in the province is P100 ($2.3) per day, while their female counterparts get only P91 ($2). Real wages refer to wages adjusted for inflation or wages in terms of the amount of goods and services that can be bought.

Ranmil Echanis, Uma deputy secretary general said the non-existence of a national minimum wage aggravates the dire situation of workers, especially in vast haciendas and agricultural plantations. He said the varying pay rates imposed by regional wage boards across the country are not even close to meet the needs of a typical working class family.

In Hacienda Luisita, the group said the piece-rate remains at a measly P190 ($4.3) per ton or 907 kilograms of cut and hauled sugar cane. With a negligible amount as additional allowance, each cane cutter receives only P157 ($4) daily.

There are 12.8 million Filipinos employed in the agriculture sector based on October 2011 data of the NSCB.

The national federation of agricultural workers fears that sugar workers would be paid even less this crop year as the tariff for imported sugar would go down to just five percent because of the ASEAN Free Trade Agreement (Afta). The group said landlords and millers are expected to cut costs to be more competitive in the sugar market. In addition, most sugar mill workers are now contract workers with no security of tenure.

Echanis added that unfair labor practices such as contractualization, labor-only contracting, union-busting are also legitimized by the Aquino administration through agribusiness venture agreements or AVAs, brokered with supposed agrarian reform beneficiaries in plantations and haciendas.

Echanis said that even the meager P15-increase in the minimum wage rate in Metro Manila is “a grave insult to workers.” “Workers are not clamoring for a mere wage increase. We are fighting for a national minimum wage to ensure workers’ rights and welfare amid Aquino’s criminal neglect and intensified assaults on the people’s livelihood,” he said.

Uma joins the call for a national minimum wage pegged at P16,000 a month. They will join the nationwide protests on May 1, Labor Day.