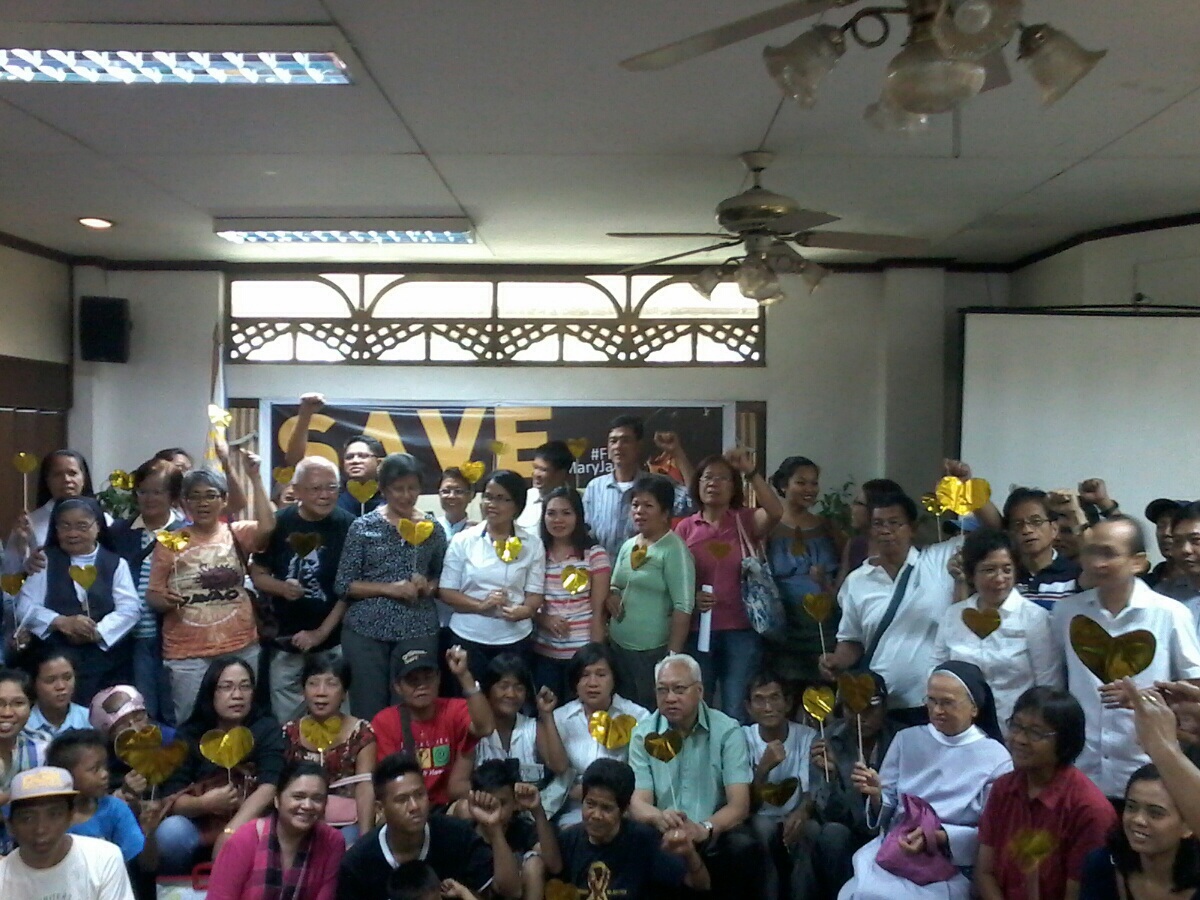 MANILA — Exactly a month after the last-minute reprieve for Mary Jane Veloso in Indonesia, an alliance that vowed to continue the fight to spare her from execution was launched on May 29.

The Save Mary Jane Alliance was formed by the Veloso family with groups that had been in the forefront of the campaign to save Mary Jane, such as Migrante International, Church Task Force, Bagong Alyansang Makabayan (Bayan), the National Union of Peoples’ Lawyers, and Gabriela. They were joined by religious leaders from the Catholic Bishops Conference of the Philippines and the National Council of Churches in the Philippines.

The alliance faces a battle to prove Mary Jane’s innocence, and to campaign for her clemency.

The case of illegal recruitment and human trafficking against her recruiters Cristina “Tintin” Sergio and Julius Lacanilao is under preliminary investigation at the Department of Justice.

Olalia said their case became stronger when both Sergio and Lacanilao admitted that Mary Jane is innocent. This is not enough, he said, and the two are still playing “hard ball” and refuse to cooperate.

Olalia said only three items match their statement with Mary Jane’s: that Sergio and Mary Jane went together to Malaysia, that they stayed in Sun Inn Lagoon hotel, and that they were approached by two African men.

“The statement is so disappointing because they changed the whole story so that Sergio would be spared of the charges,” Olalia said.

Olalia said Sergio’s counsels wanted a copy of the verdicts on Mary Jane’s case in Indonesia, which he said was “legally immaterial.” The defendants also wanted Mary Jane to personally swear on her affidavit before the court here in the Philippines.

“That is unreasonable, ridiculous and absurd. How could Mary Jane do that when she’s still on death row in Indonesia?” Olalia said.

Nardy Sabino, secretary general of the Promotion for Church People’s Response (PCPR), which is part of the Church Task Force, said they hope to get an audience with Indonesian Ambassador Johny Lumintang, and personally hand him a copy of the petition signed by 366,000 people from 127 countries.

“It is our way of telling them that not only Filipinos want Mary Jane spared from execution, but also people around the globe. We have their voices through the petition,” Sabino said. He said they hope to get 500,000 signatures before Ramadan starts.

Carol Araullo, Bayan chairperson, said that being an OFW can’t really uplift the lives of the Filipino.

“The jobs given by other countries to its foreign workers are the dirtiest, most unsafe and lowest paying jobs,” Araullo said. Most OFWs also barely earn enough for their families’ needs, she said.

She said that Mary Jane is the best example that not all OFW stories are successful. An OFW is prone to be deceived by recruiters, be abused by employers, and could even end up in jail for a criminal offense they commit either knowingly or unknowingly, she said.

An OFW also sacrifices the stability of hisar her family once he or she leaves the country, and the children are most affected. In many cases, children grow up with both parents abroad, or with estranged parents.

The stability in income is not enough to make up for the deterioration of family life, Araullo said. She said government must put a stop to the labor export policy, so that the Filipino family would not be put at risk, and nobody would suffer the same fate as Mary Jane.

The Kilometer 64 Writers’ Collective (KM 64) showed their support to Mary Jane by collecting poems made by different people, in a book, entitled “Mary Jane: Mga Tula.”

Stum Casia of KM 64 said they initially planned to just print the poems on plain paper, but they decided to publish it as a book, for Mary Jane and her family.

“There was no formal call to write poems for Mary Jane, but a lot of people made poems on their statuses, tweets and such, to show their support to Mary Jane,” Casia said.

Casia said they only included 60 poems in the book, although more than 100 poems were referred to them through social media.

“By collecting the poems, the message of support by the authors would not be wasted and forgotten. The book is our little way to make sure that Mary Jane knows how she was supported by the people,” Casia said.

Mary Jane’s mother, Celia still can’t believe that there are still people who are willing to help others without anything in return. She thanked the people and groups that joined the alliance.

“They don’t know my daughter, they don’t know us, but still, they’re helping us. Words are not enough to tell them how thankful we are for their support,” Celia said.

Celia promised that as soon as Mary Jane is freed and back in the country, she and her family will show their gratitude and support all the advocacies of the organizations who helped them.