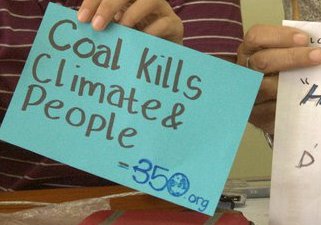 “No company with an atrocious environmental and social track record such as DMCI should be allowed to build environmentally-critical projects.”

Environmentalists are up in arms over government approval of the construction of a coal plant by DM Consunji Inc. (DMCI) in Palawan province, considered the country’s last pristine frontier.

On May 28, the Palawan Council for Sustainable Development (PCSD) gave a Strategic Environmental Plan (SEP) clearance to DMCI’s proposed 15-megawatt coal-fired power plant in the municipality of Narra. PCSD gave the clearance two days after it was endorsed by the provincial board, said a report.

Leon Dulce, campaign coordinator of Kalikasan People’s Network for the Environment (Kalikasan PNE), called the move “a serious blow to our national and natural heritage.”

“DMCI has a penchant for profiting from the destruction of our environment and our country’s heritage, from its Torre de Manila disrespecting the cultural importance of the Rizal Shrine, to its Narra Coal Power Plant threatening the unparalleled natural resources and wonders in Palawan,” Dulce said.

“We denounce the fact that there was no deliberation or debate at all within the council as Governor Jose Alvarez held sway over all other local officials, including the mayors of Puerto Princesa city and the municipality of Narra who meekly kept their mouths shut when the resolution was made,” the group said in a statement.

Pace also said that DMCI has not submitted an environmental impact assessment to the Environmentally Critical Areas Network (Ecan) board, a multisectoral body created to advise the local government unit in the protection, management and utilization of Palawan resources.

“We denounce the railroading of the entire local permitting process, from the barangay level to the municipal level, and from the provincial legislature, to the PCSD Council. All of these processes were a mockery of the consultative and participatory processes required under existing laws, and in direct disregard of PCSD’s own procedures,” the group said.

The PCSD is a body created by Republic Act 7611 or the Strategic Environmental Plan (SEP) for Palawan Act, and is in charge of governance, policy guidance and implementation of the SEP.

In June 2013, the Narra municipal council had come out with a resolution opposing the construction of the plant. Various environmental groups have opposed and campaigned against the coal plant.

On April 30, Manobo and anti-logging activist John Calaba, of the indigenous people’s organization KIDUMA, was disappeared and is feared dead after being last seen in the company of paramilitary members, who also serve as guards of DMCI in its project in Sultan Kudarat.

The Zambales Diversified Metals Corp., a subsidiary of DMCI Mining, is one of the mining companies blamed for the extensive water pollution in the farming and fishing communities of Sta. Cruz, Zambales

The Calaca coal-fired power plant, acquired by DMCI Power in 2007, reportedly causes respiratory diseases and had decreased fish productivity in Calaca, Batangas despite its use of “clean coal technologies;”

The Semirara Coal Mine in Semirara Island, Antique, which Dulce said “has caused much pollution to its host community and immediate marine environment;”

M&S Inc. and Silvicultural Industries, both owned by DMCI, have been logging in the Integrated Forestry management Areas in Sultan Kudarat since 1989 covering 24,380 hectares of forested areas.

South Davao Development Co., also a subsidiary of DMCI, has been exploring for gold and copper in 1,274 hectares within the M&S IFMA itself.

“No company with an atrocious environmental and social track record such as DMCI should be allowed to build environmentally-critical projects,” Dulce said.