They came down the mountains for their shining red star 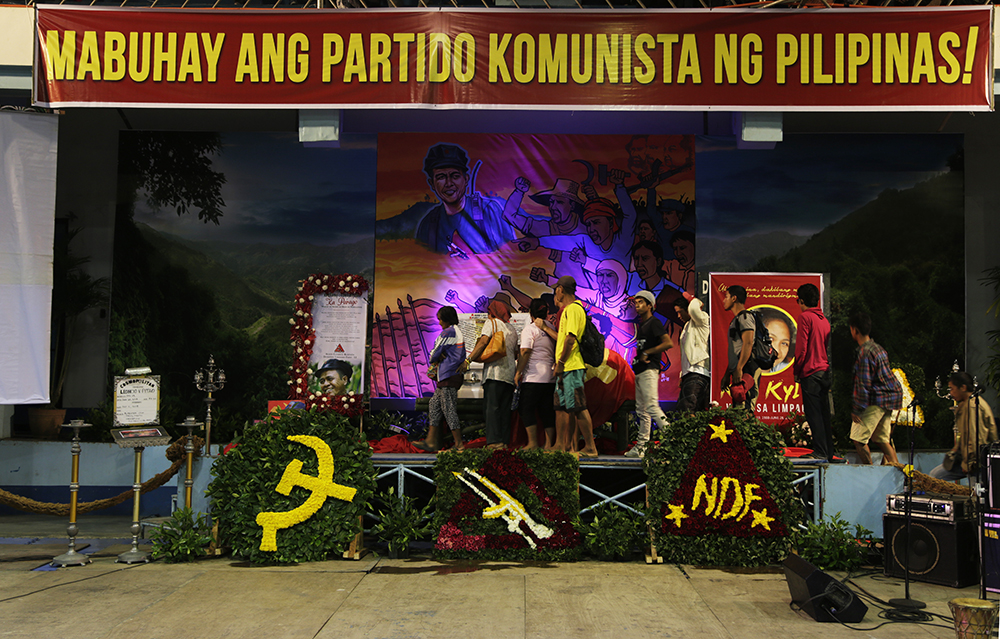 DAVAO CITY— “Are the flags ready for Tatay?” asked a young woman as she rushed into the cavernous Almendras Gymnasium in the heart of this sprawling southern city. She was talking on her phone while clutching a sheaf of papers, presumably the program flow of tonight’s tribute. “Pila? Okay. I-taxi niyo na. Basta kay Tatay, laban,” she said. (How much? Okay. For Father, we shouldn’t care how much.) 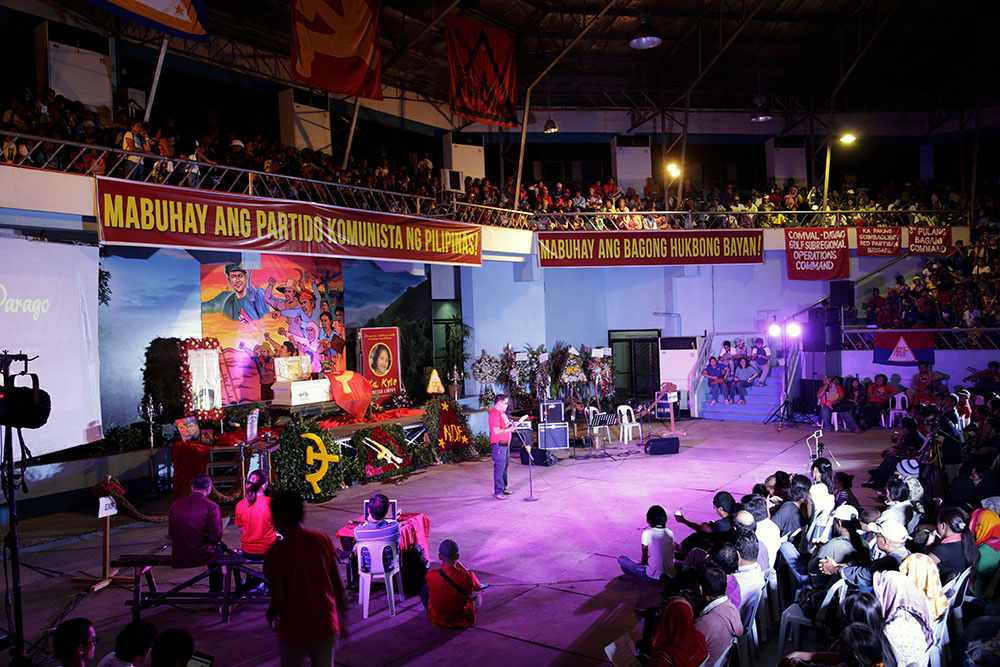 “Father” was the legendary rebel who punished the Philippine Army with telling blows for the better part of four decades in Southern Mindanao. He led the formation of the New People’s Army’s first battalion-sized unit that captured an enemy general in 1999 and held him as prisoner of war for weeks. He was Leoncio ‘Commander Parago’ Pitao, “the shining red star of the revolution.” 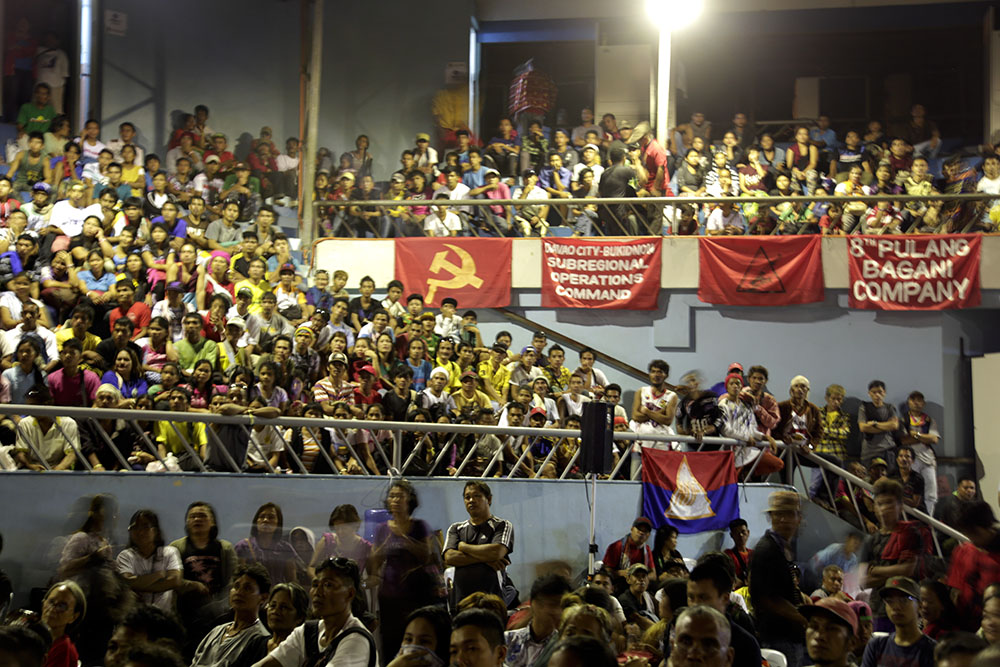 Sick and unarmed, he was mowed down by a hail of bullets last June 28, however, along with his young medic Vanessa “Comrade Kyle” Limpag. Gloatingly, Philippine Army officers told Parago’s comrades to come down the mountains to lay down their arms. 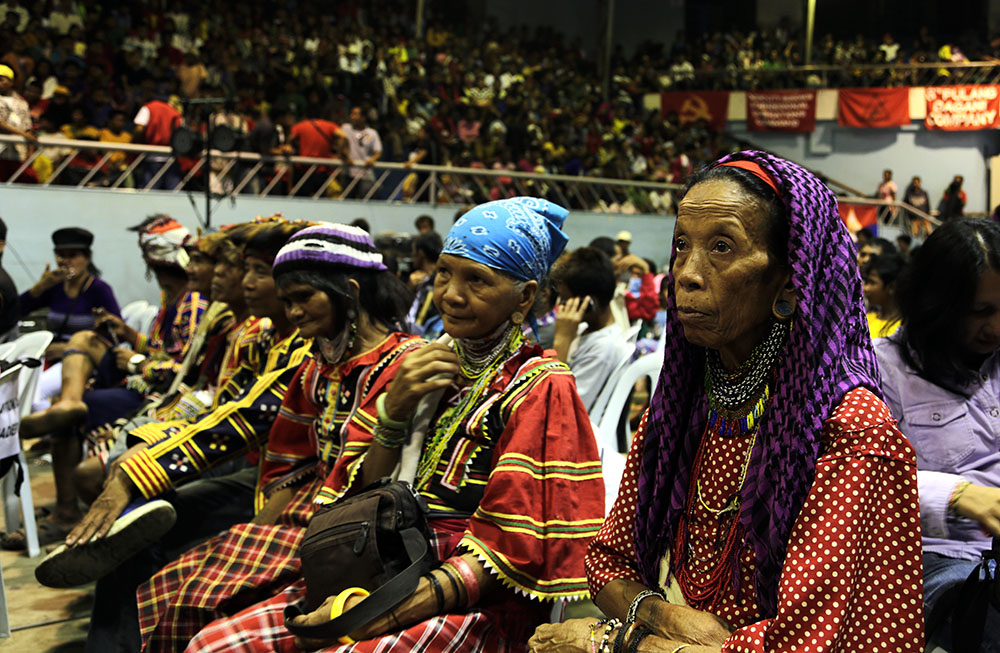 It seemed that thousands indeed have tonight. Busloads of peasants and indigenous peoples choked Almendras’ main entrance and lined up to walk up to the red flag-draped coffin on the stage. They were somber, as if it was indeed their biological father inside the simple white box. But they had no guns with them to lay down before Parago’s killers. Instead, they wore determined looks on their faces. These faces are grieving, but they do not look defeated. 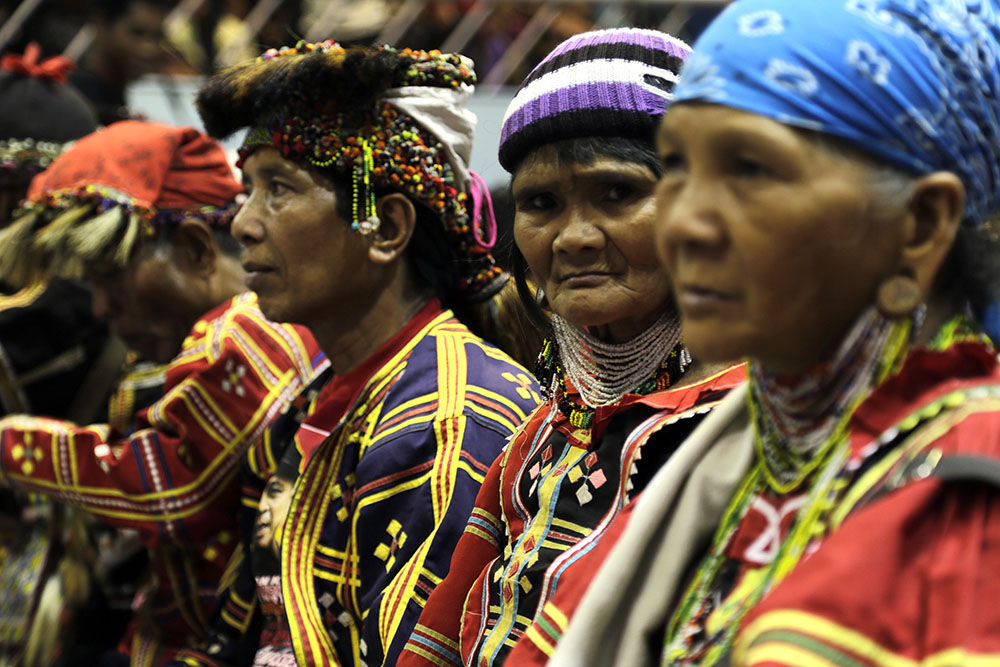 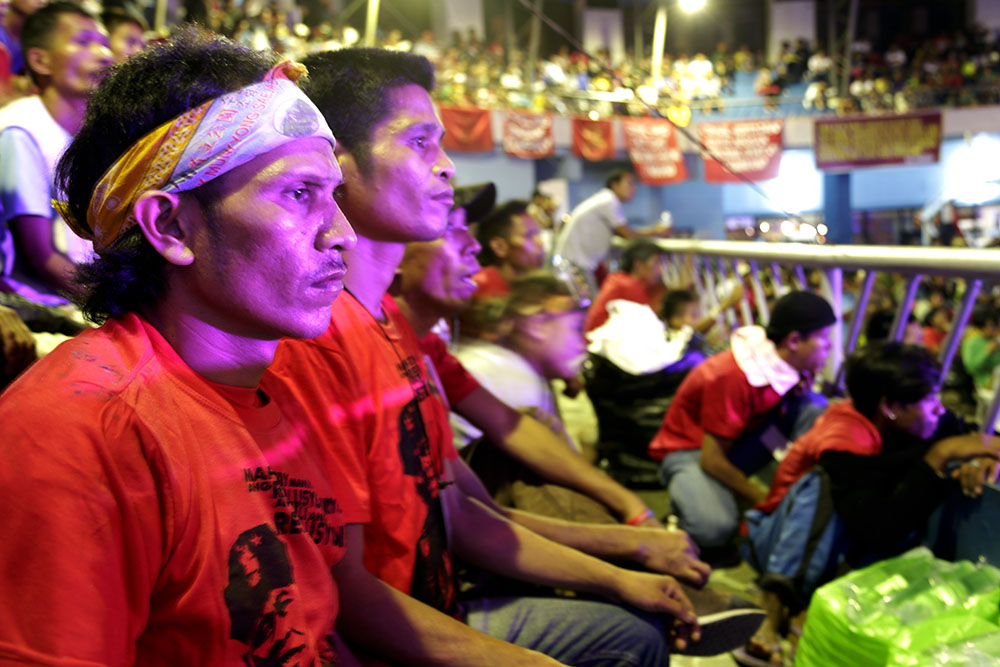 But Pitao was more than a just rebel commander to them. No one said he was cruel to his captured enemies because he was anything but. He was an exemplary organizer, an inspiring leader. He defended the poor and the persecuted against predatory businesses and despotic landlords. Above all else, he was a compassionate friend. They say that he was a father in more ways than one to the tens of thousands who have met him. 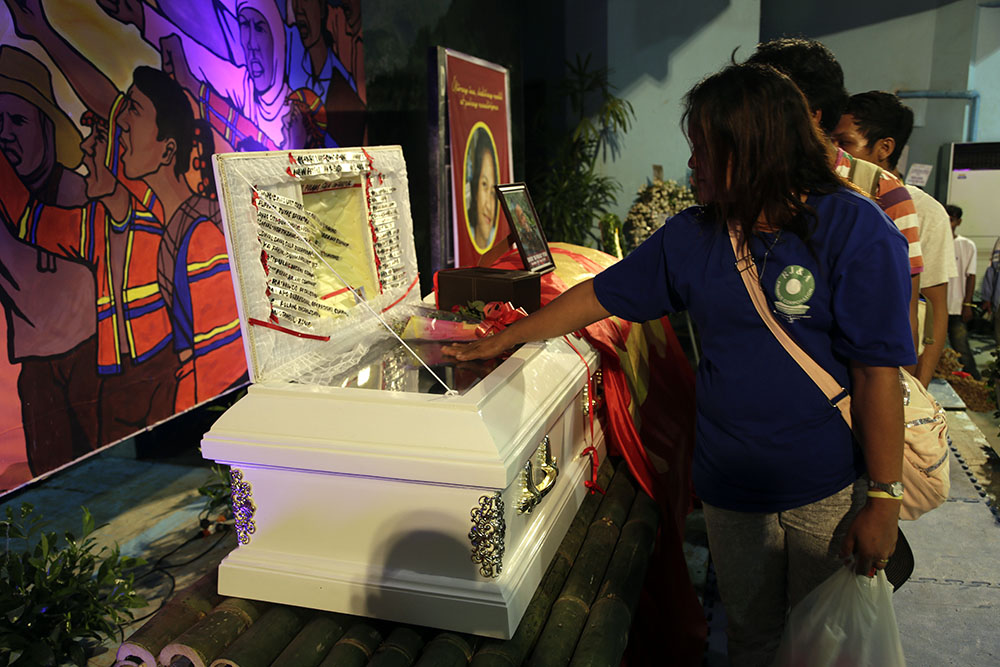 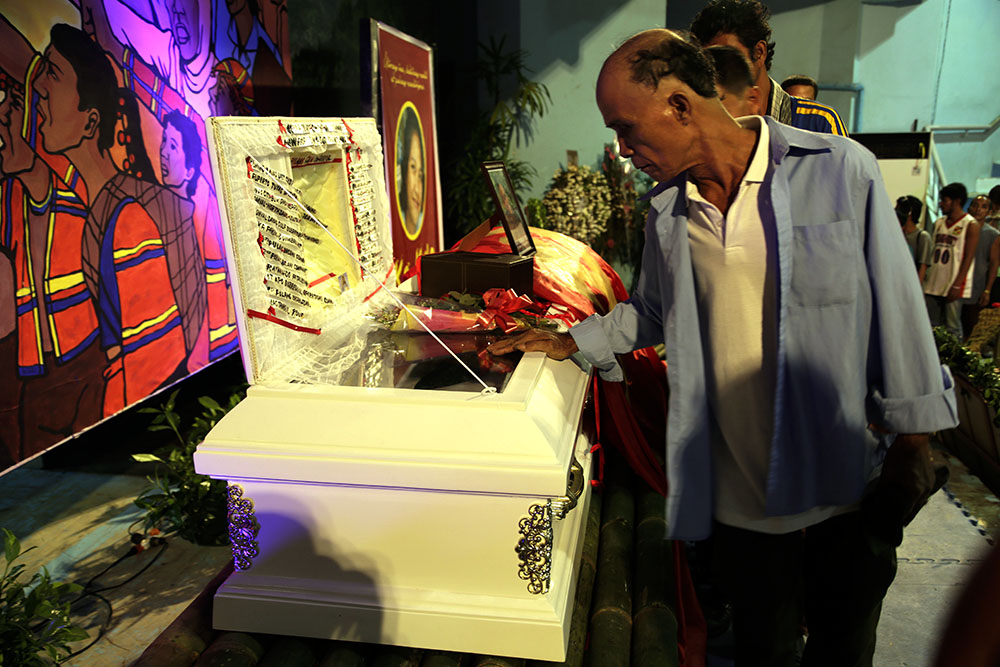 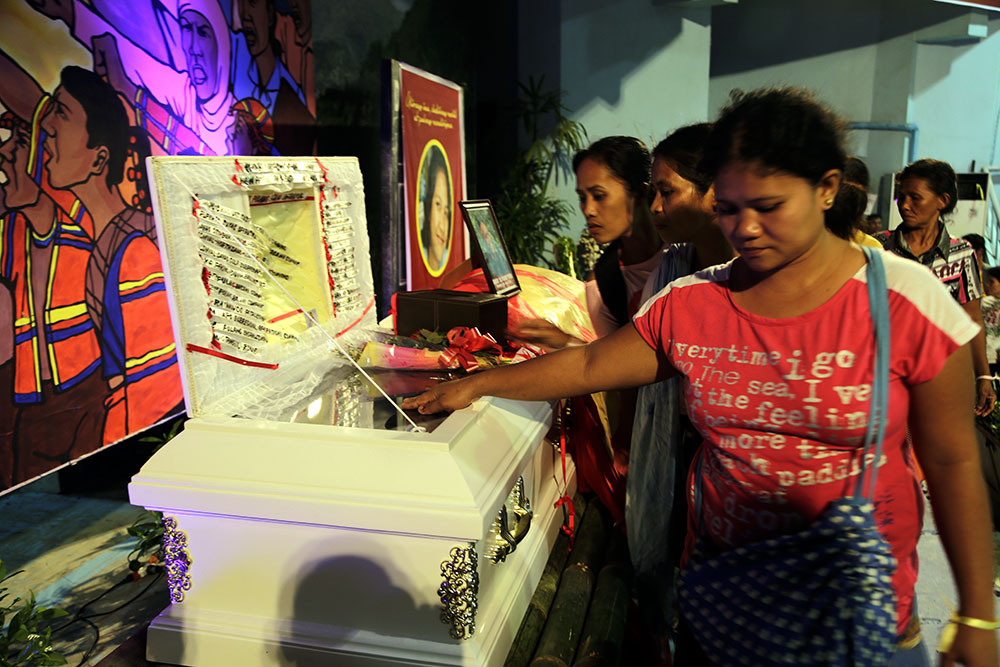 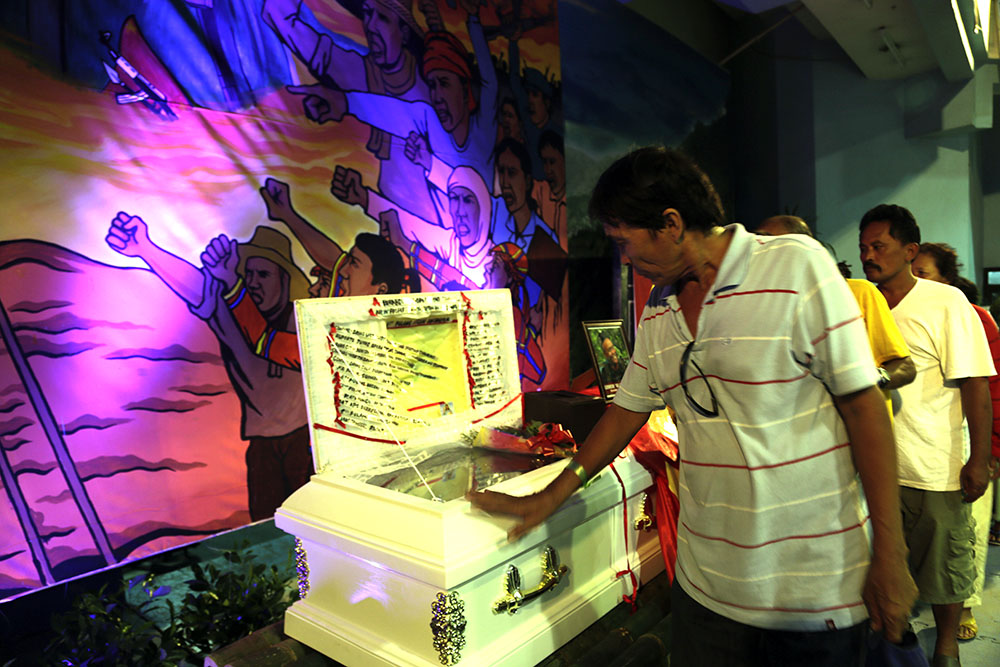 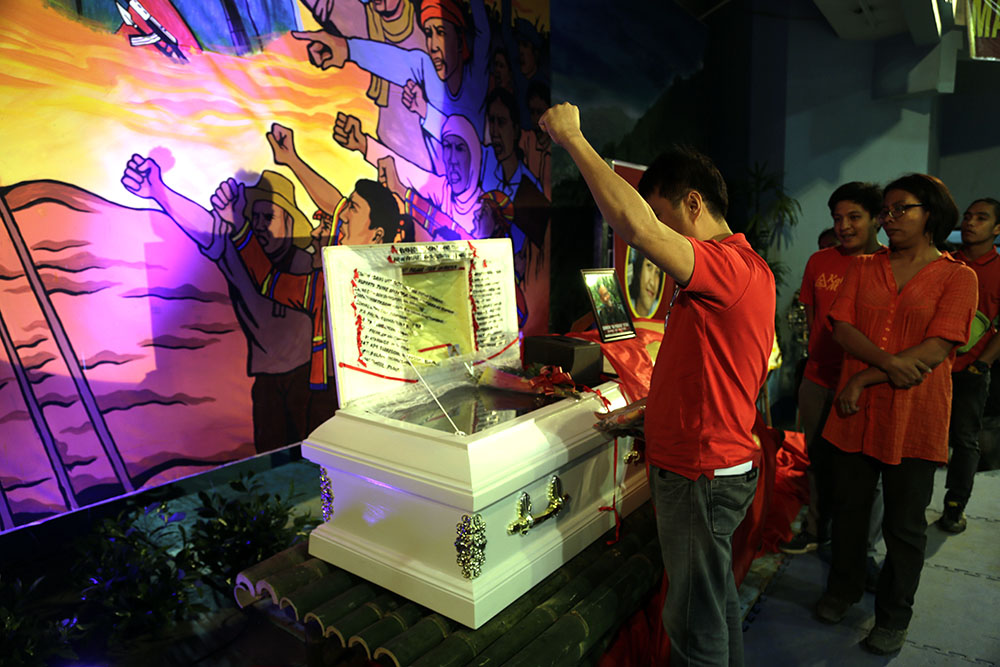 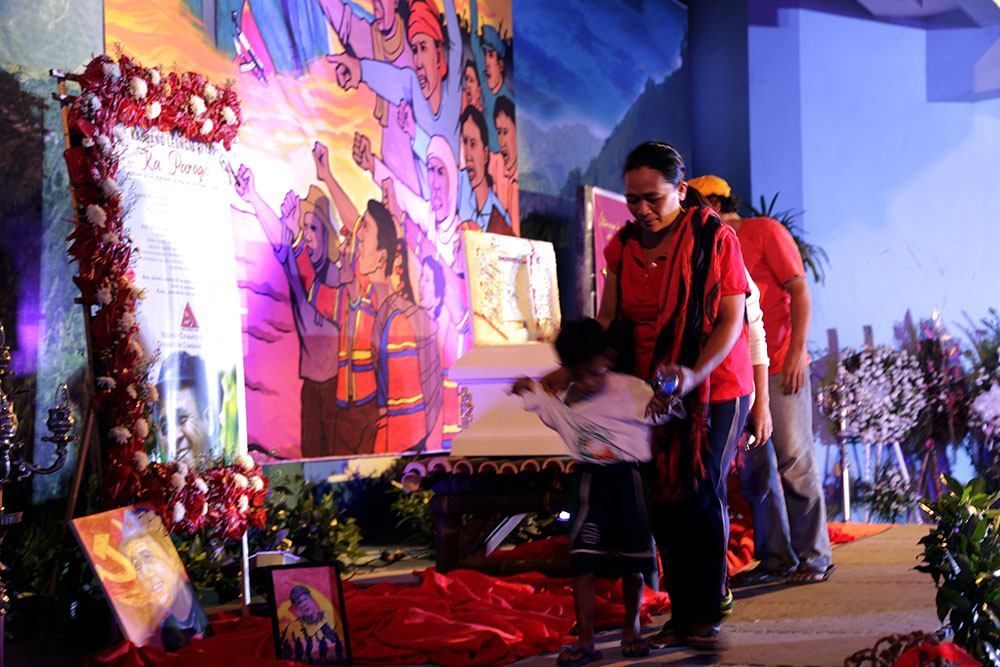 Many touched the coffin’s glass as they gaze on the dead rebel and as they leave. Some raised their clenched right fist in a militant salute. Parents raised their children to allow them to see a white-shirted corpse adorned only with a logo that was replicated in giant flags up on the rafters and around the stands. Very few made the ritualistic sign of the cross but bishops, priests and pastors abounded in the building. 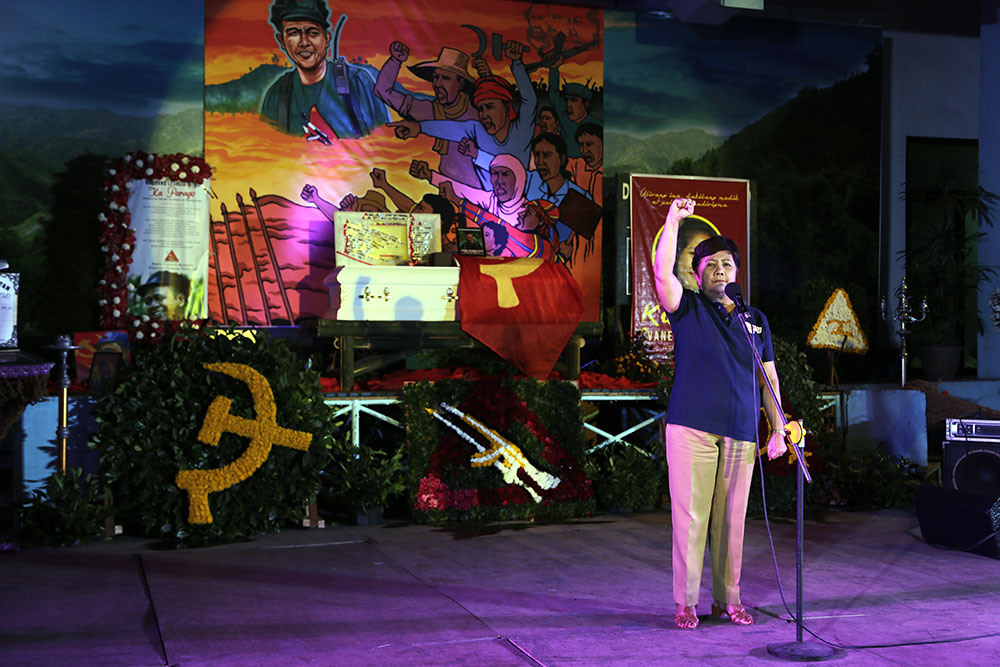 The speeches and songs were expectedly fiery. A mere few meters away from a police camp, soldiers with assault rifles stationed a few street corners away, and intelligence agents among the throng they were nakedly defiant. How could humble peasants and Lumads be so daring and brave? 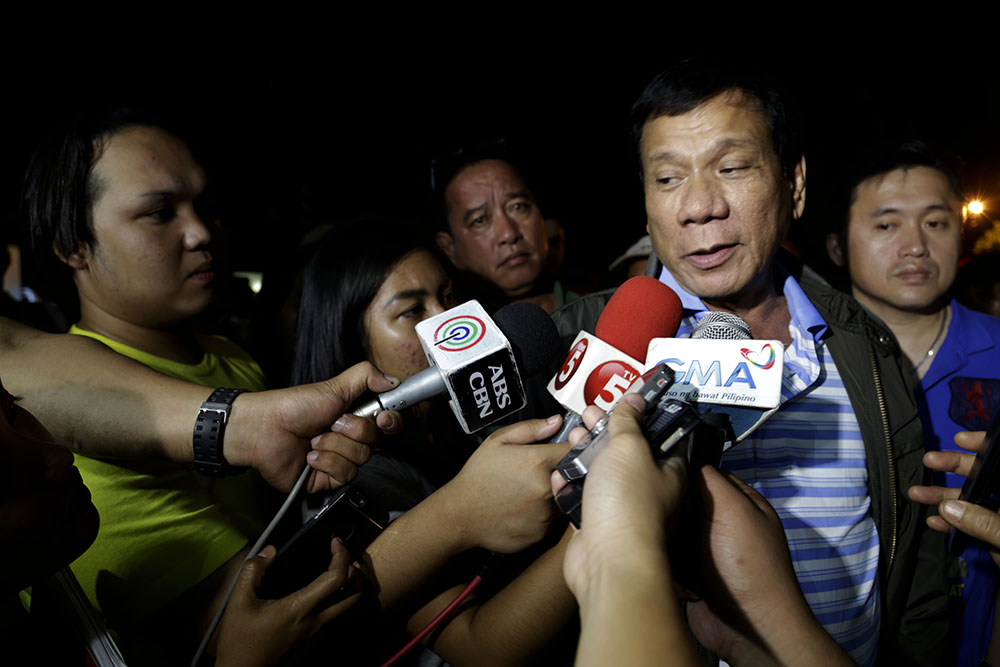 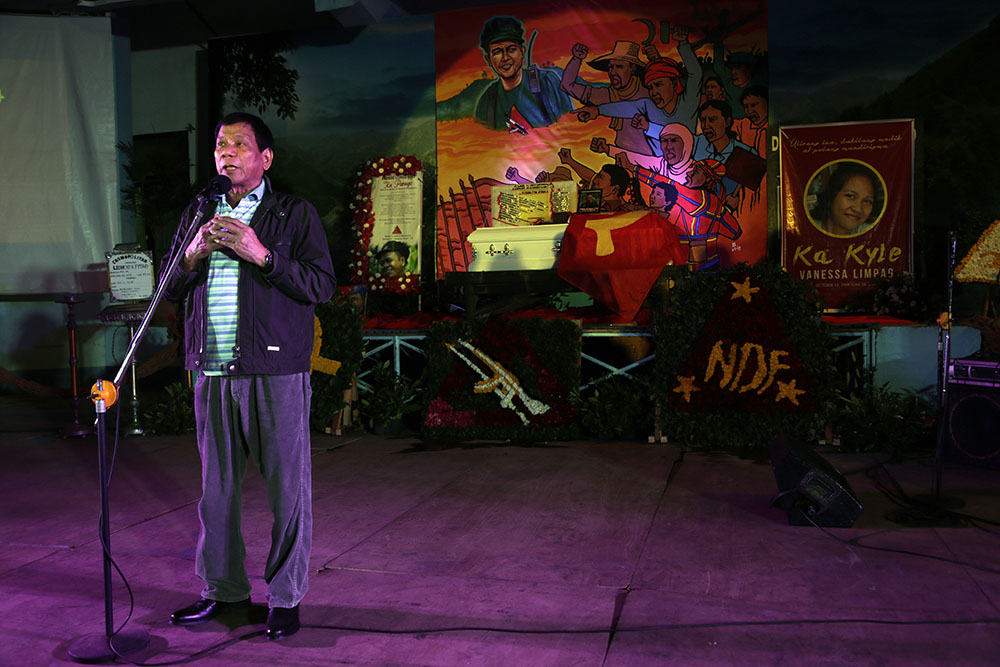 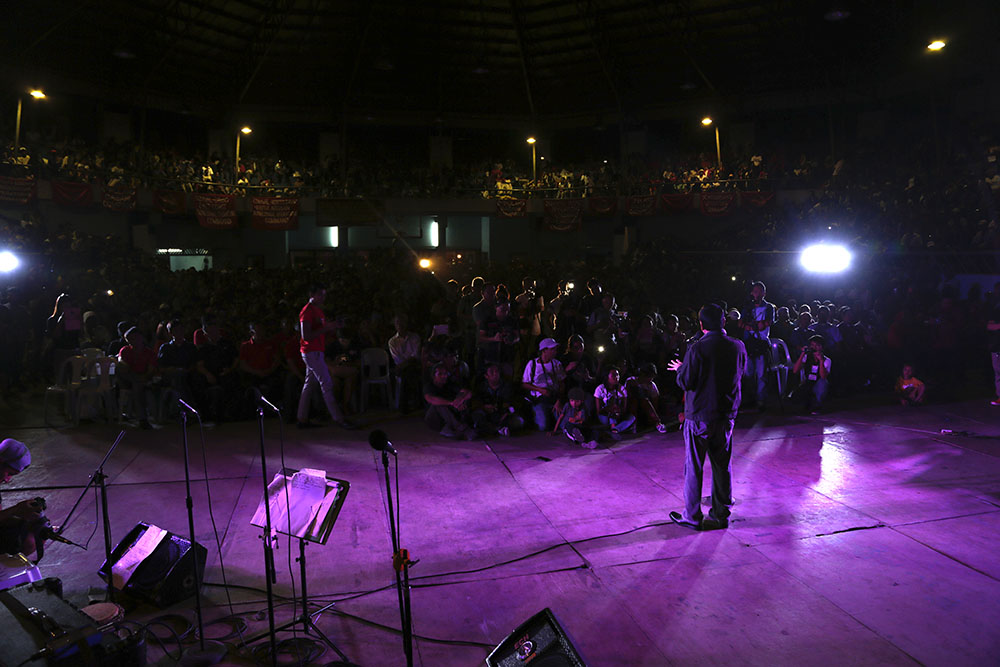 A famous person came while the tribute was well into its third hour. Video lights glared and flash bulbs fired as Davao City mayor Rodrigo Duterte walked in with his entourage of journalists and staff. Laughter greeted his jokes as he paid tribute to the dead man’s life with the poor communities of his city. In the end, however, it was not him that the people came for, but the man whose smiling face was printed on thousands of red shirts that filled the venue. 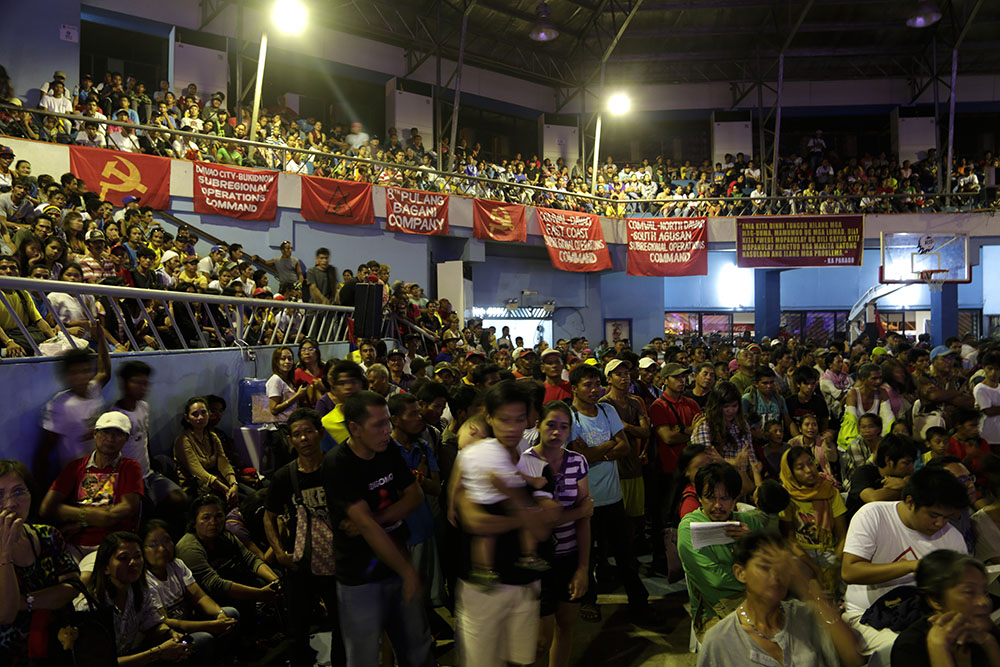 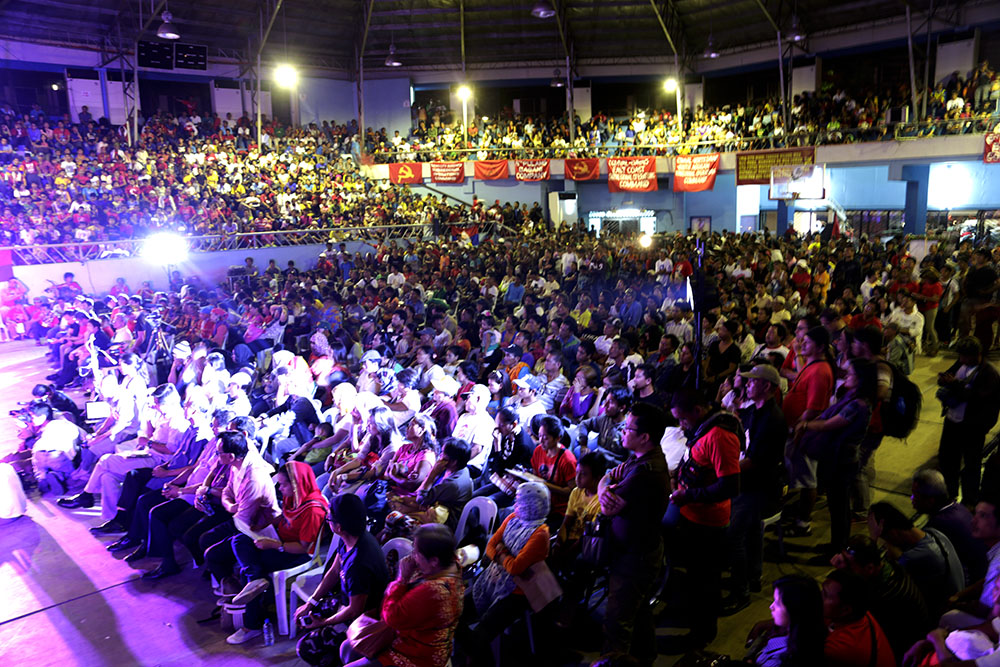 And there were indeed thousands of them. They filled the stands and the gymnasium floor. Almendras Gymnasium have run out of chairs for so many of them and so they either stood or sat on the floor throughout the lengthy program. 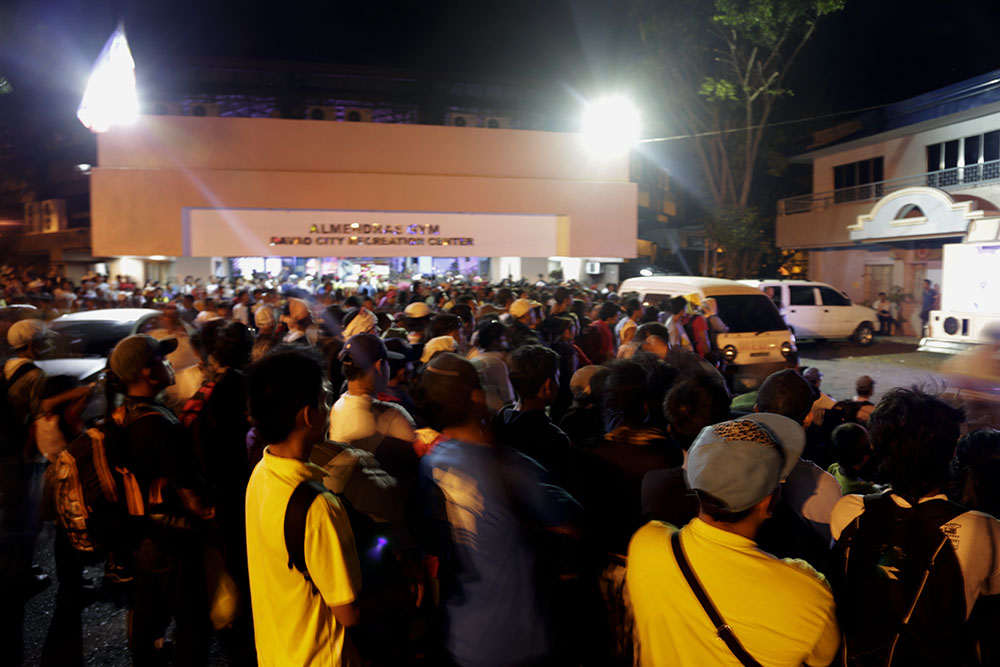 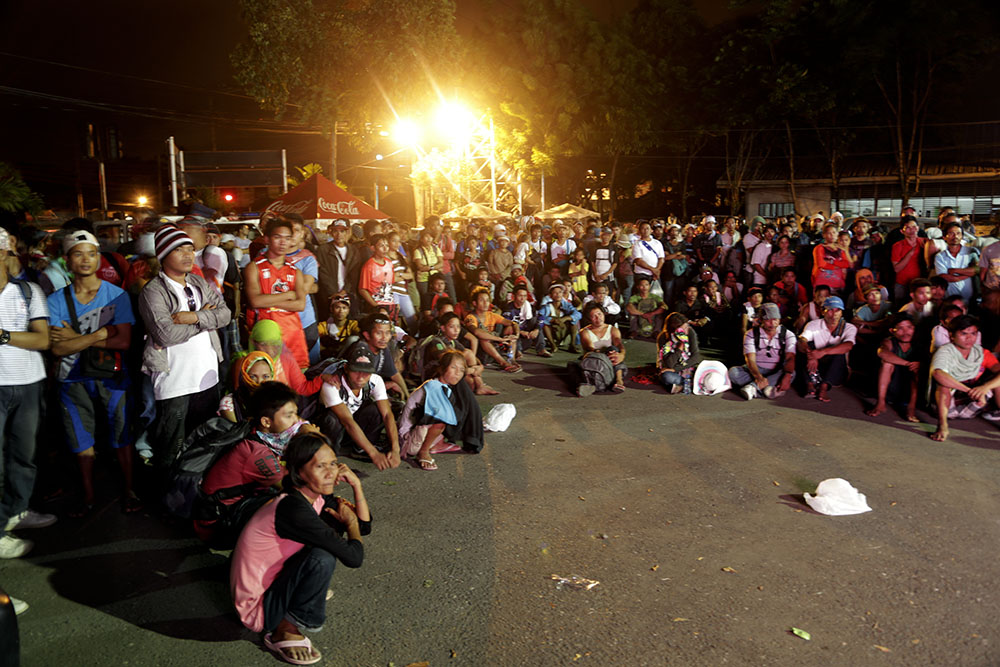 Thousands more filled the courtyard, forming an explicit wall between the people inside and those who may think of disrupting the occasion. Only Pitao’s daughter Rebelyn’s—abducted, raped, murdered and dumped at a lonely roadside in Carmen, Davao by suspected military agents in 2009—funeral march may equal the size and breath of this throng. 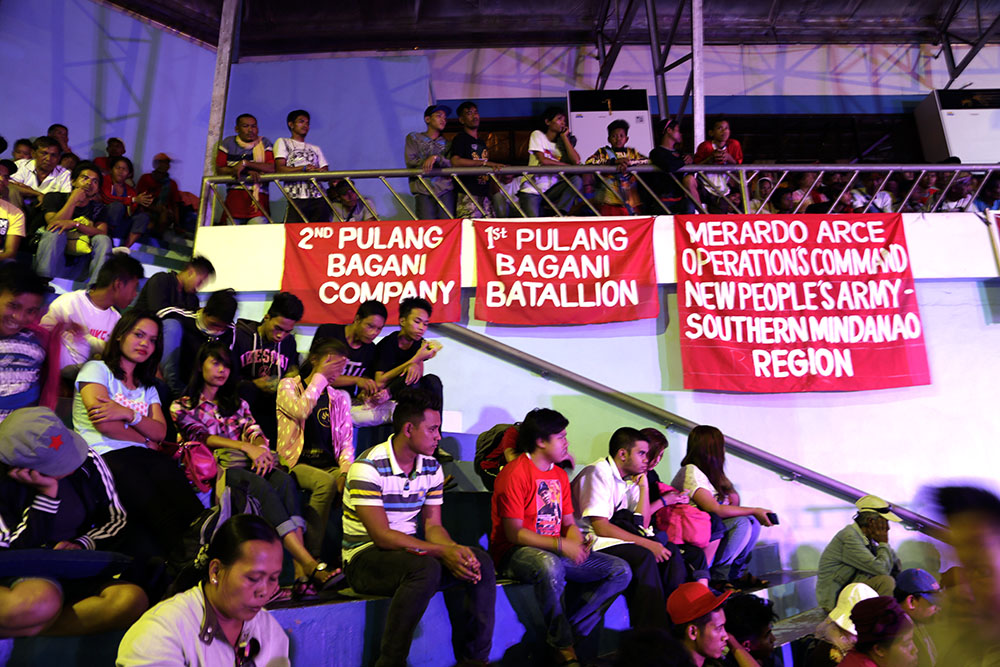 The tributes inside went well past midnight. Strong-throated youth activists on the stands exchanged shouted slogans that praised the Communist Party, its army, its popular front, its revolution and its most famous commander lying in state before all of them. 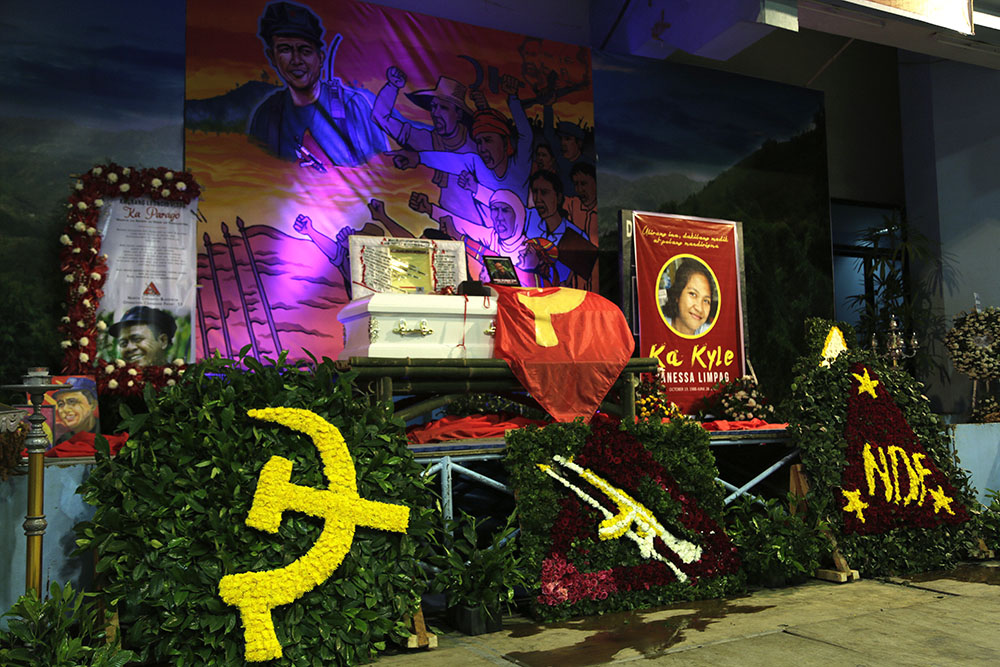 Even in death, their Tatay still unites and inspires them for their revolution.

Text and photos by Raymund B. Villanueva
Kodao Productions