DAVAO CITY – An emotional bishop of the United Church of Christ in the Philippines appeared before the members of the press on Friday morning a day after members of the Police Regional Office 11, Davao City Police Office, a paramilitary group, and undetermined members of the Army, raided their church compound. The raiders purportedly aimed to “rescue” indigenous peoples who evacuated from their communities some months ago. 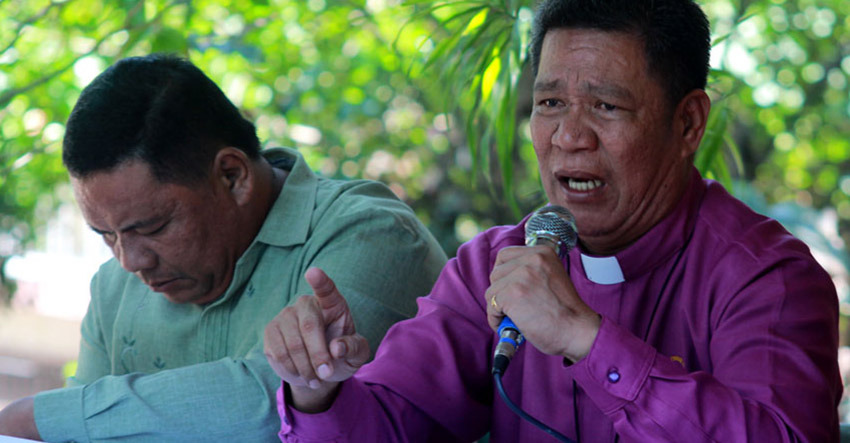 Bishop Hamuel Tequis, head of the UCCP’s Southeast Mindanao Jurisdictional Area, said he did not expect the policemen would storm their church compound which they call as a Peace Sanctuary.

“Yesterday I realized that they ruined the image of the church, they disrespected it,” Tequis said.

Reverend Jerome Baris narrated during the press conference that at around 7 am Thursday he arrived at the Haran Mission Center to facilitate a paralegal training workshop of the UCCP.

“After a few minutes, my attention was called by (Reverend Sarly Templado) because there are people from the Philippine National Police and other government agencies in front of the church’s premises,” Baris said.

The negotiations were joined by officials from the Department of Social Welfare and Development, the National Commission on the Indigenous Peoples, tribal leaders and village officials.

Baris said he was able to talk with the representatives including Pedrita Dimakiling, head of the Community Based Service Unit of the DSWD-11, at their mission center’s living room. The latter informed them that “they want to take with them the lumads from the evacuation center as a maximum objective, and as a minimum objective, to get the sickly children and mothers to provide them with proper medical attention at the DSWD regional office.”

After the DSWD has informed them of their objective, Baris said they consulted with the tribal leaders.

The tribal leaders refused to go back, saying the army have not yet pulled out of their communities.

Baris said they requested the DSWD representatives to inform their office of the decision of the tribal leaders.

Baris said they also asked that the services the government wants to give to the evacuees would “complement” the church’s intervention in the sanctuary.

Baris said after their dialogue, they went down, but he was shocked that a commotion between the police and the evacuees had already started.

He said he assisted in the negotiation with the police “to prevent the PNP and other elements who are forcibly entering the premises of Haran.”

He was hit by two men in plain clothes. They pulled him, tearing his polo and causing him to lose his reading glasses.

Meanwhile, Senior Inspector Milgrace Driz, spokesperson of DCPO, said the violent incident would have not ensued if the police had been permitted to enter the Haran compound.

“We only want to give service to them, that is part of our job,” Driz said, adding that the DSWD requested their assistance.

Driz said there were “more or less 500 policemen” on Thursday. She said the DCPO deployed around 300 police and they were augmented with more or less 200 from the Civil Disturbance Management Unit under the Regional Public Safety Battalion of the PRO 11.

Driz said it was a joint effort because those involved were not from Davao City. More than 700 indigenous people from Talaingod and Kapalong in Davao del Norte and some parts of Bukidnon provinces sought refuge in the Haran Mission Center last April.

Tequis said the UCCP church aims to assist the “poor and the marginalized like the Ata-Manobos.”

“Our fellow Ata Manobos sought help and refuge in our church since 1995, the first of a series of internal displacement due to militarization. Providing them sanctuary in our peace haven is a duty we embrace arising from our own Declaration of Principles,” the UCCP said.

“But what they did yesterday was they showed a picture of how they violate human rights,” Tequis said.

“What they did to the Ata-Manobos was they violated their right to live peacefully,” he said.

Tequis also refuted the claims of Catamco who said they were padlocking the IPs inside the compound.

“The cases of attempted murder, trafficking, kidnapping, Violence Against Women and Children – are those the handiwork of someone who serves God? Those accusations show no respect and no recognition of the sanctity of a life lived in service to God,” Tequis said.

“We are outraged at this show of excessive force, moreso because the PNP did not have any warrant to enter and search the Church facility, which is a private property,” said the UCCP.

The UCCP added they are considering to file charges against Col. Mervin Pepino, officer-in-charge (OIC) city director. He was the deputized ground commander during the incident which they said was illegal.

However, Driz said they are only acting on a complaint they received.

“They (DSWD) requested our assistance to go with them to Haran and carry out the rescue. We don’t have search warrant or warrant of arrest, we were not there to search, we were there to rescue,” Driz told Davao Today.

She said if there will be cases filed against them, they will face it.

Driz also said they will file charges against those they identified as the persons who hurt their police officers, PO3 Christopher Ararao and PO3 Robert Basan of the Investigation and Detection Management Branch.

Fifteen persons, most of whom came from the evacuees and support groups, were reportedly injured during the incident.

Driz said cases of physical injuries and direct assault will be filed against Juno Marteen Vegas of the League of Filipino Students, Opeh Ocir of Kabataan Partylist and Tony Salubre of Kilusang Magbubukid ng Pilipinas.