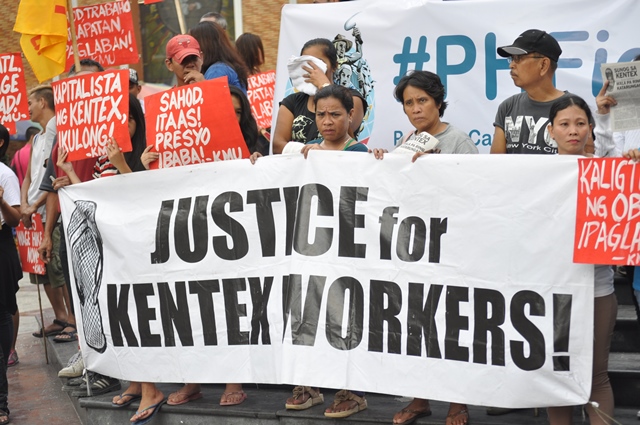 They said justice is being delayed and denied to the fire victims and survivors.

The Valenzuela Prosecutor’s Office has so far deferred action on criminal cases filed by the workers and the government; the Ombudsman has so far done nothing on the administrative charges filed by the workers; the Social Security System still has not filed cases against Beato Ang and Ongkin Guan, the capitalists of Kentex, or even against Cynthia Dimayuga, owner of CJC Manpower Services, despite workers’ claims that both had failed to remit their contributions to the fund.

“It’s been six months and there’s still no justice. This is most revolting, given the fact that more than 74 workers lost their lives in the fire,” said Jerome Adonis, KMU secretary-general.

The labor leader noted that based on the Aquino government’s actions, all it thought it needed to do is give financial compensation and assistance to the victim’s families and the survivors.

Exacting accountability, he said, is apparently not in the government’s to-do list, even though “The death of many workers show there were grave violations of safety standards.”

In the protest, KMU also condemned Labor Department Order No. 18-A Series of 2011, which was signed by Pres. Noynoy Aquino on November 13, 2011, setting the guidelines governing contractualization in the country.

KMU said the labor department’s order legalizing contractualization is linked to the death of Kentex workers.
Experiences have shown that workers who are more easily fired and replaced are often without unions and have little say in their working conditions.

When the department order was signed, the Aquino government promised the regularization of contractuals. But Adonis said that after four years, contractualization has only spread further.”

The workers are also not buying into the rosy claims for APEC being bannered by the government. They condemned the upcoming Asia-Pacific Economic Cooperation (APEC) Summit, saying this would worsen joblessness and poor quality jobs in the country. 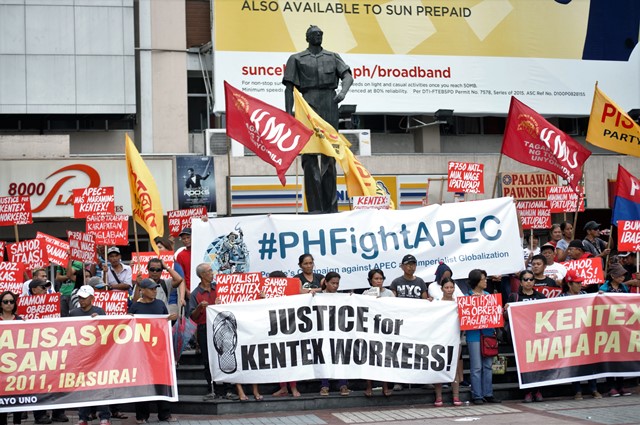 What is there to be excited about in APEC, the workers’ group asked, pointing to the traffic diversion, cancellation of flights during the APEC summit, the billion-peso hosting budget, and the protest ban in Manila.

“Almost 20 years after the country first hosted an APEC meeting, unemployment and underemployment has spread. Wages are lower than before, contractualization is more widespread, the number of workers in unions and covered by CBA’s has decreased, and workplaces have become more dangerous,” Adonis ended.