#15yearsofBulatlat | ‘One of the best independent news outfits’ — veteran journalist 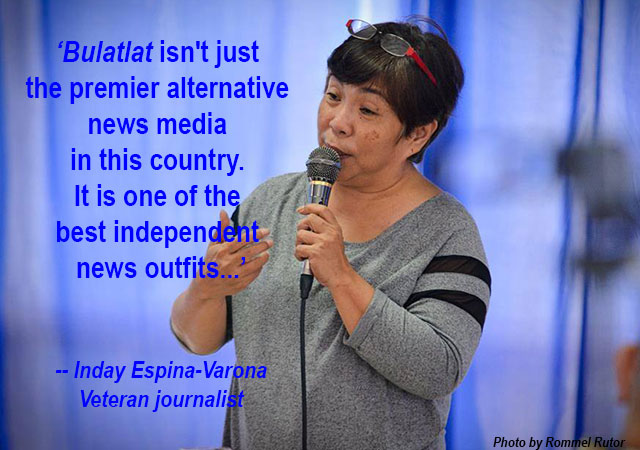 Bulatlat isn’t just the premier alternative news media in this country. It is one of the best independent news outfits, as seen by the awards it has won side by side with the more established big media firms.

It has been an honor to have partnered with Bulatlat during it’s early growth years, choosing it as a contributing news service for the Philippines Graphic magazine. The depth and breadth of your political, economic and cultural coverage greatly helped the Graphic in fulfilling its mission to “cover all angles.”

As media technology challenged the profession to adjust to the audience’s changing needs and wants, Bulatlat has ridden the wave with its use of video and and multi-media, without compromising its core mission to educate Filipinos and friends abroad on the complex issues that grip the country.

Here’s looking forward to another 15 years of rock and roll!

Inday Espina-Varona is a columnist for ABS-CBN online. She was a former national chairperson of the National Union of Journalists of the Philippines (NUJP)