Commemorating Cordillera Day on April 24, progressive groups remember the heroes and martyrs of the region who selflessly contributed to the struggle for national democracy and the indigenous peoples’ right to self-determination. Many were killed by state forces, like Ama Macli-ing Dulag, while many died in the battlefield as armed revolutionaries.

Still, there are those who were disappeared and whose fate remain uncertain, as their families remain hopeful to be reunited with them someday.

One of them is James Balao, founding member of the Cordillera Peoples Alliance (CPA) who should have turned 55 on April 19.

On Sept. 17, 2008, James was walking in Tomay village, La Trinidad, Benguet when five men seized and handcuffed him and forced him into a waiting car. As James resisted and called people’s attention, the men said he was a “drug pusher” and they were taking him to the police headquarters in Camp Dangwa.

Weeks before, James had told his siblings that he is being tailed by military agents in a car. But when James’ family and colleagues came searching, the police and military denied having him in their custody.

James has been missing for more than seven years.

The brains and conscience

James Balao is the eldest of four children of a Kankana-ey and Ibaloi family from Benguet province. He graduated with a double degree in Economics and Psychology from the University of the Philippines-Baguio, where he also served as editor-in-chief of the campus paper, Outcrop.

To his siblings, he is the Manong (older brother) whose book collection is a treasure trove of knowledge and wonder that encouraged in them an appetite to read. His sister, Nonette, called him the “brains” among them, who shares what he knows, but never in a boring way.

“He can even make the most nonsensical things into something significant, and make us amazed at how he enjoys life,” Nonette said. She recalled how James served the Cordillera staple coffee as exquisite-tasting mocha or latté, long before designer coffee became a fad.

James’ affectionate nature, coupled with the activist’s tools in seeing the big picture and interrelation of things in society, made him the perfect counsellor, the go-to for solutions to their problems, guidance and advice to different undertakings, and life in general.

“When in trouble, reach James. He has the answers,” said Joni Balao-Strugar, James’s youngest sister.

As a youth activist, James served as an example to his siblings who later also became student activists. His younger brother, Winston said James never pushed him to be politically involved, although he did bring him along in his coverage of stories for Outcrop. He recalled how he once tagged along with James as he interviewed families displaced by the construction of Marcos hi-way and a park in Tuba, Benguet.

“He let me judge for myself the bad things that are happening in our society and the system of government. I joined activist groups on my own,” Winston said.

He remembered a quote repeated by James, which sometimes made him guilty for not contributing enough to cause-oriented groups. “If you’re not part of the solution, then you’re part of the problem,” James often said.

James became an activist during martial law, at a time when the Igorot tribes were astir as they defended their ancestral lands and communities against various government development aggression projects. The biggest of these were the Chico River dam projects that span the provinces of Kalinga, Mt. Province and Cagayan, and logging by Cellophil in Abra.

On April 24, 1980, the killing of Ama (father) Macli-ing Dulag by government soldiers only served to fuel the prairie fire that was the indigenous peoples’ spontaneous resistance to threats to their lands. It eventually led to the formation of the CPA in June 1984, the expression of unity of various Cordilleran tribes and their assertion of the right to self-determination, within the framework of the struggle for national liberation. 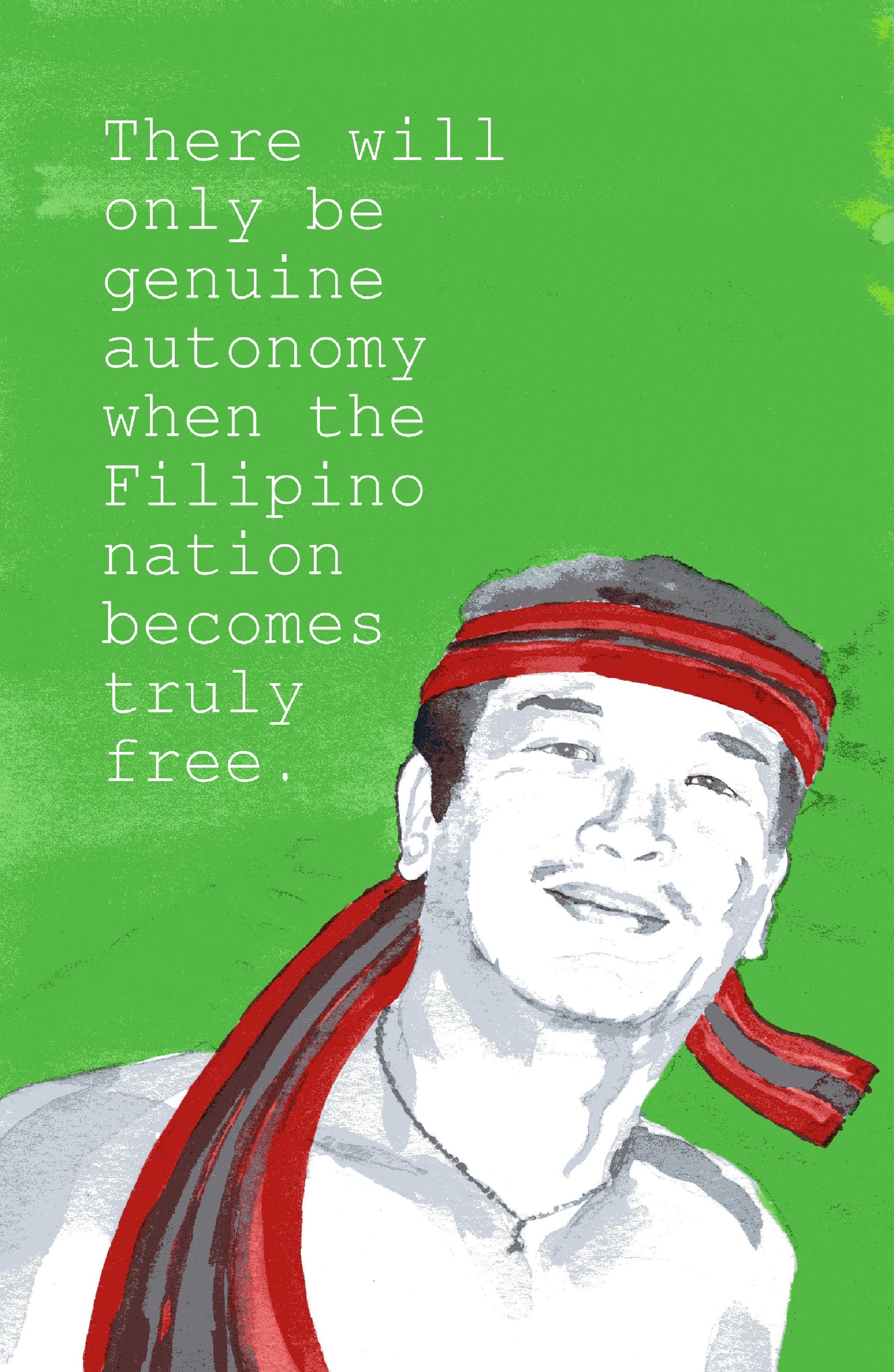 James, who has been part of researches and studies on the Cordilleras even as a student, was a member of the Cordillera Consultative Committee which prepared for the CPA founding. He served a key role in research and documentation, education and information dissemination, organizing and support-building in the group’s early years.

Fernando Mangili, spokesperson of Amianan Salakniban , the interregional alliance in Cordillera, Ilocos and Cagayan Valley, remembered James as an intellectual who was a bold and compelling speaker. Mangili, who was then also a young activist from Itogon, Benguet, said James led educational discussions on ancestral lands, the indigenous peoples’ rights and various issues.

Mangili recalled that James hoped there would be more activists among the Igorot youth, who would emulate the bravery of their ancestors. The Cordilleran tribes are after all, warrior societies which fiercely defended their territories against Spanish colonizers.

In 1986, James worked as a staff of anthropologist Ponciano Bennagen, whom President Corazon Aquino appointed as member of the Constitutional Commission (Concom) which drafted the 1987 Constitution.

Mangili recalled that CPA was campaigning for the inclusion of the indigenous peoples’ right to self-determination into the Charter. In one of the Concom’s session, Cordilleran leaders who sat in the gallery unfurled streamers and banners calling for Cordilleran autonomy, which attracted the attention of the Concom members and the media.

With the tight security, how did they manage to bring in their propaganda material? James, whose bag did not go through security inspection, was the one who sneaked in the streamers, Mangili said.

Mangili said their campaign for genuine Cordilleran autonomy goes beyond the provision eventually included in the 1987 Constitution and implemented as the Cordillera Autonomous Region (CAR). He said it was clear to the CPA that the struggle for ancestral domain and right to self-determination is within the whole framework of the Philippine struggle for genuine social change.

“There will only be genuine autonomy when the Filipino nation becomes truly free,” James has asserted, Mangili recalled.

In 1988, James was arrested and briefly detained for “possession of subversive documents,” which was eventually dismissed for lack of evidence.

In the 90s, he worked with the Ifugao Research and Development Center, and later helped establish the Ifugao Peasant Leaders’ Forum.

At the time of his abduction, James was president of the Oclupan Clan Association and was in charge of the documentation and registration of the clan’s properties.

The Balao family and CPA filed a petition for writ of amparo (protection) in October 2008, three weeks after his abduction. The Benguet Regional Trial Court Branch 63 granted the petition on January 19, 2009, and ordered the respondents to disclose where James was being detained. President Gloria Arroyo and various local and national military and police officials were the respondents.

The court, however, did not give an order allowing inspection of various military and police camps. In December 2011, the Supreme Court overturned the writ of amparo and issued a decision absolving Arroyo from the case. The high court also ordered the PNP and AFP to continue the investigation of James’ disappearance.

In spite of such legal setbacks, the Balao family, James’ friends and colleagues remain hopeful ever since they issued a mabtad, the Cordilleran call for community search for a missing kin, which has extended to national and international realms. Along with the other families of the disappeared, the search for James carries on as they search for justice.

Some quotes in this article came from the book “Pagtatapo sa Kabilang Dulo, Panitikang Testimonial ng Desaparecidos,” published in 2009 by the Families of the Desaparecidos for Justice (Desaparecidos), the Amado V. Hernandez Resource Center, in cooperation with the Taiwan Foundation for Democracy.