“The ongoing killings by law enforcers in the name of the war on drugs and without due process, is not any different from what the police and military under Jovito Palparan, Arroyo and Aquino did to activists and media workers who criticized government.”

MANILA – Embattled Senator Leila de Lima found an unexpected ally in a peasant group, which backed her push for next week’s senate investigation into drug-related summary executions, amid President Duterte’s personal attacks against her.

President Duterte publicly shamed De Lima in speeches, alleging that she had an adulterous relationship with her driver, who allegedly received pay-offs from convicted drug lords inside the National Bilibid. De Lima responded that the President’s tirade was meant to stop her from leading the investigation.

Kasama-TK and other human rights groups have frequently criticized De Lima for slow action against cases of human rights violations as justice secretary under the Aquino administration. This time, the group encouraged her on her stand against killings.

Marcellana stressed the need to expose the perpetrators of extrajudicial killings of drug suspects, which he said are similar to the killings of activists under the government’s counterinsurgency programs Oplan Bantay Laya and Oplan Bayanihan during the administrations of President Gloria Arroyo and President Benigno Simeon Aquino.

“The ongoing killings by law enforcers in the name of the war on drugs without due process is not any different from what the police and military under (retired Maj.Gen) Jovito Palparan, Gloria and Aquino did to activists and media workers who criticized government,” he said.

The group cited the killing of Marcellana’s wife, Karapatan-ST secretary general Eden Marcellana, and Kasama-TK chairman Eddie Gumanoy, who were abducted and brutally killed by soldiers of the 204th Brigade in Mindoro and its paramilitary death squad “Bonnet Gang” in 2003.

Documentation of political killings by human rights group Karapatan from 2001 to 2015 shows 179 victims killed in Southern Tagalog, out of the 1,206 killed during Arroyo’s term, and 22 out of the 307 total killed under Aquino.

On drug-related deaths, monitoring by ABS-CBN Investigative and Research Group puts the number at 1,103, from May 10 to August. Those killed during police operations are at 666, those killed by unidentified assailants are at 343, and there were 94 dead bodies found with cardboard signs which said “drug pusher/addict.”

Some groups have also likened the police anti-drug Oplan Tokhang to the “census” and house-to-house activities conducted by soldiers in the countryside, as they supposedly implement “Community Organizing for Peace and Development (COPD),” but in effect, harass residents into “surrendering” and falsely confessing as supporters or members of the New People’s Army (NPA).

The police “shame-game” against drug suspects followed by “mass surrenders” are also reminiscent of how peasants in “NPA-infested villages” were red-tagged and forced into “mass oath-taking,” which sowed fear and terror in communities and filled police and military accomplishment reports, but did not address the roots of armed conflict. 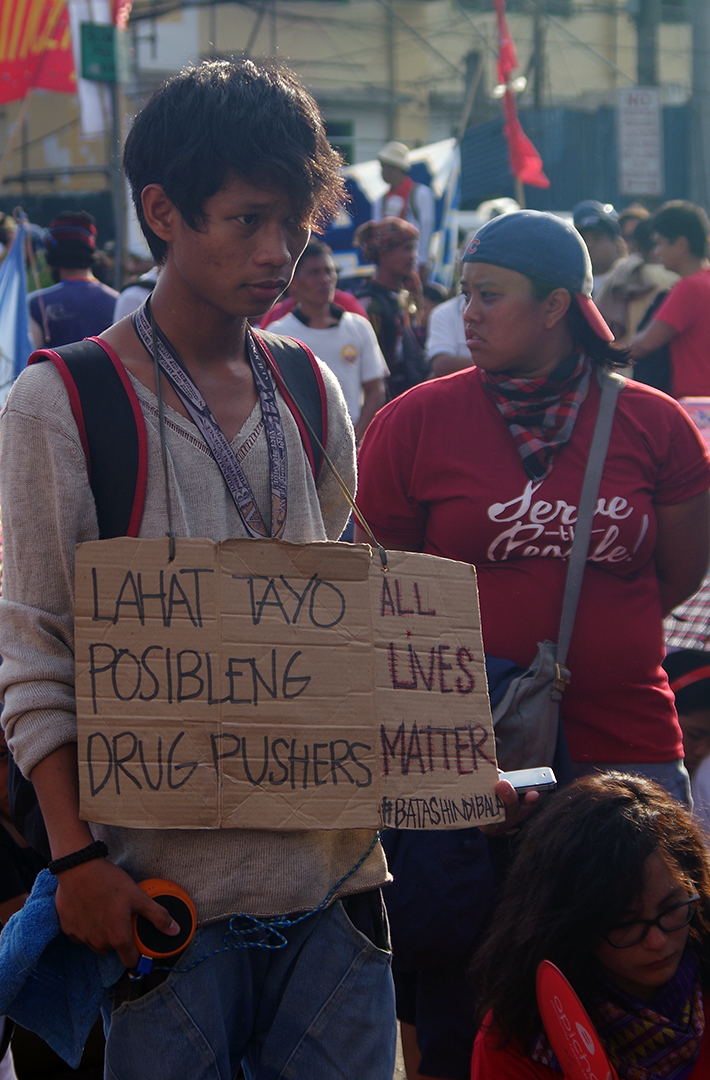 In Southern Tagalog, indigenous peoples in Antipolo City, Rizal and peasants in Batangas recently decried that such forms of harassment continue as Oplan Bayanihan remains in force under Duterte.

Marcellana stressed the right to due process, as he said “only ordinary people are becoming victims of summary executions.” He encouraged families of victims of drug-related killings to break their silence and fight against injustice.

“We call on the families of victims of killings to file complaints in the courts and in the Commission on Human Rights against the involved abusive police men,” he said.
Marcellana called on De Lima and the public now to be cowed, and to continue denouncing human rights abuses.

“It is better for President Duterte to focus on the issue, and avoid personal attacks on Senator De Lima; and if she is involved in a drug syndicate, then she should be investigated and punished in accordance with the law,” Marcellana said.

Government should uphold the people’s rights and also give a chance to drug users and pushers and rehabilitate them to be productive citizens of the country, he said.