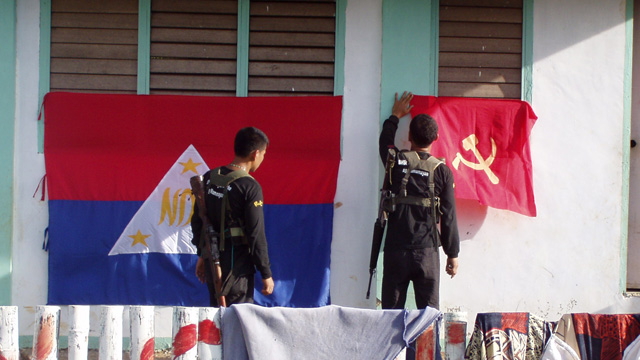 The CPP’s Central Committee and the NPA’s National Operational Command said the interim ceasefire takes effect today and will remain valid during the course of peace negotiations until superseded by a joint ceasefire agreement or until a notice of termination of the said ceasefire declaration takes effect.

The CPP’s Central Committee and the NPA’s National Operational Command said the interim ceasefire takes effect today and will remain valid during the course of peace negotiations until superseded by a joint ceasefire agreement or until a notice of termination of the said ceasefire declaration takes effect.

The CPP said the interim ceasefire aims to further promote peace negotiations between the NDFP and the GRP and boost efforts to accelerate it.

No attacks, on defense mode

The CPP’s Central Committee and the NPA National Operational Command have ordered all NPA units and people’s militia to cease and desist from carrying out offensive military campaigns and operations against state security forces.

The CPP and the NPA said personnel of the Armed Forces of the Philippines and Philippine National Police who have no serious liabilities will not be subjected to arrest or punitive actions.

All units of the NPA and the people’s militias will be on defensive mode at both the strategic and tactical levels and maintain a high degree of militancy and vigilance against any hostile actions, provocations or movements of the enemy armed forces, the declaration stated.

“Active-defense actions shall be undertaken only in the face of clear and imminent danger and actual armed attack by the enemy forces and only after exhausting counter-maneuvers to avoid armed encounters,” the CPP and the NPA said.

The CPP and the NPA called on all its leading organs and branches, commands and units of the NPA and people’s militias and revolutionary mass organizations to monitor any hostile actions, provocations or movements carried out by the enemy armed forces that undermine the spirit of the ceasefire declarations.

In a previous statement dated Aug. 26, the CPP criticized AFP units for maintaining their presence and continuing to make aggressive moves in and around the areas of operations of the NPA.

“The presence and operations of the AFP in rural communities undermine the credibility of the Duterte government among the people as it projects an image of disunity within the GRP or refusal of the AFP to abide by the order of its commander-in-chief,” the CPP said.

The NPA will continue to enforce policies and laws of the people’s democratic government, perform appropriate functions of governance, and mobilize the people and resources in territories under its authority.

These include maintaining peace and order including suppression of criminal groups such as drug traffickers and operators of the drug trade and large-scale gambling, private armies and private armed groups of warlords, local tyrants and vigilante groups, as well as spies; enforcing local economic policies pertaining to land rent, usurious loans, wages and others; and, enforcing policies for the protection of the environment and defense of the interests of national minorities, peasants and workers affected by large-scale mining, logging and plantation operations.

The NPA will continue to dispatch its forces to carry out educational campaigns especially on progress of peace negotiations, cultural activities, medical missions and production support campaigns.

“The revolutionary forces in the Philippines look forward to vibrant talks in the course of the next few months to discuss (a) social and economic reforms, (b) political and constitutional reforms, and (c) end of hostilities and disposition of forces,” the CPP said in a statement.

The CPP said the issuance of interim ceasefire declaration is further encouraged by the prospective release of all political prisoners and remaining detained NDFP consultants. The CPP said these prisoners were arrested under the Arroyo and Aquino regimes in violation of the Comprehensive Agreement on Respect for Human Rights and International Humanitarian Law and the Joint Agreement on Safety and Immunity Guarantees.

During the resumption of formal talks held on Aug. 22 to Aug. 26 in Oslo, Norway, the GRP panel agreed to recommend to Duterte the issuance of an amnesty proclamation, subject to concurrence of Congress.

The GRP has also agreed for the NDFP to reconstitute its list of Jasig-protected individuals or those who should be given safety and immunity guarantees. The NDFP’s original Jasig list could no longer be opened when diskettes containing passkeys were corrupted following a raid by the Dutch police of its international office in Utrecht in August 2007.

Both parties also agreed to hasten the peace process and set the timeline for the completion of the remaining substantive agenda for the talks. These include: socio-economic reforms; political and constitutional reforms; and end of hostilities and disposition of forces.