Duterte’s Death Squads, and Ours

Some people get bent out of shape if you call them a “son of a whore.” On September 5, just before his first meeting with President Barack Obama, President Rodrigo (“Rody”) Duterte was asked by a reporter how he would respond if Obama asked about extrajudicial killings.

I don’t give a shit about anybody observing my behavior. I am a president of a sovereign state and we have long ceased to be a colony. I do not have any master except the Filipino people, nobody but nobody. You must be respectful. Do not just throw questions. Son of a whore [putang ina], I will swear at you in that forum.

Obama canceled the meeting, which was to have taken place on the sidelines of the summit of the Association of Southeast Asian Nations (ASEAN) in Laos.

Duterte was right to be agitated. Typically, the United States calls attention to the deficiencies in a country’s human rights record as a prelude to invasion.

Duterte cannot plead innocent in the matter of extrajudicial killings. Before he became President at the end of June, Duterte had been mayor of Davao, the Philippines’ third-largest city. During Duterte’s 22 years as mayor one thousand people were killed by the so-called Davao Death Squads. The victims are people suspected of selling or even just using drugs.

Duterte openly supported the death squads while Mayor. As President, Duterte promises more of the same. Human Rights Watch reported that Duterte had “pledged that if he became president of the Philippines he would execute 100,000 more criminals and dump their bodies in Manila Bay,” there to fatten the fish. Since Duterte became president on June 30, there have been 3,000 extrajudicial killings.

Duterte has not helped himself by seeming to adopt Adolf Hitler, perhaps facetiously, as a role model. On Friday, Duterte remarked that Hitler had killed “three million Jews” (sic), and that he, Duterte, would be “happy” to kill “three million drug addicts.”[1]

Does Duterte want to be invaded? He’s given Washington the pretext it needs for a “humanitarian intervention” in the Philippines: Duterte is an aspiring Hitler who has committed genocide against thousands of his own people.

Or Duterte could simply be bumped off. Duterte recently claimed that the CIA is out to kill him. I don’t know if that’s true, but I wouldn’t sell him life insurance.

Whatever his connections with the Davao Death Squads, Duterte is an amateur compared with the United States. The US has been in the death squad business for decades. This does not stop the US from lecturing other countries about human rights, much like an 800 lb. man dispensing diet tips.

Death squads were introduced in Colombia by the Kennedy Administration and have been almost continuously active ever since. Their targets are trade unionists, peasant leaders, and human rights activists. 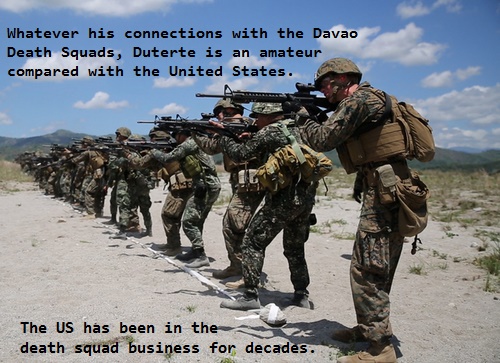 US funding for Colombia pours in not despite, but because, the US is aware of the paramilitaries’ activities. Latin Americanist Lars Schoultz has demonstrated a positive correlation between human rights abuses and US funding. As human rights violations increase, so does US aid (so long as recipients are pro-capitalist and pro-US, of course).

Safeguarding US corporate interests is a partial explanation for the US collaboration with Colombia. Another US goal is preserving Colombian elites’ monopoly over the country’s drug trade against rivals like FARC. Ignore Plan Colombia. The idea that the US and Colombia are waging a war on drugs is a bad joke.

In the “early 1980s … the CIA funded, armed, and trained Honduran government death squads that murdered hundreds of opposition activists.”[7] This was in addition to the Reagan Administration’s use of Honduras as a staging base for the Nicaraguan contras against Nicaragua’s popularly elected Marxist Sandinista government.

Death squads are once again active in Honduras following the coup d’état that toppled democratically-elected President Manuel Zelaya. Zelaya’s land reforms had made Zelaya unpopular with Honduran elites and international corporations. Zelaya had also made himself unpopular with the United States. Zelaya had led the effort to have Cuba readmitted to the Organization of American States (OAS).[8] Zelaya, not unlike Rodrigo Duterte, did not know his place in the US imperial scheme. Zelaya had to go.

Without requesting a wake-up call, Zelaya was yanked out of bed on the night of June 28, 2009, and thrust, still in his PJ’s, on a flight to Costa Rica. The plane stopped on the way to refuel at the US Soto Cano Air Base in Honduras. There is no evidence that the US instigated the coup against Zelaya. (Zelaya maintains that the US was involved.)[9] However, the US certainly smiled upon the coup. Otherwise, the flight carrying Zelaya into exile could not have refueled at an American air base.

Hillary Clinton, Secretary of State at the time of the Honduran coup, could have exerted pressure to have Zelaya restored to the presidency. Instead, Clinton pushed for new elections. The new elections gave the coup government an undeserved patina of legitimacy. Clinton boasted of this diplomatic “success” in the original, hardcover edition of her 2014 memoir, Hard Choices. Strangely, by the time the book appeared in paperback the following year the section on the Honduran coup had disappeared—not unlike more than three hundred Hondurans murdered since the coup.[10] Was tearing out these pages another of Hillary’s “hard choices”?

A word about the Honduran death squads’ best known victim: Berta Cáceres, an internationally acclaimed activist for women, the environment, and indigenous peoples, was murdered on March 3 of this year. A former Honduran military policeman told the Guardian that he had seen Berta Cáceres’ name on an army hit list.[11] This soldier was a member of one of two elite special forces units—death squads—ordered to kill Cáceres and dozens of other environmental and social activists. The two units had received training in 2015 from 300 US Marines and FBI agents.

Overwhelmed by the Iraqi insurgency which followed the 2003 American invasion, the US turned to the “Salvador option,” i.e., death squads. General David Petraeus, commander of coalition forces in Iraq, organized ex-Baathist goons into death squads with the help of a retired colonel, James Steele.[12] During the 1980s, Colonel Steele had trained paramilitaries in El Salvador. Steele had also run guns and supplies to the Nicaraguan Contras in league with Colonel Oliver North.[13]

From Washington’s perspective, death squads are a priceless tool because they obviate the political fallout from sending combat troops overseas. No tiresome explaining to Congress. No body bags coming home. And Washington gets to appear far more peaceable than it is. In her Trump campaign book, Ann Coulter lauds Ronald Reagan for “deploy[ing] the military only three times during his eight years in office.”[14] Reagan’s engagements in Lebanon, Grenada, and Libya “result[ed] in fewer than three hundred troop deaths.”[15] Coulter can recast Reagan as a peacenik only because she ignores Reagan’s funding, supplying, and training of death squads in Central America and the mujahideen in Afghanistan. There were many more than three hundred bodies under Reagan, but those deaths don’t count because they weren’t Americans.

There are more examples of US-backed death squads than can be related here. I have said nothing about the President’s personal death squad, the Joint Special Operations Command (JSOC).[16] I have said nothing about US involvement with death squads in Angola, Bolivia, pre-Castro Cuba, the Dominican Republic, East Timor, Guatemala, Thailand, Uruguay—and the list goes on. Here are only a few last examples taken at random.

From 1965 to 1966, in what has been described as one of the worst massacres of the Twentieth Century, Indonesian death squads slaughtered thousands of Communists whose names had been supplied by the CIA.

From 1990-94, the CIA funded the Haitian hit squad FRAPH. FRAPH’s trademark was “necklacing,” i.e., dropping tires around their victims, supporters of exiled President Jean-Bertrand Aristide, and setting the tires on fire. For years, FRAPH’s leader, Emmanuel Constant, lived free and unmolested in New York City, selling real estate. Constant is currently serving time in a maximum security prison in New York — not for a peccadillo like mass murder, but for committing mortgage fraud during his real estate career.

Throughout West Africa, the CIA and US Special Forces are providing training and support for death squads in Nigeria, Niger, Mauritania, and Mali.[17] Their mission is eliminating Boko Haram, but militants won’t be the only victims. Death squads are not finicky about collateral damage among noncombatants (not like US drones are).

Duterte’s real crime is not extrajudicial killings; it’s dissing the US Empire. Go along with US dictates and you can kill, torture, rape, rig elections, and crush dissent to your heart’s content. The US won’t say a word as you drive indigenous peoples from their land and allow international corporations to carry off natural resources belonging to the people. Is it any wonder that Duterte’s attitude is: Who the hell are you to question me about human rights, Obama?

The Philippines’ history with the US is, to put it mildly, not a happy one. After seizing the islands during the Spanish-American War, US troops burned Filipino villages, killed civilians, killed prisoners, and used torture, including the “water cure.” An early form of waterboarding, the water cure was administered by pouring water down a prisoner’s nose and throat, bringing him to the brink of drowning and causing the victim to “swell up like a toad,” as US soldiers described it. Setting aside World War Two, when the Philippines was occupied by Japanese, rather than American, imperialists, the US occupation of the Philippines did not end until 1946.

Duterte resurrected the colonial past on September 8. Addressing the assembled ASEAN leaders, including President Obama, Duterte denounced US killings in the Philippines and showed photographs of Filipinos Americans had killed a century ago.

Duterte is on his way to reversing the pro-US policies of the past. Under a 2014 agreement, one hundred US Special Forces are in the Philippines fighting the Islamic separatist group Abu Sayyaf. Duterte wants the US troops gone.

We should support Duterte’s resistance to US imperialism. We must resist any attempt by the US to intervene militarily in the Philippines. We should be alert to the possibility of covert ops aimed at toppling or killing Duterte. Duterte must not become another Manuel Zelaya.

What the left must not do is whitewash Duterte’s human rights offenses. CounterPunch readers were recently warned about sections of the left who are willing to give a pass to anyone who calls himself an anti-imperialist. We must avoid that. We can oppose imperialism while standing for human rights. Indeed, we can do nothing less.

[8] The author thanks Dan Beeton, Director, International Communications, Center for Economic and Policy Research for invaluable insights on Honduras. All opinions expressed and any errors in this article are the author’s responsibility alone.

[15] Two hundred forty-one of these deaths occurred when the US Marine barracks in Beirut was bombed in a suicide attack on October 23, 1983.

Charles Pierson is a lawyer and a member of the Pittsburgh Anti-Drone Warfare Coalition. E-mail him at Chapierson@yahoo.com.