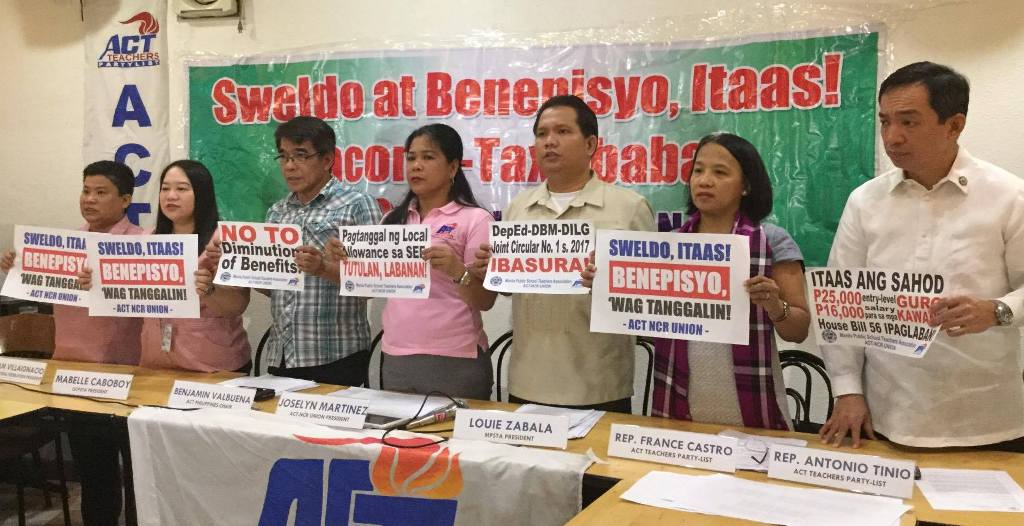 “This is a slap in our faces. We are asking for a salary increase and what we get is this.”

The Alliance of Concerned Teachers (ACT) are calling to scrap Joint Circular No. 1 series of 2017, which removes teachers’ allowances from the SEF, ranging from P1,000 to P3,000 ($20 to $60). Under the new circular, the SEF will only cover the compensation of locally-hired elementary and secondary schools teachers. This affects nationally-hired teachers, or those hired by the Department of Education (DepEd).

The joint circular was issued in January by the DepEd, the Department of Interior and Local Government (DILG), and Department of Budget and Management (DBM). It revised the 1998 joint circular by the same agencies, which provides guidelines on SEF’s priority expenses, including allowances of teachers granted by local government units.

“This is a slap in our faces. We are asking for a salary increase and what we get is this,” said ACT president Benjamin Valbuena, in press conference on Wednesday, Feb. 1.

Valbuena noted that the Salary Standardization Law 4 (SSL), which was implemented last year, only gave measly increases to rank-and-file government employees, including teachers, who are already reeling from the continuing rise in the cost of living.

The SEF was created under Republic Act No. 5447, which stated the sources of funds to be used exclusively for DepEd. The law also stated that the SEF should be used for the payment and adjustment of public school teachers’ salaries, as well as their benefits under the Magna Carta of Public School Teachers.

The previous circular stated priority expenses to be charged to the SEF, including the operation and maintenance of public schools and payment of existing allowances of teachers granted by the LGUs. It also covered the allowance for teachers, whether “locally hired” – meaning, hired by the local government – or by the DepEd.

DepEd says LGUs can give allowance

Meanwhile, DepEd released a statement saying that the new circular “does not prohibit LGUs from providing teachers allowance.”

The DepEd said the new circular is only to update the guidelines and policies on the use and purpose of the SEF. It added that Section 4 of the revised circular enumerates expenditure items that can be charged to the SEF.

“Although payment of allowances of nationally-hired teachers is not included, LGUs are not prohibited from granting such. These additional allowances may be sourced from the LGUs’ regular budget or General Fund, subject to existing budgeting rules and regulations,” DepEd said in a statement.

Louie Zabala, president of the Manila Public School Teachers Association said they are anxious that public school teachers might not even receive their allowance even if the local government has allocated a budget for it this year.

He added that due to lack of preparation for the implementation of the K to 12 program, the SEF was mostly used for purchasing land and construction of facilities.

Mabelle Caboboy, president of the Quezon City Public School Teachers Association said that teachers are forced to spend their own money for reproducing modules and instructional materials used for their teaching. “This removal of our allowance will greatly affect us,” she said.

She added that their call for an increase in the budget for education would address this perennial problem of education in the country.

Joselyn Martinez, president of ACT Union-National Capital Region said they would seek a dialogue with the DBM on Feb. 3 regarding the new circular. Also on the same day, teachers will reiterate their call for the salary increase and lowering of income tax.

The group has been pushing for an entry-level of P25,000 ($501) salary for teachers and P16,000 ($321) for non-teaching personnel.
“What we want is a substantial salary increase and not the removal of our allowances,” said Martinez.

Valbuena stressed that the benefits being received by public teachers today are the fruit of their steadfast struggle for rights and welfare. “That is why we are not allowing this. This circular should be scrapped,” he said.