Fisherfolk want their fishing grounds back 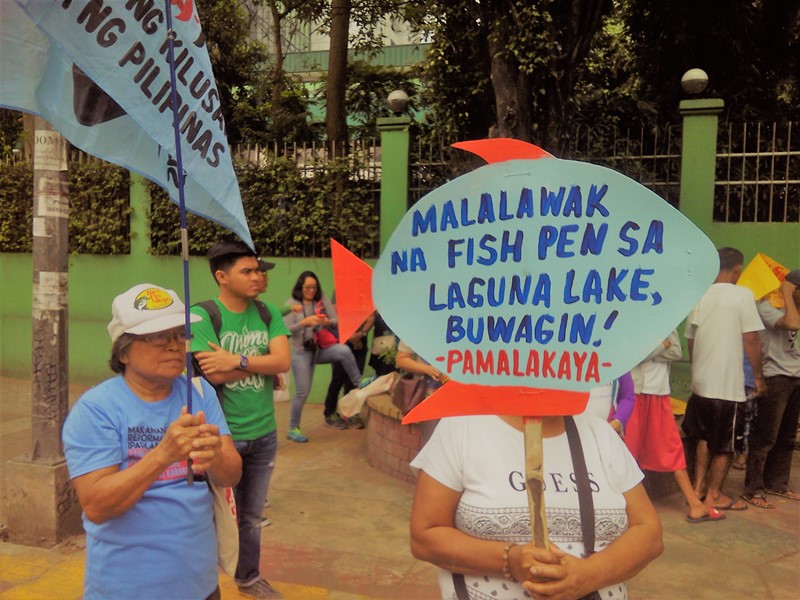 MANILA – Although the government has stopped issuing permits to large fish pen owners in Laguna Lake last month, up to now the lake is still dominated by wide fish pens. This prompted the fisherfolk group Pambansang Lakas ng Kilusang Mamamalakaya ng Pilipinas (PAMALAKAYA-Pilipinas) and Save Laguna Lake Movement (SLLM) to hold a picket protest in front of the Laguna Lake Development Authority (LLDA) and the Department of Environment and Natural Resources (DENR) last Monday February 13. They demanded the immediate and unconditional dismantling of wide fish pens in Laguna de Bay.

They said that by now the vast tracts of fish pens in the 900-plus sq. km. Laguna Lake should have been illegal.
The continued operation of wide fish pens owned by corporations and individuals with bigger capital (than ordinary, small fisherfolk) has turned more than half of the lake into a no-fish zone for small fishers in the area. The fish pens have reportedly deprived them of what used to be their common fishing grounds for years now.

Pamalakaya disputed the “conservative data” of the LLDA that said there are just 130 sq. kms. of private fish pens in (the 911 to 949 sq. kms.) Laguna de Bay. In Pamalakaya’s study which they conducted with SLLM, they found out that 60 percent (or nearly 5,000 sq. kms) of Laguna de Bay is currently occupied by private fish pens. 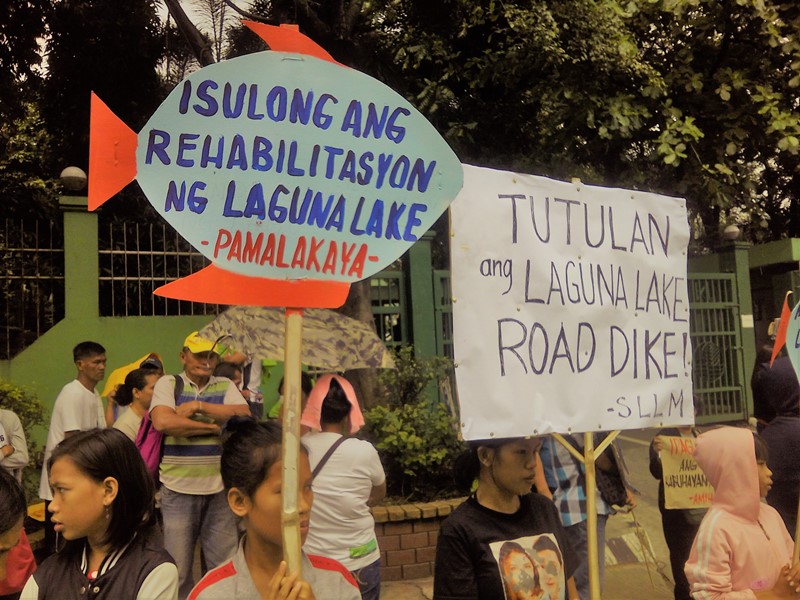 The protesters welcomed the government’s anti-fish pen campaign, but urged the government to do it immediately and quickly for the sake of small fishers who are eagerly awaiting the reopening of the bay for common use and fishing zone.

Aside from giving livelihood to thousands of small fishers, the anti-fish pen campaign is also expected to help rehabilitate the lake.

Fernando Hicap, Pamalakaya chairperson, said in a statement that the wide fish pens dominating the lake now contribute to the lake’s pollution with their chemical-based feeds for their cultured fish.

He called on the government to strictly enforce its anti-fish pen campaign targeting large corporations and investing individuals who own more than what is the designated or allowed size through their use of dummies. Hicap reminded the government that only a tenth of the Laguna de Bay can accommodate aquaculture, yet, the government’s own conservative data said the bay has more than that area covered with wide fish pens.

Pamalakaya and SLLM said the anti-fish pen campaign should lead to genuine rehabilitation of the lake and not to turning the lake from a productive fishing zone to a money-making business hub of just a few developers.

The vast tracts of fish pens should not be replaced by another privatization scheme like the supposed “eco-tourism hub,” said Hicap.

He said the Laguna Lake is for the small fishers and its residents, and not for any huge private entity seeking to monopolize the lake. “A genuine rehabilitation of the lake means restricting factories and industries to dump its chemical wastes into the lake and reopening the Napindan Channel which barred the entry of salt water into the lake, depriving it of its natural and ecological balance.”