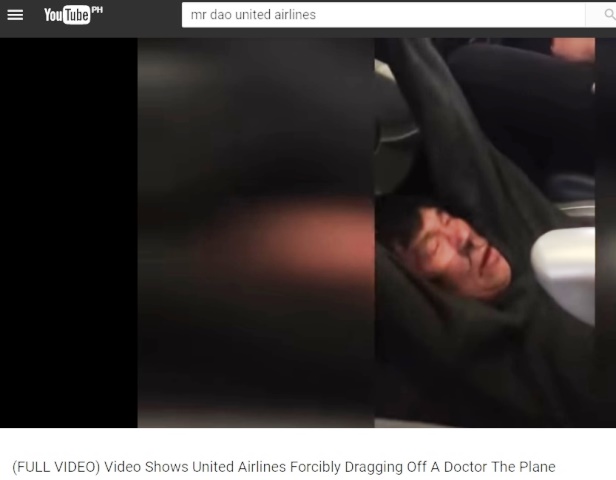 While the videos of security cops dragging a bloodied physician down the aisle of a United Airlines plane clearly shocked the millions of people who viewed them, my guess is that, at some level, it didn’t surprise them. Indeed, the reason the videos were so damaging to United—and at some level, to the entire airline industry—is that everyone who’s flown in coach during the past several decades knows that the welfare of airline passengers, save for those who fly first- or business-class, is the least of the airlines’ concerns.

The systemic abuse of those who fly coach has become the sine qua non of the airlines’ business model, as the incessant shrinkage of the seats and legroom afforded passengers clearly attests. “The roomiest economy seats you can book on the nation’s four largest airlines,” according to Consumer Reports’ Bill McGee, “are narrower than the tightest economy seats offered in the 1990s.” Maverick airlines that try to market themselves as more customer-friendly have been compelled to revert to the industry’s dismal norm.

JetBlue did indeed offer coach passengers more space, partly because many of its planes didn’t devote space to a first-class cabin. When Wall Street analysts condemned company management for being “overly brand-conscious and customer-focused,” however, the airline deposed those executives and in came a new team, eager to install first-class accommodations up front even if it meant squeezing the saps in coach.

Passenger squishing continues apace. Last week, Airbus officials announced they’d found a way to reconfigure coach seating in their giant A380 aircraft by seating 11 passengers abreast in economy, instead of the standard ten. That creates more room, of course, for those first-class passengers for whom no amenity is too luxurious and no fare too high. For a tidy $32,840, Emirates Airlines will whisk you from Los Angeles to Dubai in a private compartment complete with a seat that unfolds flat with a mattress, your own bathroom with a shower, and a flat-screen TV and minibar. Lufthansa has built a separate terminal in Frankfurt (home of Germany’s financial industry) for its first-class passengers, and even apportions air quality by fare class. In first-class, Lufthansa has installed humidifiers that raise the humidity to 25 percent, while in coach, it’s kept to a Death Valley-level of 5 to 10 percent.

There are really only two classes of air travel: peerage and steerage. Long-distance travel has reverted to the model that prevailed before World War II, with luxury for a few and you’re-lucky-to-be-here-at-all-so-don’t-mouth-off accommodations for everyone else (see Titanic for a quick refresher course). The decent level of comfort and service afforded to all passengers in the three decades after the introduction of commercial jets in the late 1950s looks to have been a byproduct of the mass middle class that emerged in Western nations during the broadly shared prosperity of the postwar boom. Since then, the economies of Western countries have become increasingly bipolar, and so, too, so have the airline industry’s attitudes toward customer service and seating.

The airlines have not just accepted this bipolarity, however; they’ve exacerbated it. For one thing, they’ve greatly increased their profit margins, and greatly reduced their need to deliver adequate service by eliminating competition and customer options through a steady stream of mergers. In 2005, as Justin Elliott recounted for ProPublica, there were nine major airlines; today, there are just four. (That’s a major reason why boycotting United Airlines is a lot easier said than done.) The weakness of antitrust enforcement in Democratic as well as Republican administrations is one big reason why most Americans don’t look forward to air travel.

Secondly, like most American corporations, the airlines have been restructured to reward investors at the expense of everything and everyone else. Don’t take my word for it: take Rick Schifter’s. The longtime managing partner of the TPG private equity firm and a member of American Airlines’ board, Schifter had the questionable judgment to author a Wall Street Journal op-ed two years ago in which he boasted that private equity was a key player, if not the key player, in turning around what he termed “the industry’s performance.” The key innovations, he continued, besides simply benefiting from lower fuel costs, were “new revenue streams such as luggage fees [and] the consolidation or liquidation of some airlines.”

Anyone who doubts there’s a direct line running from private equity’s redefinition of the airlines’ mission to Dr. Dao being dragged like a sack of potatoes down an aircraft’s center aisle might want to check out Schifter’s list of improved airline practices:

It is no coincidence that the CEOs of the three largest airlines today rose to prominence while their companies were controlled by private-equity firms. Following airline deregulation in 1978, many airline executives were motivated by growth over profits—and were reluctant to shed the inefficiencies that were vestiges of a regulated industry. Only after this mind-set changed, when success was measured by net income and not the number of planes, did the industry bring supply into balance with demand.

Oh, those inefficiencies—hot meals, legroom, not paying for luggage: what were those troglodytes thinking? Probably not share buybacks, like the $2 billion in buybacks the United board authorized last summer at the same time it announced it would cut back its planned growth over the next year from 2 percent to 1.5 percent. Or the $9 billion in share buybacks that American Airlines undertook between 2014 and 2016.

That’s the improved industry performance that Schifter is talking about. And if there are higher profits to be gained by reducing complementary food service to bread and water, and the entire flight experience to a form of mobile incarceration, well, where exactly can those prisoners—excuse me, passengers—go for better service? Pan Am? TWA? North by Northwest? What options do today’s travelers have?

They’re not likely to be bopped on the head and lugged down the aisle, but neither are they likely to be treated as if they had some better way to fly.