Marya Salamat May 1, 2018 contractualization of labor, may 1, Tambisan sa Sining 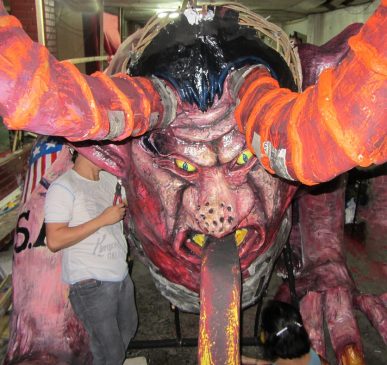 MANILA — President Duterte will be ‘joining’ this year’s major May 1 Labor Day activity with the workers — as an effigy of a devil. 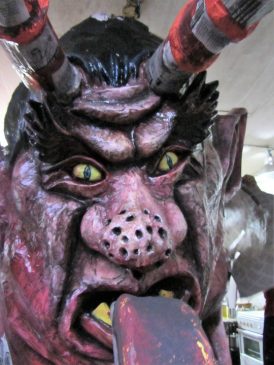 “Du30monyo” bears the image of the President, “a demonic overlord” complete with a pair of horns, a devil’s tail, a two-forked tongue, and an iron hand. The Kilusang mayo Uno (KMU) says it symbolizes the tyranny of Duterte’sregime.The effigy is 8-feet tall, 14-ft wide. It was designed and executed by Tambisan sa Sining. 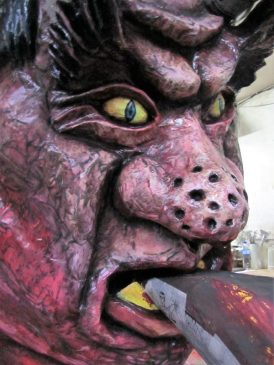 The ‘evil’ president rolls out among workers from diverse labor groups who march to Mendiola today together for the first time in a long time.

Crafted for more than four weeks, Du30monyo is cardboard and papier mache outside, and inside a hollow structure of bamboo, rattan and GI wire. Before May1 is over, the huge Du30monyo will burn. 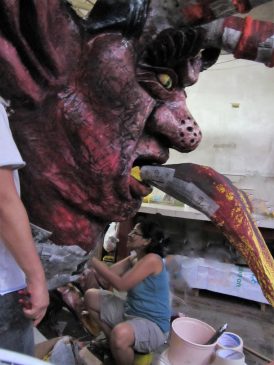 The same image of Du30monyo ‘graces’ the 8-feet by 22-feet mural that is the May 1 program backdrop. This time, Du30monyo is flanked by his alleged death squads and the government troops that serve as defense forces of anti-people investment projects. Du30monyo and his minions are pushed to the left of the canvas by the united figures of a worker and a peasant. Pushed to the right of the canvas by the worker-peasant alliance is a depiction of the military with landlords and capitalists. 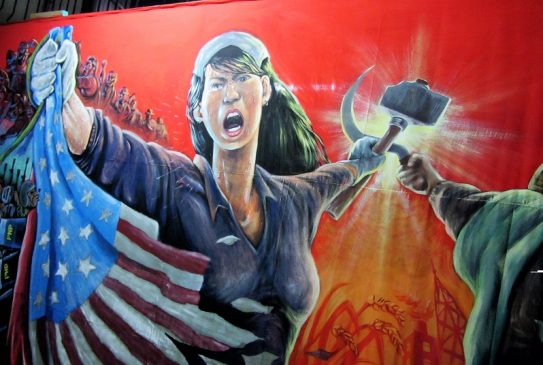 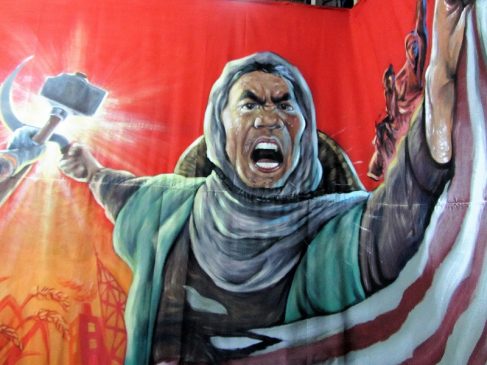 The KMU said this arrangement reflects how the people will overcome the fascist, tyrannical tactics of the Duterte regime. That is, through the collective action of the labor sector in unity with the rest of the Filipino people.

Among the workers joining the march to Mendiola today, watch out for some who congregate to form the text “MARX 200”. They are celebrating Karl Marx’s birthday this coming May 5. Karl Marx authored Das Kapital and provided the first major input into the revolutionary theory and practice of workers’ movements, liberation and proletarian revolution worldwide. 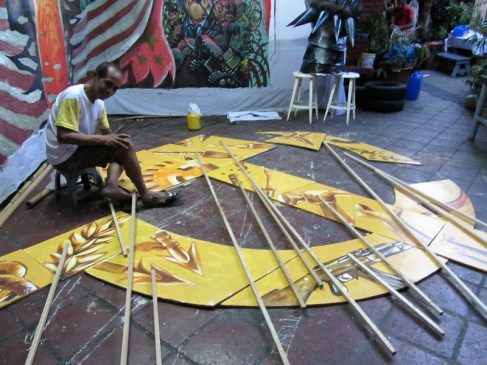 Several workers each carrying panels will form the international symbol of laborers, a golden hammer, and sickle. Each panel features images of workers and peasants fighting for national industrialization and agrarian reform.

The marchers forming the icons together span approximately 15 meters by 10 meters.

The Filipino Labor Day celebration has historically been close to art. The first labor federations and labor leaders were actively into theater arts, visual arts, music and literature, from newspaperman Isabelo Delos Reyes, president of Union Obrero Democratica to poet Amado V. Hernandez, to theater artists Felixberto Olalia and Felicing Villados, and now organizers and members who also make music, paint, and write. Street rallies, especially from the days of anti-Marcos activities to present, have also featured a protest art gallery out on a march.