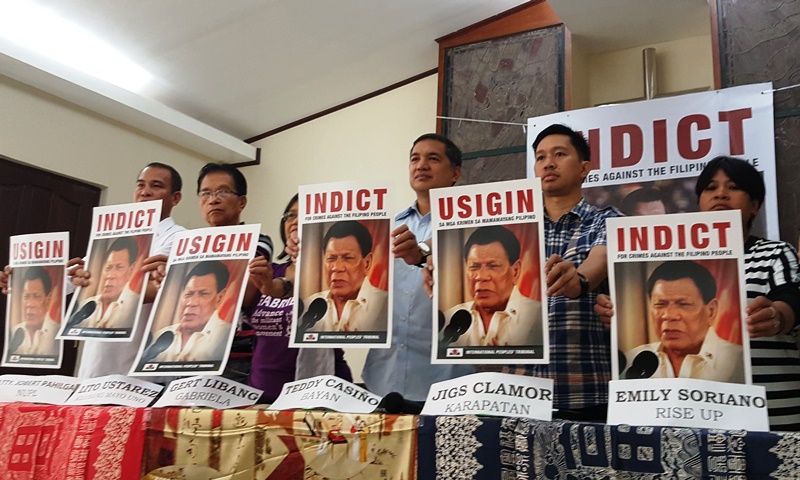 MANILA – For that day of reckoning like what happened to the just-convicted retired Army major Gen. Jovito Palparan Jr., various people’s organizations led by Bagong Alyansang Makabayan (Bayan) and Karapatan announced at a press conference this Monday, September 17, that they would testify in an International People’s Tribunal in Brussels, Belgium against Philippine President Rodrigo Duterte.

The International Peoples’ Tribunal (IPT2018) will be held on September 18 to 19. Filipino victims of rights violations will testify to indict Presidents Rodrigo Duterte and Donald Trump “for crimes against the people.”

“An impartial tribunal, recognized internationally, could serve as moral suasion to stop the attacks and make the regime accountable for its crimes,” Clamor said.

At the press briefing, they reiterated that the global court derives its legitimacy from the people as the primordial source of authority and power of all courts – international or local. Composed of leading public figures of recognized achievements and high moral stature, they are expected to come up with a verdict based on a thorough and fair assessment of evidence, and in line with applicable legal standards.

The 21 cases the Filipinos filed before the IPT2018 reflect the ‘attacks of the Duterte government on the Filipino people,’ under his administration’s so-called war on drugs, counter-insurgency war, and war against ‘terrorists’ that in practice has become a war against national minorities and other vocal critics of the administration.

Bagong Alyansang Makabayan Teddy Casiño clarified that progressive Filipino people’s organizations are sending representatives to the IPT2018 to give testimonies even as they are still striving to seek justice and accountability through other avenues and in the local courts. Unfortunately, Casiño said, the judicial system itself is under attack in the Philippines.

Worse, according to Clamor, the judicial system in the Philippines is “beholden to vested interests of the US and local ruling warlords.” He said the continuing impunity of killings, state violence and violations of people’s rights attest to this. The extreme weaknesses of the local justice system in punishing rights violators have been driving various organizations to venues local and international that are open to documenting and broadcasting the said cases of rights violations.

In the past, international tribunals have indicted abusive regimes in the Philippines, as listed below:

The Philippine government under President Duterte has been vocal against international bodies or courts probing into his human rights record. He has ordered the Philippine government’s pullout from the International Criminal Court. He has time and again publicly taunted Dr. Agnès S. Callamard, Special Rapporteur on extrajudicial, summary or arbitrary executions at the Office of the United Nations High Commissioner for Human Rights, for attempting to probe his regime’s human rights record.

As such, Casiño is not optimistic about President Duterte’s reaction to the Filipinos’ testimonies in the global court, especially since he and the rest of the representatives of the progressive organizations believe their airtight cases will likely prompt the IPT to indict Duterte. But they hope the “moral suasion” arising from the public documentation of Duterte’s crimes will help put a stop to the attacks and make his regime accountable for its crimes.

The findings and verdict of the IPT2018 will be submitted to the International Criminal Court (ICC), the European Parliament and the United Nations Human Rights Council on September 21 this year, coinciding with the anniversary of Martial Law in the Philippines.

“Although Duterte already withdrew from the Rome Statute creating the ICC, it will take a year upon the receipt of the notice of withdrawal according to Article 127 of the ICC. This rule was made specifically for dictators like Duterte who might withdraw while complaints are filed against them,” said Jerome Succor Aba, chairperson of Suara Bangsamoro who was prevented by authorities to fly to Belgium to testify.

Documenting attacks on the people to stop such attacks, call for justice

The broad categories on rights violations tackled in the Filipino groups’ testimonies include (1) civil and political rights, (2) economic, social and cultural rights, (ESCR) and (3) national sovereignty, development, and international humanitarian law. The cases filed in IPT represent what Karapatan’s Jigs Clamor described as “full-scale attacks of the Duterte government on the Filipino people.”

These include the mass murder of allegedly more than 23,000 poor Filipinos under Duterte’s war on drugs; and more than 160 extra-judicial killings of mostly peasant and indigenous leaders.

At present, Martial Law is in effect over Mindanao. Its proclamation has been questioned at the Supreme Court and in Congress for utter lack of basis, and its extension also for lack of basis. Petitioners against Martial Law cited how Duterte himself had announced that the Marawi siege, his justification for imposing Martial Law in the first place, was already over. Yet, as the 2018 deadline of the reextended Martial Law draws near, there are talks that Duterte might try to extend and expand Martial Law.

In just one year of Martial Law in Mindanao, Karapatan has documented at least 49 victims of extrajudicial killings, 22 documented cases of torture, 89 victims of illegal arrest and detention, and 336,124 victims of indiscriminate gunfire and aerial bombings.

Instead of putting a stop to killings, more of it has been happening, victimizing youth and civilian Moros and indigenous people, said Jerome Aladdin Succor Aba of Suara Bangsamoro. He cited the recent massacre of Tausug Moro youth in Patikul. These youth had notified the military in the area of their plan to harvest fruits in the mountain. But some Scout Rangers chanced upon them and brought them to a police detachment, Aba said. “The Scout Rangers took in the youths alive at noon on September 14. By late afternoon they returned these youths dead.”

The military said the killed youth were members of the Abu Sayyaf, but the communities from where they came vehemently denied it. Aba said the irony of this Martial Law and continuing killings in Mindanao is that it will breed further conflicts and war, instead of peace. “You kill civilians and youths who are just harvesting fruits, and you’d end up with a very very furious people,” he said.

The solution should have been attending to the people’s land problems, poverty, but the Duterte government is waging more wars, buying more arms, imposing greater taxes, Aba said.

Aba himself should have been part of the Filipino delegates to the IPT2018, but he was denied at immigration. Earlier this year, he had been denied entry to the United States, held for hours and interrogated by US Homeland Security allegedly for his alleged links to “terrorists.” As chairperson of Suara Bangsamoro, Aba was slated to testify on the charges regarding religious discrimination, arbitrary detention and torture committed against him by agents of US Department of Homeland Security (DHS) and US Customs and Border Patrol (CBP) on April 17-19, 2018.

For the Moro, Sultan Hamidullah Atar of Marawi City will testify in the International Peoples’ Tribunal (IPT2018) to prosecute President Rodrigo Duterte for his crimes against the Moro and the Filipino people.

Trumped-up charges against leaders, activists and critics, including that of Senator and former justice secretary Leila de Lima, media repression, the drive to deport Sr. Patricia Fox and other foreign missionaries who have been joining fact-finding missions into shell-shocked communities, and the detention of more than 500 political prisoners, are also included in the charges to be heard in IPT2018.

KMU leader Lito Ustarez said they are sending representatives of strikers from NutriAsia, unionists from Sumifru in Mindanao, jeepney drivers, and operators’ groups, to present cases of ESCR violations. These include labor-only contracting, union-busting, landlessness, harassment of poor peasants and agricultural workers, corporatization of public transportation, among others. Ustarez said some KMU affiliates in Mindanao are being harassed by the military and considered as enemies of the state just for unionizing. Recently, some unionists managed to survive an ambush attempt, he said.

The groups under Bayan also filed cases against violations of international humanitarian law and the people’s right to national self-determination. They bring documentation on the attacks on 226 indigenous peoples’ schools in Mindanao by the AFP, PNP and the DepEd, bombings, and airstrikes of indigenous communities in Malibcong, Abra in March 2017, and the massacre of seven personnel of the National Democratic Front in August this year. They also bring cases against the intervention of the US military and government in the Philippines.

Asked why they did not just bring the cases direct to ICC, Jigs Clamor explained that they will, in fact, bring cases to the ICC. But he said the IPT will also be a huge help in spreading consciousness about the impunity in the Philippines.

The groups expressed their faith in the IPT 2018 jurors who form an international panel of eminent individuals from different disciplines, with proven competence, integrity, probity and objectivity.