Salt of the Earth: The plight of Laiya peasants

This was a place where the people once enjoyed abundant catch and could fish anywhere they pleased. Here, the shores sheltered three generations of families that would shoot the breeze over fish sale in their beachside cottages and had cleared the uplands of trees to farm crops for additional income. Here, where land and sea were part of the commons, communal systems of resource access are menaced by other groups’ claims to ownership.

SAN JUAN, Batangas — While the residents were out at sea or away on some errand, the men arrived unannounced, bearing crowbars, sledgehammers, and chainsaws.

Some saw them aboard eight tourist buses that barreled down the road and stopped within five meters of the town’s security checkpoint. There, in the morning of July 23, a 450-strong demolition crew, bout 50 armed security guards, and 30 elements of the Philippine Army’s 1st Infantry Battalion got off and went on to tear down hovels and camps along the national road in barangay Laiya, San Juan, Batangas.

That two security guards died later on during the demolition was the only detail the evening news report found so disturbing. That 34 individuals were accused of murder despite no compelling evidence, while seven residents sustained injuries and more than 300 peasant families were yet again about to be illegally dislodged, seemed like a footnote to the narrative.

A drone footage of the wipeout could indeed easily frame what went down as a melee, a clash between law enforcers and desperate, enraged “squatters.”

Yet, what often gets left out of the frame are images of farmer and fisherfolk households forcibly evicted from their homes, divested of livelihood, security, and property. What never make the headlines are these stories of poor families excluded from their own community due to land grabs, which remain doubly driven by private property and wanton state complicity.

The confluence of business and bureaucracy could not be more apparent in the tourist town of Laiya, known as the Boracay of Batangas for its crystal-clear waters and white-sand beaches which the local government primes for estate development. The residents, however, had prided on their seascapes long before the commercial resorts and big businesses swooped in. 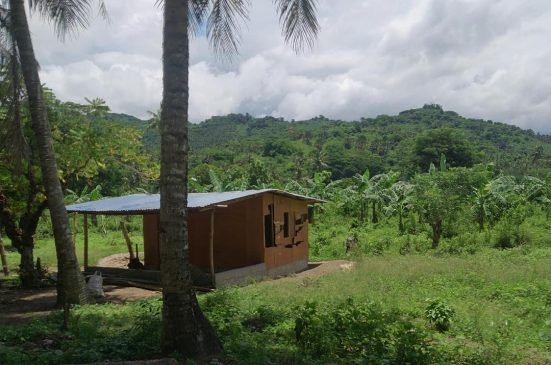 This was a place where the people once enjoyed abundant catch and could fish anywhere they pleased. Here, the shores sheltered three generations of families that would shoot the breeze over fish sale in their beachside cottages and had cleared the uplands of trees to farm crops for additional income. Here, where land and sea were part of the commons, communal systems of resource access are menaced by other groups’ claims to ownership.

Born and reared in Sitio Balacbacan in Laiya, Rosie* could remember the dispute dating only as far back as the ‘90s. Over the decades, following a history of contested rights claims, bank foreclosures, unpaid amortization, and unacknowledged collective Certificates of Land Ownership Award (CLOAs), the real estate firms Laiya Development Corporation (LDC) and Macaria Development Corporation (MDC) have alleged the residents were unlawful detainers.

“They told us they own the land, and we were but squatters (illegal settlers),” said Rosie in Filipino, who recalled how the protracted court battle came to a head when the municipal and regional trial courts issued a writ of demolition in September 2013.

The court dismissed the residents’ petition for a temporary restraining order. All they could do, then, on July 3, 2014, was to link arms to try to form a human barricade against more than 20 truckloads of police-escorted demolition workers, who nonetheless pushed through.

“We could not fight back because there were many goons and some of them had armalite,” Rosie recounted, crying. “They turned our table upside down while the children were still eating.”

She would find her son David* shaking in fear at the mere mention of cops, weeks after the demolition. Together with their parents, many children witnessed how large swaths of houses could be ripped down in a heartbeat, between the barked orders of the demolition commanders and the crash of concrete falling into dust. 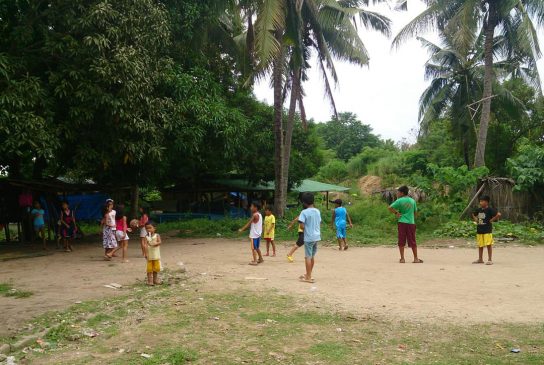 They watched their homes razed to rubble. They could not afford to stand helpless again, four years later, as busloads of demolishers advanced on the low-slung makeshift houses they had erected and relocated to along the national road, having nowhere else to go.

And so, on July 23, 201, just before noon, in a last-ditch effort to stop the ongoing clearing operations, Rosie and her four other neighbors went to a resort close by and sought their local village chief Wivin Llana, who suggested they just cooperate and evacuate for safety.

Unknown to them, then, two security guards were rushed from the demolition site and declared dead within minutes of arrival at the hospital. Based on a drone footage, they must have had sustained wounds from the rocks thrown by the demolition team at the protesting residents from high up on the military camp, where the crew had stayed to rest and regroup.

That Rosie would later receive a summons as one of the 34 respondents to two counts of murder would be just as puzzling to her as the charge that the land they have lived in and cultivated for decades is not theirs after all.

Blood in the water

In their sworn counter-affidavits, the 34 individuals who face murder charges plead innocence.

Like Rosie, Joey* was nowhere near the demolition area and had just hauled in his catch that noon the two security guards were allegedly murdered. Jason* was several miles away, too, doing construction work in a subdivision outside of Balacbacan. Manuel* had yet to collect bets, then, for the small town lottery he was managing when commotion broke out on the road. He ran home at once and had perhaps crossed paths with Ann*, who could only think of fetching her four kids, then, and carrying whatever stuff she could spare from the demolition.

All four of them and the 30 other respondents believe that, if anyone is to answer for the murders, it should be no less than the millionaire mogul Federico “Butch” Campos III whose hired goons were left to do his bidding to pave the way for the expansion of his beachfront estate.

Campos owns the companies LDC and MDC, which claimed over 25 hectares of land from 600 peasant families in Balacbacan. Also registered under his name is the Virgin Beach Resort located nearby, which fisherfolk steer clear of for fear of the tycoon’s hired goons. 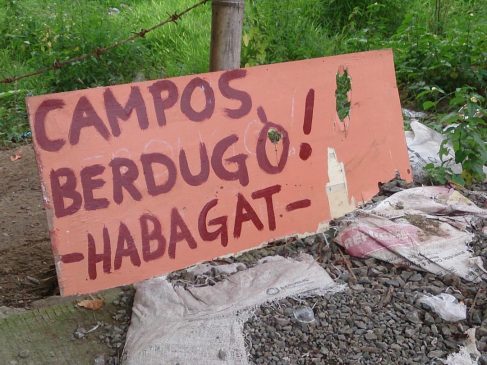 Often, the private security guards would signal for the fisherfolk to leave by way of gunshots in the air if the latter so much as docked near the compound. Fish vendors at shore and even tourists who would rent the locals’ small cottages have also been intimidated and harassed.

Where, before their displacement, the fisherfolk could freely practice subsistence fishing, they can no longer do so now, what with Campos fencing off areas of the sea and shore with buoys and barbed wire for his and his guests’ exclusive rights to the use of marine resources.

Many days their catch weighed only one kilo. “How much is one kilo? P120. But how much is the gasoline? P60 per liter. If every day, your catch is that little, you could not live, you could not eat. If we don’t persist, we could not possibly get by,” Rosie lamented.

If there needs to be better testament to tourism’s failure to bring about its supposed economic benefits, the evidence could not be far from Laiya’s beleaguered fishing community, said Danilo Ramos, chairperson of peasant group Kilusang Magbubukid ng Pilipinas. “The Camposes should not claim to own the land and the sea, because farmers, fisherfolk and the local residents have a right to these resources,” he added.

Wealthy businessmen like Campos can sequester land with utter disregard for the livelihood and welfare of existing communities. More than his culpability, however, it is the local government’s inaction that speaks to the collusion between state and capital, especially in the guise of ecotourism that is to be bolstered further by municipal support for investments from enterprising developers.

The tragedy in Laiya is what happens when government-sanctioned profit-driven development thrives off of resource extraction and exploitation by capitalist plunderers at the expense of a more sustainable, pro-poor advancement of local peasant industries.

For one, under the Republic Act No. 8550 or the New Fisheries Code, mostly big companies with enough capital to buy and use large fishing vessels are privileged to harvest from the country’s waters to the detriment of small-scale fishermen. In the case of Laiya, the non-concession of right of way to fisherfolk only compounds their trouble earning a living.

On both counts, neither has the National Housing Authority nor the Department of Environment and Natural Resources addressed the peasants’ concerns. Besides the absence of intervention by these government agencies, tourism firms derive authority and state approval from problematic development policies that facilitate public-private partnerships.

The Comprehensive Land Use Plan (CLUP) of 1998 for San Juan, Batangas declares Laiya as part of a tourism zone. Anakpawis Rep. Ariel Casilao said that CLUP dictates the role of private business, how land will be used.

Land-use conversion manifests in the rise of resorts as tourist hotspots in coastal spaces and even in agricultural lands that are reserved for commercial centers or medium- to high-end residential sites. Casilao said land use conversion is used to legitimize land grabbing.

Development aggression by no means benefits low-income farmers and fisherfolk who, as both consumers and producers, bear the brunt of a regressive tax system and its inflationary impact on the prices of basic commodities. Yet, if anything, the dominance of corporate tourism as enabled by bureaucratic instruments has not deterred the community from renegotiating their agency in resource regulation, but instead pushed the locals to further assert their rights.

Nothing had in fact prepared Campos and his cohorts for the collective will of 600 peasant families to stay on in Laiya the first time they were displaced. What he had not expected when he ordered his men to level their shanties again was their refusal to be vanquished by fear, the resolve of a people long denied justice and besieged by violence.

“Even now, we could not accept that we would just be driven away; we have been here since birth, and our forefathers, too,” Rosie said. Her family resists to be shortchanged by measly relief goods and small relocation sites, and instead insists on an equitable agrarian redistribution of the original parcels they had tilled and developed in their own capacity.

They know to stand their ground. In their defiance is a hope for a future where they need not worry where their homes end and the resorts begin, where no men carrying crowbars, sledgehammers, and chainsaws would kick their doors in or rip their homes down to seize the lands that are after all rightfully theirs.

* All the residents’ names used are not real.