1. Brave New World by Aldous Huxley. Utopian vision of society but eerily familiar to those who are living in the 21st century.

2. Utos ng Hari by Jun Cruz Reyes. Stories of the everyman in the urban, survival as resistance, the common tao and his struggles against alienation.

4. Dissent and Counter-Consciousness by Renato Constantino. Essays on Philippine history, postwar politics, activism, and the importance of upholding nationalism.

5. Against Everything: On Dishonest Times by Mark Greif. Insightful essays on health, media, rap, American politics, the absurdity of the police, and the relevance of Thoreau.

6. Buhay sibilyan : at iba pang kwento ng kabayanihan sa loob at labas ng bayan, 1896-1902 / Ronaldo B Mactal. Stories of survival and resistance by ordinary Filipinos during the revolution against Spanish colonialism and American invasion of the Philippines. Noteworthy to mention is the chapter about the hardships encountered by revolutionaries in exile.

7. A Philosophy of Walking by Frédéric Gros. A good read on the benefits and politics of walking. It includes the reflections of famous walkers like Rimbaud, Kant, and Nietzsche.

8. The Real Thing: Stories and Sketches by Doris Lessing. Vivid portrayals of individuals experiencing pain and surviving life from teenage pregnancy to loss of love.

10. Astrophysics for People in a Hurry by Neil deGrasse Tyson. We can benefit from unlocking the cosmological constant, the cosmic perspective, simplifying the meaning of quarks, pulsars, the hamburger and Saturn

11. Marshall McLuhan: You Know Nothing of My Work! by Douglas Coupland. A biography of McLuhan as a way to understand his complex thinking. 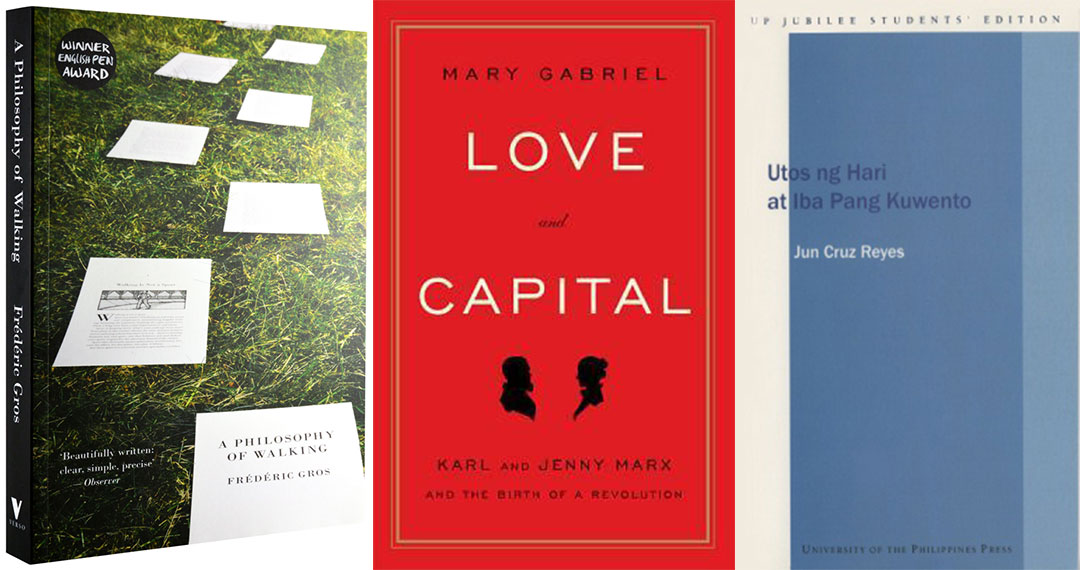 12. Lives of the Poets: A Novella and Six Stories by E.L. Doctorow. Connected stories but each part can stand alone containing enough mystery and reference about modern living.

13. Every Time I Find the Meaning of Life, They Change It: Wisdom of the Great Philosophers on How to Live by Daniel Klein. Useful, witty introduction to the work of some philosophers and how their teachings continue to be relevant.

14. War Dances by Sherman Alexie. Poems and short stories about modern America written from the point of view of a Native American. Sometimes poignant, sometimes funny, but never dull.

15. Radical Technologies: The Design of Everyday Life by Adam Greenfield. Progressive introduction to so-called tech innovations such as blockchains, augmented reality, digital fabrication, and autonomous transport. I appreciate the terms ‘fully automated luxury communism’ and ‘unnecessariat’ discussed in the book.

17. Friendly Fire. Alaa Al Aswany. Laying bare the stuff of modern life in modern Egypt. A writer’s sincere homage to society, a plea for a rethinking of today’s dominant values.

18. A Green History of the World: The Environment & the Collapse of Great Civilizations by Clive Ponting. Author won’t directly say it but this is a brief history of the destructive impact of capitalism.

20. The Wisdom of Crowds by James Surowiecki. Trust the crowds but not really from a vantage point that I am expecting. Case studies cited are useful for sociology students.

21. Democracy by Joan Didion. A political novel about an American family during the post-World War II era up to the end of Vietnam War.

23. Waiting for the Barbarians by J.M. Coetzee. A modern tale about our past in order to understand the present.

24. McLuhan: Hot & Cold: a Critical Symposium with Rebuttal by Marshall McLuhan. Published in the 1960s by scholars dissecting the writings of McLuhan.

25. Armchair Economist: Economics & Everyday Life by Steven E. Landsburg. He is against recycling and other rationalizations of modern economics from a conservative standpoint.

27. Ten Arguments For Deleting Your Social Media Accounts Right Now by Jaron Lanier. I didn’t but as always, his analysis is helpful to understand what Silicon Valley is really doing to our minds and pockets.

28. Generation Robot: A Century of Science Fiction, Fact, and Speculation by Terri Favro. An honest, critical review of our fascination with robots. An early appraisal of AI and how it can impact our lives soon.

29. Speaking of Empire and Resistance: Conversations with Tariq Ali. Frank answers to socially-relevant issues. An overview of Pakistan’s modern politics, US foreign policy, and the Palestine question.

30. Voices of Time: A Life in Stories by Eduardo Galeano. Seeing his world and our world through an empowering, inspiring perspective.

32. Invisible Cities by Italo Calvino. Ah the delight of just sitting on a couch and absorbing the author’s wonderful sketches of real and imaginary cities.

34. Literature And Existentialism by Jean-Paul Sartre. On reading, on writing, for whom, for what end.

35. The Capture of Manila: The Glorious History of August the Thirteenth, 1898 by Lt. Col. I.E.F.YS. Translation by Pacita Fernandez. A very long introduction then a short recap of how revolutionaries captured the towns surrounding Intramuros.

36. Love and Capital: Karl and Jenny Marx and the Birth of a Revolution by Mary Gabriel. Page turner especially after the 1871 events. The sacrifices made by the family for the cause of the working-class, for the revolution.

37. The Beggar Maid: Stories of Flo and Rose by Alice Munro. I hated Flo at the beginning but soon empathized with her character. A novel? A short story collection? Deep, moving, intelligent.

38. Tncs Por Biginers by Ibon Databank Phil. Clear, concise, creative. Yes, some of the humor is outdated but not the sharp analysis. Understand transfer pricing in a very enlightening way.