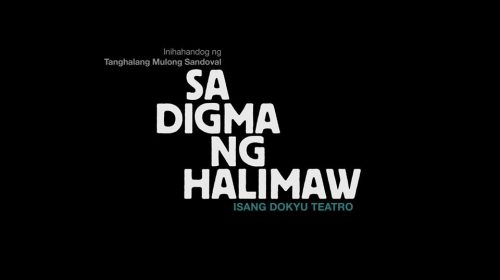 “…contemporary performances seem interested in exploring the range of ways in which ‘reality’ can be produced, explored, and understood. Or, to put it another way, the ways in which ‘make-believe’ is made believable.” (C. Turner and S. Behrnt 2008: 188)

‘Sa Digma ng Halimaw, Isang Dokyu Teatro’ is neither fiction nor ‘make believe’. The documentary theater play was devised from series of interviews and the transcripts were organized and woven into narratives “about the war on drugs, told from the point of view of the families of the victims of said war and others affected by it.”

I saw the play last November 22, 2018 at the Commission of Human Rights in UP Diliman. Reminded myself that my intention was to be present. I knew what I was about to watch were real accounts of incidents, portrayed by actors and later on joined by the tellers (the voices behind the stories/monologues) narrating their stories. I had to, all throughout, been conscious of my reactions, I was aware not to take pity, but to watch with empathy and respect for their courage and strength in telling and re-telling of one of the worst day/night/weeks/months/years of their lives. Unimaginable even, that one would hope never to experience. But I also had no way of controlling my tears.

The power of the material lies in its urgency, and in the rawness and realness of the portrayal of the actors and the tellers. As an actor, I respect the courage of the families of the victims going onstage/ in front of everyone and going through trauma again and again for each performance, hoping for healing and transformation, and justice to be served. In the performances, the lives of their loved ones are handled with so much value and given meaning and their deaths exposed as inhumane and cruel. We, the audience, experienced the everyday struggles to make ends meet, yet at the end of each day, felt the love, hope for life and family. And, in an instant, life is taken away. They just become numbers, a quota to be fulfilled. We become (state) witnesses to a system/government that authorized killings, sanctioned police brutality and leaders publicly declaring no respect for human lives.

We are at war with a system that was created to protect us, work for us, and public servants who have taken their oaths and promised to be of service to the masses, the now and for future generations. But instead, the system has turned monstrous and undeniably evil and greedy, and has abandoned the poorest of the poor of society.

I believe most of them, do not ask for much. An opportunity for a decent life, a good future, a system that encourages them to be better human beings; a piece of land they can farm on their own or a piece of land to build their homes. I believe we are not asking for much, we are asking for what is just and right. Everyone deserves a better life. We demand a government that nurtures its people and not one that kills them.

At the ending, a mother shouts, cries and raises a closed fist, urging us to stand with them and continue seeking, fighting for justice; overthrow the monster in Malacanan! Names of the victims were placed all over the room. We look for them and call out their names, as if even at that moment we know them, we’ve met them and we remember them.

What do you feel after being witness to eight stories knowing that there are more than 20,000 deaths and counting and at least 20,000 more mothers, fathers, children, relatives left with nothing, feeling numb, hopeless and angry? I am confronted, assaulted with the reality that the poor, innocent lives are sacrificed for this so-called ‘war on drugs’, and any glimpse of hope or transformation is killed in an instant. One hopes that everything was just fiction, but truth is, it’s not. Even when the last sentence is said, lights fade out, we are confronted and reminded the whole time: the reality that the killings never stop, and possibly at that very moment, in another place, another victim falls, and somebody is grieving and wailing for justice.

Sa Digma ng Halimaw is necessary theater. Because truths, no matter how painful and brutal, are told. And outside the four walls, as we go out, it is necessary to fight.