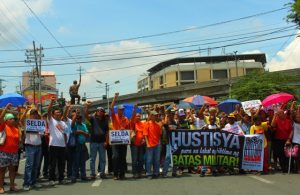 “Stopping the reparation and recognition of our claims may be tantamount to non-acknowledgement of victims of martial law.”

MANILA — Martial law victims criticized the Office of the Solicitor General (OSG) for blocking what could have been the third tranche of compensation for them.

In a statement, the Samahan ng Ex-Detainees laban sa Detensyon at Aresto (Selda) questioned the motives of the OSG in rejecting the settlement agreement that would have given martial law victims a total of $13.75 million from the sale of the paintings recovered from Imelda Marcos’ private secretary Vilma Bautista.

In a report, Solicitor General Jose Calida said that terms of the agreement “were found to be grossly disadvantageous to the government and not in accord with existing Philippine laws and jurisprudence.”

Reacting to Calida, Danilo dela Fuente, Selda vice chairperson, said the move is more disadvantageous to the victims of human rights violations under the Marcos administration. “Stopping the reparation and recognition of our claims may be tantamount to non-acknowledgement of victims of martial law.”

The group feared that the OSG’s move is part of the rehabilitation of Marcoses, noting that President Duterte himself has repeatedly denied the fact that the Marcoses committed plunder.

Dela Fuente said the government should be first to work on the recovery of all funds related to Marcos ill-gotten wealth. “They have the obligation to do so,” he said.

“In the first place, the victims and the members of the class suit have a rightful claim to the settlement. They proved time and again that the late dictator [Marcos] and his family should be made accountable for decades of their rule. They (victims) have all the right to assert and demand justice and compensation,” Dela Fuente said.