The COVID-19 pandemic brings to the fore the economic divide 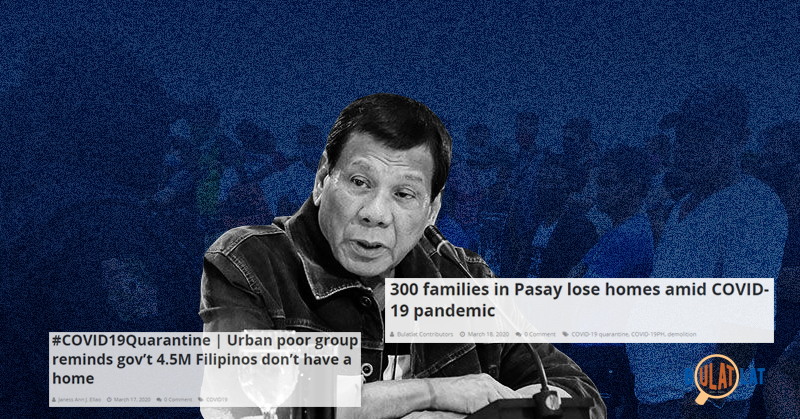 As the number of confirmed COVID-19 cases in the Philippines grows, the Duterte administration scrambles to figure out an appropriate response. Its latest solution is a total lockdown in the form of an “enhanced community quarantine”, with the stated goal of stopping the movement of people.

The actual results, however, are way off the mark. Less than three days since the implementation of total lockdown we’ve seen workers stranded and unable to go home; neglected urban poor threatened with arrests if they don’t “go home”; local governments bungling the delivery of basic needs to their constituents.

Meanwhile, Duterte and his inter-agency task force are hard at work protecting the economic interests of big business. A P27-billion COVID-19 budget has P14 billion allotted for “tourism and other projects”, while the IATF’s lockdown guidelines specify no stoppage for the flow of cargo and export goods while grinding mass transport to a halt.

We are essentially looking at a public health issue being solved through economic protection of the few and sanctions against the poor. Instead of mass testing and sanitation programs, we get private corporations imposing guidelines on work schedules and
leaves. Instead of a medical solution, we get an administration that’s going above and beyond to ensure that the nation’s big enterprises remain afloat while neglecting the workers who actually keep things going.

It might seem disingenuous, but at its core, the COVID-19 pandemic is not just a public health crisis, but an economic one as well. And for a semi-colonial, semi-feudal economy like the Philippines, one cough could have us all spiraling into deeper crisis.

There is an almost symbiotic relationship between a nation’s economic system and the way people move about it. We can see that when workers respond when asked why they’re still outside with, “I have to work.” The economy is what drives people to produce, and ultimately, what pushes human behavior.

Conversely, when something restricts that behavior and that production, it’s the economy that suffers. The Luzon-wide lockdown has killed the public transport sector and forced millions of workers and farmers to simply stop due to quarantine. The pandemic has attacked not only our wellbeing, but our economy as well.

And it’s this attack on the economy that has laid bare the glaring flaws in its system. Our fragile set-up, with foreign corporations, landlords, and neoliberal import-dependent-export-oriented policies, is shaking at its unsustainable core because of the pandemic affecting every economic system’s most important element – its people.

It has exposed the glaring contradictions between what workers care about – life, security, a chance to live; and what employers prioritize – profit maximization, loss reduction, how to get away with not paying their workers for one month. It is the private school insisting on collecting payments for tuition amid a crisis. It is call center agents being forced to come to work or risk not getting paid. It is the construction worker crossing the border between Laguna and Metro Manila, only to be turned away for not having an ID.

This is why the government offers a military solution to a public health issue, or why the country’s urban poor and informal sectors are left to moan, “The government has forgotten us”, or why it allows businesses to remain open while forcing the tricycle drivers and jeepney operators to stop.

Of course, this crisis has existed long before COVID-19; the disease merely made it worse. But unlike COVID-19, there is a definite cure: struggle. We are now facing a fight on two fronts: the medical one which attacks our communities and our immune systems, and the socio-economic one which engulfs our society in an exploitative wheel of suffering.

We must strengthen our labor unions, embrace the fight for students’ rights, push for land, peace, and justice in the countryside, remain vigilant against state fascism, arouse, organize, and mobilize the masses towards an end to exploitation and the road to national liberation.

Only then can we rid ourselves of the virus.