You Are Here: Home → 2020 → September → 29 → In search of methods to fight historical revisionism

In search of methods to fight historical revisionism

In a recent online conference around the topic of how to fight historical revisionism, I found myself sharing a panel with historians Roy Mendoza of the Ateneo de Manila University and Maria Serena Diokno of the University of the Philippines, Karina Bolasco of Ateneo de Manila University Press, and Rowel Padernal of the country’s top education bureau. Mendoza argued that deception lies at the core of what he called the “Marcos DNA,” while Diokno presented extensive evidence showing how, inter alia, the powerful have colluded to twist historical truths to advance, time and again, their vested interests. For her part, Bolasco underscored the need for textual literacy about the effects of martial rule in the country and, more pressingly, for what she referred to as “middlemen” who could render such literacy intelligible for a vaster audience. As a scholar of rhetoric and performance studies, I explored how modifying political histories could be comprehended as a rhetorical and performative enterprise that particular personalities and institutions continue to aid and abet.

All of us agreed that historical revisionism has been rapaciously utilized to further the agendas of certain political factions. Furthermore, all affirmed the urgency of battling any unfounded manipulation and deliberate debasement of historical facts. But our discussion turned thicker when Padernal, the last one to talk in the group, cited his own experiences with public school teachers who attended one of those forums revolving around the Marcos dictatorship that the Department of Education would organize outside Metro Manila. Some attendees, according to Padernal, fumingly accused their resource speakers of bias. Emphasizing their internalized knowledge about and their personal experiences during this time of dictatorial duress, they took offense against, if not squarely refuted, the information and the interpretation conveyed to them. 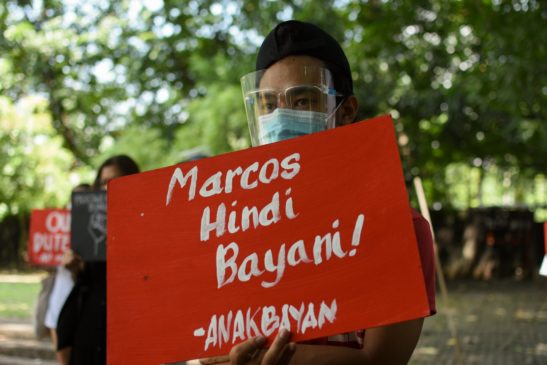 What this repudiation lays bare is a gap between embodied reckonings. Likewise, it brings into focus a crisis in our ongoing labors to cultivate social consciousness and historical thinking among Filipinos. It is a crisis that not only provokes us to recognize the limits of our understanding about the lasting impacts of a Marcosian presidency but also prompts us to reassess the effectiveness of the methods with which we write, talk about, and stage history. Why can’t these pedagogues identify with and, more so, accede to what we, all along, have known as truths, facts, and realities?

Over the years academics have steadily yielded publications, performances, documentaries, films, songs, and other art pieces that respond to the injunction to never forget the darkness and violence of military rule. In addition, they have supported the conceptualization and construction of different sites of memory, such as museums, exhibitions, and shrines, as well as spearheaded various acts of remembrance, such as concerts, forums, and conferences. Not only do these clarify the critique against dictatorship and fascism, but they also shore up a set of universal values and principles with which a tyrant like Marcos may be understood.

It is not difficult, though, to notice how some of these interventions come from agents entrenched in historically elite social institutions, such as the school, which perpetrate highly intellectual, textual, ceremonial, and spectacular forms of remembering. In being so, it is unsurprising that they may—and do—alienate, if not completely dissuade, those who inhabit non-academic, non-literate, non-textual, and non-metropolitan communities.

These contributions have also seemingly gained a degree of rhetorical stability. How many times, for example, have they extolled the same set of people as the rightful heroes of the People Power Revolution? What images of good and evil have they solidified? What default storylines about the Martial Law period do they narrate or visualize? Surely, acts that tell the same stories, single out the same protagonists and villains, highlight the same crucial events, and marshal a consistent set of ideals can propel the fight against historical revisionism upward and forward.

But while these acts can derive their persuasive force from the number of times they get repeated, the opposite is also true: their frequent repetition and lack of difference may likewise be the source of their diminishing social currency. While the familiarity, if not permanence, of these acts may enable the physical and symbolic convergence of their proponents and believers, it may also be other people’s source of alienation and disenchantment.

Having said that, fighting historical revisionism cannot just be about presenting accurate stories again and again. Instead, it must also be about coming up with techniques or methods that can help this fight to duly grow beyond its identifiable affiliates and subsequently persuade others—specifically those who do not readily share our knowledge systems, value judgments, political lines, and ideological beliefs—to contribute to this growth.

Such a process might entail academics to recalibrate the pedagogical positions with which they start and nourish their cherished conversations. It might require them to reframe the political rationality and modern literacy in which they engage those who apprehend with less clarity and certainty the histories or historiographies they have fulsomely mastered. And lastly, this procedure might demand academics to listen more openly, carefully, and tolerantly to the voices of those loosely organized on the ground and of those located outside the institutional enclaves where they have, for the longest time, solidified their standpoints and fostered their enduring ties.

In suggesting these points, I do not intend to discredit the gains of both united and scattered fronts that have boldly confronted the Marcos regime and its afterlives, and indefatigably continue to do so. Much has been achieved in terms of bringing to the open the extent of a dead dictator’s plunder and moral turpitude, as well as the bottomless ambition of his kin and cronies to strengthen their political grip in the present. Much has also been accomplished in terms of commemorating the stories of the unjustly jailed, the mercilessly tortured, and the heartlessly disappeared.

Without watering down the existing determinations to chronicle the events that unfolded under tyrannical rule, my goal instead is to encourage us to lock horns with aspects of our prevailing political critiques and narratives that may now benefit from some thoughtful reworking. After all, defending history from any political or politicized amendments cannot thrive simply by regurgitating overdrawn acts and readymade scripts or by canceling out different opinions and unassimilated alliances. To argue along these lines is not to compromise the fight against historical revisionism. Rather, it is to accentuate how such a struggle needs a patient attunement to, if not a reflexive engagement with, the broad demands and sympathies of an ostensibly hard-to-change world.

Here I am thinking of those teachers who continue to disengage themselves from discussions on erstwhile and emerging authoritarianisms. Certainly, they are the ready targets of systematically peddled lies, fakeries, and disinformation. But they equally constitute a unit that we must be able to win over and forge comradeship with. To say from the get-go that they are placed under some faux ideology is to reduce them to ahistorical entities. To invalidate their views and sentiments is to miss the chance to learn from the grammar of their affects and the logics of their practice. Additionally, to brand them as the unenlightened human fragments of the Philippine nation is to turn away from the obligation to extend the conversation, if not expand the solidarity, to people like them. What is worse is that it is to jettison these teachers altogether from our championed discourses and practices, which we might end up prudishly claiming as our own task, not least our sole privilege, to determine and direct.

If it is true that there is a big disjuncture between those who persistently write and tell the wrongs of martial rule and those who could not yet fully connect to these tales written and told, then shouldn’t finding a way to narrow this gap become an essential phase in our political work? Even more important, shouldn’t guaranteeing that the fight against historical revisionism will continue to be a widely multi-sectorial initiative—one that is not easily held hostage or exhaustively saturated by a monolithic ideology, a dominant aesthetic, and most especially, a ruling class—compose our unending responsibilities? These queries are crucial because aside from foregrounding the pitfalls of religiously sticking to hardened ways of memorialization, they also remind us that outside the circles we keep and bind with a common cause, there are people from specific geographical locations and social circumstances that our longstanding rhetorics, narratives, ideas, and performances wittingly or unwittingly bracket out.

Our collective duty, now more than ever, is to keep the crusade against historical revisionism going. But even or especially this has to be coupled not only with a tireless interrogation of the tropes and plots that passionately move us, but also with a constant search for ways to open up the struggle to those people who, though not yet sharing our views and passions, should never be left completely shut out from our continuing dreams of a collective future.

* The author is assistant professor at the Department of Speech Communication and Theater Arts, University of the Philippines and member of Tanggol Kasaysayan.