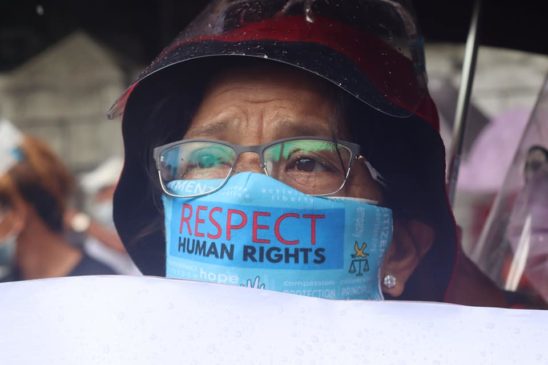 “There was no coercion, force, deceit, misrepresentation, favor or any other act or omission that vitiated the free, prior and informed consent of the Aetas to agree to the filing of the Petition-in-Intervention.”

MANILA – The National Union of Peoples’ Lawyers (NUPL) categorically denied that the two Aetas were forced to sign the petition for intervention seeking to nullify the Anti-Terror Law.

The NUPL refuted Solicitor General Jose Calida’s claim that Japer Gurung and Junior Ramos were coerced into signing the petition filed with the high court last week. The group said the two Aetas could not read or write so they just affixed their thumbmarks , after NUPL lawyer Julian Oliva Jr. “meticulously explained to them the Anti-Terrorism Act, the pending petitions before the Supreme Court, and the final draft Petition in Intervention.”

“There was no coercion, force, deceit, misrepresentation, favor or any other act or omission that vitiated the free, prior and informed consent of the Aetas to agree to the filing of the Petition-in-Intervention as the well-documented (videos and photos) consultations with Atty. Oliva was conducted before a long table separated by a plastic barrier within sight and hearing distance of the BJMP guards,” the group said in a statement.

In an interview with Altermidya, Katherine Panguban of the NUPL took offense at how officials of the Public Attorneys Office and the National Commission on Indigenous Peoples (NCIP) visited the two Aetas without the knowledge of their lawyers. Panguban revealed that they received information that NCIP representatives have been asking Gurung and Ramos to sever ties with the NUPL.

The group said they are ready to formally address in writing the OSG Manifestation and any Motion it may file in relation to its claims and serious allegations.

The NUPL will also wait for the copy of the SC resolution denying the petition-in-intervention filed in behalf of the Aetas.