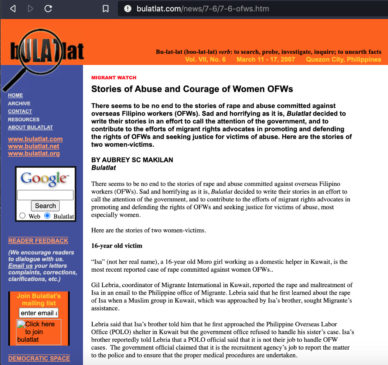 I joined Bulatlat right after university in 2002. Initially, I was doing more of website administration and the Photo of the Week section.

Bulatlat’s family grew the next couple of years, so was our coverage. Beats have been assigned for a more planned and regular release of sectoral articles. Thus, the birth of the sections such as Migrant Watch, Indigenous People’s Watch, Labor Watch, Women’s Watch and Human Rights Watch. Later, we expanded to cover other subjects like science and technology, health, the environment and culture. But, mind you, there were only three full-time writers then and each had about three to five beats to cover each week.

Migrant Watch was one of my beats. As migrant issues were becoming more disheartening and tragic, I would often find myself headed to the airport where families were anxiously waiting for their loved ones coming home in caskets, to migrant shelters where abused and injured domestic workers are recovering from their traumatic and near-death experiences, or to the family house of an overseas Filipino worker executed in the Middle East. Since there were no free Facebook calls yet then or other free meeting applications, and calls were expensive if I had to interview sources abroad, everything was limited to email – back and forth for follow up questions. Not to mention that internet access was still via dial-up connection at that time.

Migrante International and its members’ presence in several countries had been a big help in Bulatlat’s migrant coverage. Because of this straight connection to sources of news, it was not surprising that Bulatlat would have first dibs on these stories. Bulatlat’s migrant articles would show the people’s stories beyond the obvious issues these migrants were facing, expose the inaction of government officials and institutions that were supposed to protect them, and showcase the strength of the Filipino community abroad.

Consequently, many media outfits, including corporate media online webpages, were lifting Bulatlat’s articles on these migrant issues. We also started getting more regular contributions from Filipino expats, such as those in Canada and the U.S. Bulatlat also regularized yearend reports following the successful coverage of sectoral beats.

By being an independent and alternative media outfit, Bulatlat is able to uphold its mission to always “reflect the people’s views and stand on issues that affect their lives and their future” through the years.