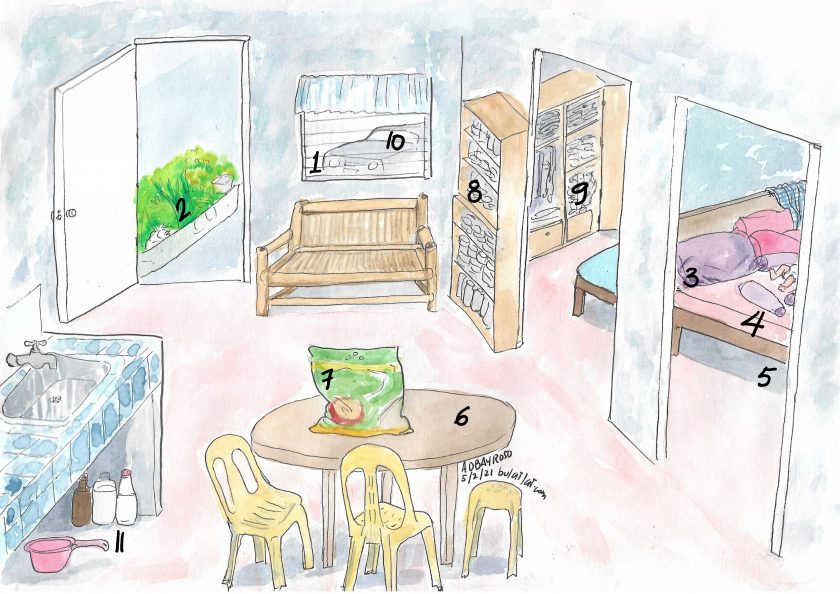 ILLUSTRATION AND TEXT BY DEE AYROSO

Where does the police usually find “concrete evidence” against the activists they arrest?

Police has been serving simultaneous before-sunrise search warrants since Oplan Sauron 2018, and this has resulted in mass arrests, worse, “nanlaban” deaths of activists.

Curiously, police serving a search warrant has recently yielded a standard output: a pistol, a few ammos of said pistol, a worn-out holster of said pistol (of course), maybe a magazine of an absent rifle, maybe a shiny, newly-made red flag with hammer and sickle. But most important of all, there is at least one explosive: a fragmentation grenade, maybe a pinya, mansanas, or even the cylindrical rifle grenade.

What is the big deal with the grenade? Well, illegal possession of explosives is generally a non-bailable offense. You get arrested on that, you stay in jail until a court dismisses the case.

Now, if one would illegally possess an explosive, you would think that one would put it in a place where one would NOT ACCIDENTALLY END one’s very own life, right? Or at least one would make an effort to HIDE the contraband? Nope, said police reports. Turns out people could be so irresponsible and reckless on WHERE they illegally possess their explosives! Yeah, “people.”

We listed a few of our “favorites” (read: most inane spots to plant evidence), and ranked them by level of insanity. Note that this is a partial list based on memory. There are so many, even crazier cases out there.

11. Under the kitchen sink. “Eat my cooking, or meet your Maker!” What purpose would a grenade in the kitchen serve?

In the case of the “Pampanga 18,” the 18 Central Luzon activists who were arrested in March 1989, police claimed the 18 were in illegal possession of a single hand grenade “found” under the kitchen sink of the staff house of the Alyansa ng Magbubukid sa Gitnang Luson (AMGL) in San Fernando, Pampanga. The case was dismissed in September of the same year.

10. Inside the car of senior citizens. Rey Casambre and Adel Silva, peace consultants of the National Democratic Front of the Philippines (NDFP), were arrested in separate incidents in 2018, in their respective cars, where police claimed they had guns and explosives.

Casambre, 67, was arrested with his wife, Cora, 72. Police claimed to have found INSIDE THE GLOVE COMPARTMENT of the car: a bundle of electric detonating cord, a .45 caliber pistol with a magazine and seven bullets, a grenade, AND A LAPTOP. All that in the space under the dashboard? The Cavite court set the case “for further investigation.”

9. Under old boxes and abubot. In 2015, when Sharon Cabusao-Silva was arrested, the raiding team claimed to have “found” a rifle grenade among old stuff in storage. The charges were dismissed.

8. On the shelf, with sari-sari store items was where police “found” a pistol, with which they charged Elizabeth “Mags” Caporal with illegal possession of firearms. That would come in handy when someone pays P1,000 bill for a P8-stick of yosi very early in the morning: Etong sukli mo, o, kwarenta’y singko. I’m sure that works, but only if you’re tending the store as Police MSgt. Jonel Nuezca.

7. Inside an eco-bag, with a bag of brown rice. Police initially claimed NDFP peace consultant Rafael Baylosis had a gun tucked at his waist, then later added he also had a grenade in a bag with his brown rice. The court found such claims “more imagined than real.” The charges were dismissed.

6. On the dining table. A popular spot where activists would find an assortment of firearms, ammunitions, explosives and “subversive documents,” all neatly laid out like food on a buffet table by police.

In the case of Morong 43, police “found” landmines on the breakfast table, along with the eggs, tuyo, and kamatis, I suppose.

5. In the bedroom, where the “magic” happens. Another favorite spot, where the raiding team walks in, and voila!, guns and bombs appear. This was the case for the Tacloban 5, which include journalist Frenchie Mae Cumpio of Eastern Vista. They have been detained since Feb. 7, 2020, on the basis of these bedroom guns and grenades.

4. More specifically, on the bed, under the bed, on the bed’s headboard. Or in a bag that suddenly appeared on the bed, such as in Pol Viuya’s case, where police claimed that a bag containing a handgun and bullets were just sitting there.

3. Even more specifically, under a pillow on the bed. Police said they found a grenade UNDER a pillow on Lady Ann Salem’s bed. Where she sleeps. Where she lays her beautiful, intelligent head. Seriously?! She and unionist Rodrigo Esparago were charged with illegal possession of firearms and explosives. The court dismissed the case citing a void search warrant.

The Morong 43 were also charged with illegal possession of grenade under a pillow.

By the way, after strong local and international pressure, government dropped the trumped-up charges against the Morong 43.

2. Outside the house. Now, THAT is a safe place for the illegal grenade owner, isn’t it? A bit of distance from the household members, in open air, under the sun. Did they leave it outside to be watered along with the plants? Or to be played with by the family pet? Or by CHILDREN?!

In the case of peasant leader Joseph Canlas, the hand grenade was in a plant pot at the back of the compound some distance from the house where he was staying.

Maybe it’s safer inside a backpack, in a flowerbox outside the house, as in the case of the 62 arrested in Bacolod in 2019.

Or, maybe…the raiding team failed to make it INSIDE the house, and just did their business OUTSIDE.

This was the case for Central Luzon activist leader Pol Viuya, in whose place police “found” a effing grenade sitting on a effing window sill just by the entrance. Okay, after they made it TO THE DOOR, under extreme time pressure, they stashed the “evidence” on the nearest spot within arm’s reach?

There are more than 500 political prisoners languishing in jail, many on trumped-up charges such as illegal possession of firearms and explosives. There are at the very, very least 5,000 killed in this regime’s drug war. All of them “illegally possessed” a shabu sachet and a “nanlaban” gun.

In the case of Kian delos Santos, police claimed he had a pistol tucked in his boxer shorts. Yes, the three policemen who killed Kian were convicted and are now serving time in jail, and rightly so. But what about the perpetrators of the Negros mass killings? The Tumandok 9? The Southern Tagalog Bloody Sunday massacre?

What about all the activists detained on basis of planted explosives?

Hmm, now where will they put – er, FIND explosives next? Worry not, China Coast guard and actual criminals, you’re safe. It’s going to be under another government critic’s pillow. Or window sill, whichever’s closest.