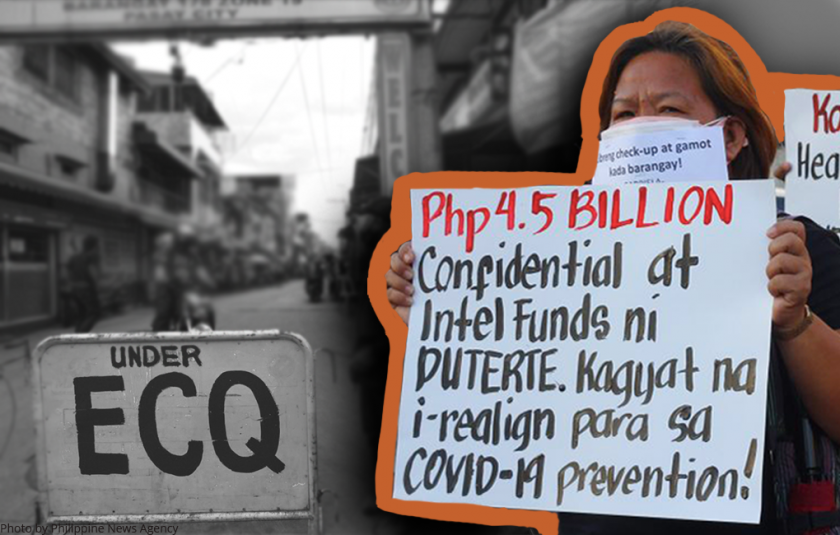 MANILA – With the government’s inability to control the rise of COVID-19 cases in the country, community health advocates are up in arms over the government’s response that, for the last 500 or so days, mainly resorted to stricter lockdowns.

The “painful decision” to revert to the tightest restriction came in the light of the confirmed local transmission of the Delta variant of COVID-19 and to prevent the health care system from being overwhelmed.

For community health advocates, however, another lockdown without mass testing, intensified contact tracing, and provision of financial aid to those in need, will lead the country nowhere in curbing the spread of the virus.

“Lockdown is empty if there are no strategies employed to contain the virus,” said Joshua Miguel Danac of Scientists Unite Against COVID-19, adding that “testing and contact tracing should be done, especially when not everyone has been vaccinated in the Philippines.”

For more than 500 days, the Philippines has been under varying levels of community quarantine, among the world’s longest and strictest. Despite this, COVID-19 cases continue to increase in the Philippines, compared to its neighboring countries.

In his last State of the Nation Address, President Rodrigo Duterte did mention that he plans to be “strict” if the delta variant becomes the dominant virus strain in the country.

During an online forum, the Coalition for People’s Right to Health (CPRH) said that COVID-19 tests in the country have stagnated at around 40,000 to 50,000 tests per day. This is a far cry from the Department of Health’s own target of 100,000 tests daily.

The CPRH said that most of the 276 COVID-19 testing laboratories in the Philippines are clumped in major cities and provinces in the country, leaving 31 provinces — 13 in Luzon, seven in Visayas and 11 in Mindanao — still needing to have their tests brought to nearby provinces, delaying the supposedly urgent COVID-19 response.

The coalition also lamented that the country’s contact tracing efforts remained far from ideal, with an average ratio of only 1:6 instead of 1:37.

“We are not doing enough testing and contact tracing. We are not cutting or controlling the transmission or spread of the virus. And if this continues, we may never get out of this pandemic,” said Danac.

Testing and treatment for COVID-19 are proving to be inaccessible for many Filipinos.

Per the joint administrative order of the Department of Trade and Industry and the Department of Health, prices for COVID-19 testing kits should be around P4,500 to P5,000 (US$90 to US$ 100) in private facilities, and P3,800 (US$76) in public facilities.

But the CPRH noted that the price ceiling is still beyond the cost covered by PhilHealth which is only at a maximum of P3,409 (US$68.18), especially since more than half of the country’s testing centers are privately-owned (54% private, 46% public).

“We want Filipinos to look after their health, to have themselves tested, isolated, and quarantined. But if they fear all these expenses, they might as well just wait and hope that they can heal on their own,” said Joshua San Pedro, a doctor and co-convenor of Coalition for People’s Right to Health.

Danac said the country remains “blind when it comes to the true picture of variants in the country.”

As of writing, the Philippine Genome Center of the University of the Philippines is the only genome surveillance or sequencing facility in the country. At least a hundred million pesos ($20,000) is needed to be able to conduct genome sequencing in Visayas and Mindanao.

And not only that. After the government’s repeated proclamation that vaccines are the “only answer” to this pandemic, its rollout remains very slow.

Jamie Dasmarinas of Bantay Bakuna said only 4.27 percent of Filipinos have been fully vaccinated as of July 18. This, she said, is slow and insufficient as the current supply should have covered at least 14 percent of the population.

Taking from the president’s last State of the Nation Address, there remains no clear indication on how the government will prioritize the much-needed response to end the pandemic.

More than a year since the virus reached the country’s shore, health workers are still calling for mass hiring and protection of their ranks. In an online forum, Jocelyn Andamo, secretary general of Filipino Nurses United, said they remain overworked and underpaid as understaffing remains at a critical level.

There are also no concrete plans on how the government will address the economic decline in the country, with Africa describing it as the “worst economic downfall in Southeast Asia” that has so far left 3.7 million Filipinos unemployed. He added that financial aid will remain out of reach for many Filipinos affected by the new stricter lockdown.

Meanwhile, Bayan Muna Rep. Ferdinand Gaite said the president did not certify as urgent the Bayanihan 3 or “ayuda for all” bill that could have otherwise provided relief to struggling Filipinos. Yet, the government is allocating billions of public funds for infrastructure-related projects and the military.

Read: Bayanihan 3: Why the ‘ayuda for all’ bill must advance

“The government has funds. This is all a matter of giving priorities to providing financial aid,” said Africa. (JJE, RTS, RVO)