You Are Here: Home → 2021 → November → 5 → Why you should read the ‘Ethical Guide for Filipino Journalists’

Why you should read the ‘Ethical Guide for Filipino Journalists’ 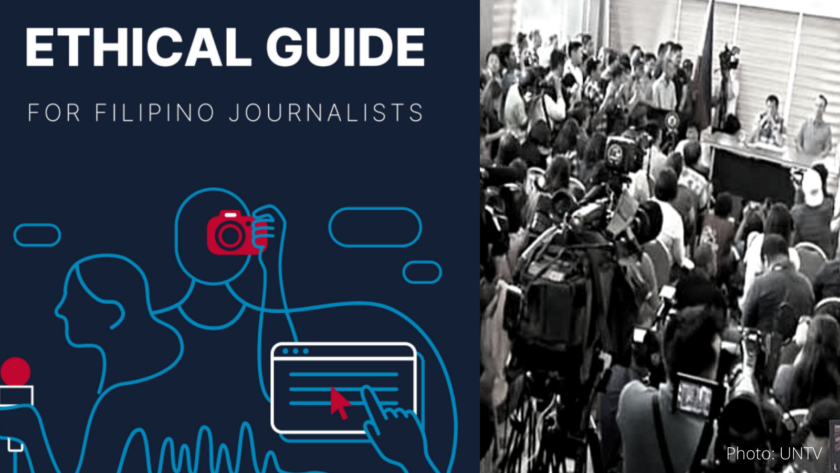 MANILA — A struggle to write and a love letter to the media.

This is how journalist DJ Yap described the Ethical Guide for Filipino Journalists which he wrote for the National Union of Journalists of the Philippines (NUJP).

“What I struggled the most was not about the writing [process], but the subject itself. A lot of times, the topic is hitting a little bit too close at home,” Yap said during the online launch of the 200-page media ethics book, describing it as the longest piece he has ever written.

The book is part of the NUJP’s effort to strengthen self-regulation in the news media and to update the Filipino Journalist’s Code of Ethics adopted in 1988, two years after the Marcos dictatorship was dismantled and democracy was supposedly restored. Since then, however, Filipino journalists continued to work under poor and dangerous conditions, making the country one of the world’s most dangerous places for journalism practice.

During the term of President Rodrigo Duterte, red-tagging has been intensified and rampant among the ranks of the media sector. The NUJP has documented 230 cases of attacks on the press, with 21 journalists killed without getting justice. The prevailing culture of impunity results in public distrust and chilling effect.

This revisiting of the Journalist’s Code also meant considering the challenges of the digital age like disinformation, troll farms, cyber-libel, and red-tagging.

The ethical guide is released a few months before the May 2022 elections where the media will play an important role, particularly in calling out lies.

“Writing this project is not about my personal perspective or my practices. It is not meant to dictate what we are supposed to do in our practice. Rather, it is intended to guide us, especially the younger journalists in our ranks, on how best to deal with the ethical dilemmas and moral quandaries that we face on the job.” Yap said.

Paul Soriano, project manager of NUJP and one of the book’s researchers, said that the initiative is to update the 1988 code. “The times call on journalists to take stronger and more forceful steps in exposing and fighting such injustice within their ranks, to uplift their living and working conditions, and as an answer to the chilling effects of the prevailing culture of impunity.”

The 1988 code is composed of 11 guidelines approved by the NUJP, National Press Club (NPC), and Philippine Press Institute (PPI). Some of the ideas promoted by the 33-year-old Code may be considered advanced with its emphasis on truth-telling above the conventional notions of neutrality and objectivity.

However, the role of journalists in speaking the truth and exposing the lies has worn out as the code assumes a passive role for the journalists in preventing the distortion of the truth. “It falls short of their obligation to combat disinformation in the public sphere,” as written in the introduction of the Ethical Guide for Filipino Journalists.

The NUJP, through its chairperson Jonathan de Santos, said that this was not aimed to impose values among those in the profession.

Among the ethical dilemmas encountered by Filipino journalists, as cited in the newly-released guide, include low pay and limited benefits that “paint a staggering portrait of media compensation in the Philippines.”

“I don’t want to receive the envelope. But my editor said that this is the gray area of being a journalist. He told me not to judge my colleagues who are receiving it. Because again, community journalists are receiving very low pay,” Marchel Espina, a Bacolod-based journalist and one of the panelists, shared during the launch.

Over the years, Espina made a commitment not to accept these envelopes. As such, she had to take on other jobs to sustain her work as a journalist.

The ethics guide also delved into how journalists can call out lies – no matter where it was coming from. “A lie that is reported accurately is still a lie, even if the lie comes from high officials like the President,” an excerpt of the guide read.

For one, the Philippine media, particularly during the pandemic, has been repeatedly called out in their “live-tweeting” of President Rodrigo Duterte’s usual late night weekly addresses. The guide attributed this to reporters habitually trying to outdo each other “in getting that prized break on Twitter.”

“For so long, the press has always considered the statement coming from the president to be news, and under normal circumstances, there is nothing objectionable or unethical about reporting it directly as news,” the ethical guide read, “The rise of disinformation, however, has made this untenable.”

ABS-CBN journalist Mike Navallo said that the digital age has also increasingly shaped the media landscape over the decade: immediate access to the internet and news; more danger of trading speed to accuracy; the pressure of social media; rampant misinformation and disinformation; and the constructive relationship with audiences.

With social media, the role of the audiences are very engaging as they can directly question the works of journalists. Navallo narrated that there was an instance where a viewer asked him if he was tweeting the events of a particular public figure as a news report or as a statement of support, which he described as a “sad commentary” on what the media sector has become.

“Our audiences now have to know that we are doing this for coverage and not personal promotion. It reflects the kind of credibility that traditional media has now. It is something that we have to consistently work on— how we can maintain our credibility, how we regain their trust. While it is additional stress to our journalism, it is also a welcome opportunity to help improve our reporting,” he said.

The ethical guide also revisited core journalism principles that asked journalists to “strive to report and interpret the news truthfully and accurately without omitting essential information, distorting the truth or misleading the public.” It also looked into how to cover special sectors, such as children, women, LGBTQIA+, indigenous peoples, and persons with disabilities.

Journalists, therefore, must respond to the deliberate distortion of truth and the coordinated campaigns to discredit the press in a more critical and engaged way, not only by reporting the facts but actively exposing falsehoods and being more open and accountable to the public in their pursuit of truth,” the guide read.

Ronalyn Olea, NUJP secretary general and Bulatlat’s managing editor, ended the program by sharing her last conversation with the late Nonoy Espina, under whose leadership started the ethical guide. “We cannot act as saints with moral ascendency if we do not know the hells that our fellow journalists have to overcome,” she said.

The book’s essence is also to unite journalists in defending the remaining pillars of press freedom. Olea said, “While some admitted that they lapse on ethical judgment, one thing is certain: All Filipino media workers and journalists love their job. We love it so much even to the point that we live in destitution.”

She added, “But things cannot remain the same. The long and painful process of coming out with this Guide also affirms our resolve to push for the betterment of our conditions. As we always say, there can be no press freedom if journalists live under the conditions of poverty, fear, and corruption.” (JJE, DAA)