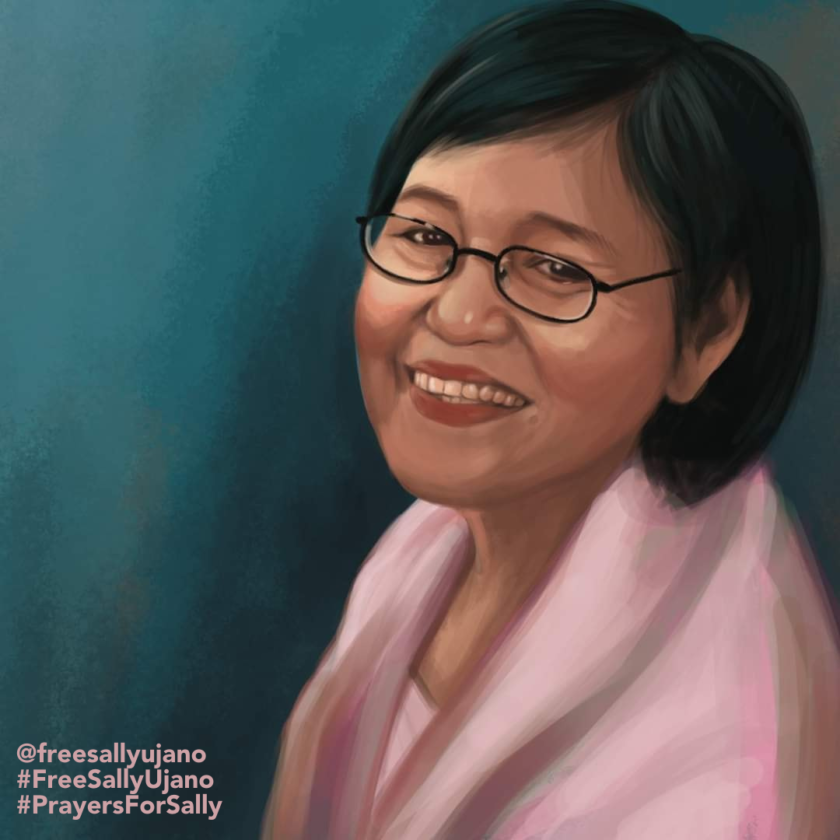 MANILA – “If you are not doing wrong, what are you afraid of?”

This line from Ma. Salome “Sally” Ujano, a long-time women and children’s rights advocate, was etched in the heart of her daughter, Karla Ujano, 36, as she grew up.

For the past 30 years, Karla witnessed her mother’s dedication in helping abuse survivors through non-government organizations of which she was a part of. Her mother was a regular speaker in conferences. In 2019, her mother proudly showed her a television interview where she shared her thoughts on child trafficking.

Never did Karla imagine her mother being put behind bars, portrayed by state forces as a rebel in hiding that she never was.

It’s been a month since Sally’s arrest.

Sally was arrested by the police at 10 am on November 14, Sunday, in Mabolo, Malolos City. The warrant of arrest, dated June 28, 2006, was issued by Judge Virgilio Alpajora of the Regional Trial Court Branch 59 of Lucena City.

She is currently facing rebellion charges, allegedly stemming from her ‘involvement’ in the ambush of two military personnel in Quezon Province in 2005.

Last week, Sally’s lawyers filed a motion to quash the rebellion charges against her.

“The claims against her are baseless. She is working with her organizations ever since. She never left her work and she is an open book— doing public interviews, media exposures, and other forms of public work,” said Karla in an interview with Bulatlat.

Sally as a wife, grandmother, and mother

For Karla, helping others in need runs in the family.

She described her mother as a go-to person for help, whenever there are conflicts in the family, financial problems, and even legal assistance. She said Sally was always accommodating and ready to help those in need in their community.

“She takes care of me when I am not feeling well. Even in the hospital or at home she reminds me to take my medicine and to eat well,” said her sister, Thelma Crisostomo, during the Awit at Dasal para sa Kalayaan: A Virtual Concert for Sally Ujano on December 6.

She is also a loving wife to her husband Vic, whom they lost to diabetes in 2016. When he drew his last breath, Sally stayed with him, singing him lullabies to ease his pain and suffering.

“They were a very sweet couple and we’ve never seen them arguing, maybe they kept it from us,” Karla shared.

She also shared how very open-minded her mother is.

“I can always tell her things that usually a family won’t talk about. She never imposes her learning on us but she lends me books like a self-help book that she thinks would help me,” Karla shared.

She also teaches her grandchildren music and gives them advice as needed.

Life of the party

A graduate of the University of the Philippines, Karla described her mother as “gifted,” having grown up in a family of dancers and singers. She is also very physically active, regularly dancing the Zumba as her daily exercise.

“She is a very active person. It even came to the point that we cannot match the energy that she gives to the people. There is no dull moment whenever we are together with Mama [Sally]. She wants everyone to be happy,” the family’s statement read during the Dec. 6 virtual concert that called for her release.

Sally, her daughter said, is often the life of the party whenever they have a gathering of family, friends, and colleagues. She dances and sings along with her loved ones during these occasions. One of her favorite song to dance with is “Dahil Sa ‘yo” by Inigo Pascual, as recalled by her daughter.

At work, Sally is described by her colleagues as a very dependable person.

She has dedicated herself to assisting survivors of abuse as part of the Women’s Crisis Center for decades.

Precy Tulipat, a former employee of WCC, said Sally is one of the key persons who established their organization in the 1980s. This would later lay the ground as a pioneering initiative in the women’s movement in the country. From 2000 to 2007, Sally was its executive director.

“She had been actively spearheading our programs such as the feminist crisis counseling, training and education, policy advocacy, survivor’s organizing, fundraising, and even guiding us in the establishment of National Network on Family Violence Prevention Program (NNFVPP),” Tulipat added.

The NNFVPP is a network convened by WCC that coordinates with cities and provinces in the country for the prevention of family violence.

She also developed training modules to help the Philippine police in addressing domestic violence. Later, they collaborated on this issue in a regional setting, studying all forms of violence with an intercultural perspective that could help countries including Bangladesh and South Africa.

“We are carefully documenting and responding to the cases of violence against women in the rural areas. Most of the time, we would ask for help from Ujano, and these happen frequently. That is why, we were in continuous and deliberate coordination with her, asking her to be our guide and resource person in our training,” Amparo Miciano of Pambansang Koalisyon ng Kababaihan sa Kanayunan said in the virtual concert.

After decades in the women’s movement, Sally decided to focus on the plight of children as part of the Philippines Against Child Trafficking (PACT), where she became the national coordinator in 2009. As part of her work, she represented PACT in different meetings and conferences both here and abroad and led its lobbying work that resulted in local governments adopting measures that push for children’s protection from trafficking.

Under her leadership, PACT established 50 chapters in the country.

Among other laws and policies that she lobbied are the Anti-Violence Against Women and their Children Act of 2004 and for the Philippines to attain the Tier 1 status in the United States anti-trafficking in persons (TIP) standards, which the Department of Foreign Affairs (DFA) hailed as the “right track.”

Being in the Tier 1 status meant that the Philippines has sustained efforts for the elimination of trafficking in the country.

“Sally has extensively served the people for years with her advocacy, offering her life for the welfare of women and children. She is already 64 years old, a senior citizen, and she does not need imprisonment but humanitarian consideration that would safeguard her from any sickness,” said Fani Velasquez of PACT as she offered prayers for her colleague during the virtual event.

Her mother’s contribution in promoting the interests of women and children, Karla said, is her mother’s best demonstration of her love for the Filipino people and the country.

During the virtual concert, Sally’s colleagues prayed for her immediate release and for justice to be served.

“It is deeply painful that she who has contributed immensely to society and our country is the one being arbitrarily accused without evidence,” said Amihan Abueva, regional executive director of Child Rights Coalition Asia, adding that “everybody should realize that the State must protect not only women and children, but also rights defenders who protect women and children.”

For Karla, on the other hand, her only wish is to be reunited with her mother, Sally, this Christmas.  (JJE, RTS)