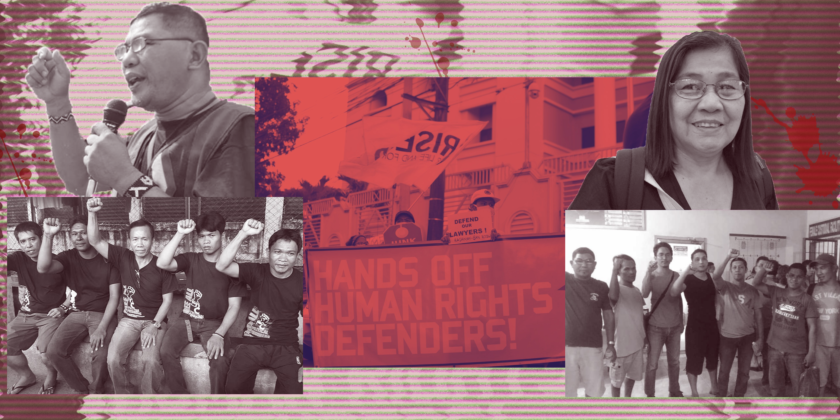 (Let us announce it.)

That is the reaction of human rights lawyer Czarina Musni on the dismissal of charges against 17 human rights workers and activists before a regional trial court in Agusan del Sur.

The victory is the latest in the list of trumped-up charges against activists dismissed by Philippine courts.

In an online interview with Bulatlat, Musni said that the dismissal of the charges is a “slap in the face” of authorities amid the relentless red-tagging against progressives.

The allegations stemmed from a reported raid and torching in Barangay Tubigon, Sibagat, Agusan del Sur last December 19, 2018, by alleged members of the Communist Party of the Philippines – New People’s Army. The guerrillas reportedly fled the scene along with two soldiers, 12 CAFGU Active Auxiliaries (CAA), and confiscated several firearms and ammunition.

A local court subsequently ordered the arrest of 555 individuals, including 17 human rights defenders and activists who are based in Mindanao.

According to Musni, of the 17, two were arrested – Teresita Naul and Vicente Libona – while the others were forced into hiding due to the warrants of arrest against them.

Naul has been released while Vicente Libona remains behind bars for other cases.

According to Judge Fernando Fudalan Jr., the charges are dismissed because of the John Doe warrants and the inordinate delay of reinvestigation.

The decision read that “the warrant has come within the contemplation of John Doe Warrant which in order to be valid requires description of accused appearance with so much particularity including but not limited to their occupation, appearance, exact place of residence and any other circumstance by means of which the officers serving the warrant will be able to justify them…”

Musni explained that a John Doe Warrant is a warrant where the names of the accused were just placed in the warrant, without particularity as to their identity. This she said, means that authorities can arrest and detain anyone they suspect of being a ‘terrorist’ without due process.

The court also rejected the affidavits filed by two army regulars and 12 CAAs as inadequate, saying that these simply described the accused with their alleged aliases and erroneous addresses.

On being behind bars

Since her release last October 2021, Naul has continued her work as a human rights defender.

Naul shared that as a subject of a John Doe Warrant, she was invited by the Criminal Investigation and Detection Group (CIDG) for an interview. The interview was conducted by men who introduced themselves as staff of the Office of the Presidential Adviser on the Peace Process (OPAPP). The interview lasted for five days, where she was repeatedly accused of being involved in the raid, forcing her to admit her involvement. During the interrogation, Naul claimed that she was subjected to verbal abuse and insults.

Naul requested to be transferred to Agusan del Sur, the source of the warrant, but the non-uniformed personnel ignored her request.

“On the third day, I decided to go on a hunger strike. I did not eat until they were forced to transfer me to Agusan del Sur,” she told Bulatlat in an online interview.

When Naul was transferred to the Provincial Correctional and Security Office in Agusan, she was placed in isolation because she had a higher risk of contracting COVID-19. During detention, the interrogation continued for almost two months, and because of quarantine protocols, she was refused to see visitors. She was only able to talk to her lawyer twice.

When Naul was released, she took time to rest and sought support from her close friends, lawyers, and the religious groups where she was affiliated with.

Despite being imprisoned for almost two years, Naul said she has no plans on giving up her work and remains unafraid despite the constant threats by state forces to her and her family.

She said that her detention justified her longing for the protection of our rights and encouraged her to continue with her work despite the risk of being detained again.

“Who else could help the people, especially the poor, but us?” she said.

Naul said that the only way to silence dissenters and dissent is to meet the needs of the people, especially the marginalized. She asserts that as long as she is alive and as long as there is abuse, she will not stop helping the people in need in asserting their rights.

Working for the release of other political prisoners, fighting for culture of peace

Such is also the case of Datu Jomorito Guaynon of Kalumbay Lumad Organization who remains imprisoned, church worker Aldeem Yanez of Iglesia Filipina Independiente, and other social development workers and leaders of human rights groups who were arrested in General Santos City, and released on bail.Their lawyers already submitted motions for reconsideration and motion to quash in the hope of a speedy disposition of the cases. But the case still has to be resolved.

Musni also said that they continue to work on the cases of other political prisoners and they have already received a number of positive decisions. However, she said that they did not disclose the decisions immediately for fear that if the charges were dismissed, more cases would be filed to keep their clients in prison.

Before Naul’s release, human rights group Karapatan said there are 178 of the 280 political prisoners in Mindanao were arrested under President Duterte.

Human rights groups recognize that their work entails risks but they are hopeful for the passing of the Human Rights Defenders Bill, now awaiting the Senate version. The bill seeks to strengthen the protection of sectors, individuals, and groups vulnerable from being red-tagged because of their profession and advocacy.

“Ensuring ourselves and our organization on false accusations is difficult, that is why we are striving to make noise about the injustices suffered by the victims as well as lawyers,” Musni said in an interview, explaining why they should stay vigilant when it comes to red-tagging.

Despite her optimism, Musni admits that because of their work, they constantly face threats and harassment, that is why she and her colleagues adopt measures that would increase their protection from possible threats.

Read: Amid threats to life, lawyers continue to fight for justice

Naul also urged Duterte and the next president to answer the root cause of the armed conflict, saying that as long as the people are hungry and exploited, armed resistance would always be an option.

She said that human rights groups will continue to fight tyranny by amplifying the plight of the masses, the voices of the oppressed, and the call of the indigenous communities for a dignified life.