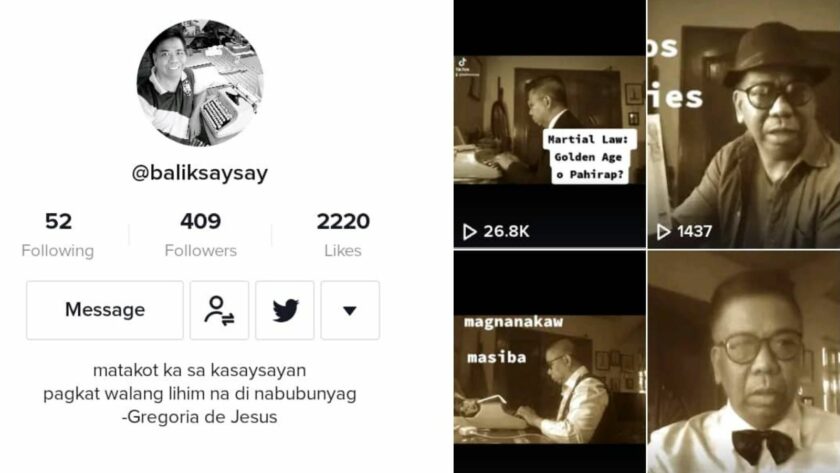 MANILA – A noted Filipino historian and the columnist behind Bulatlat’s Baliksaysay is bringing his fight against disinformation and historical revisionism to Tiktok.

“As a historian, I always ask myself: for whom and where will it take us? To whom are the narratives for? Is it for the ruling class? Or is it to pique the interest of the masses? I remind myself of the relevance of what I do and the significance of our history for me to keep on fighting for it,” Francis Alvarez Gealogo, former chairperson of the history department of Ateneo de Manila University, told Bulatlat in a phone interview.

TikTok, a short-form video-sharing mobile app, has been in the spotlight for apparently allowing disinformation in its platform. Still, there are many fact-checkers like Gealogo who have taken on the job of correcting disinformation in the proverbial belly of the beast.

His TikTok handle, Baliksaysay, comes from the Filipino root word “saysay,” which means narrative and relevance. As such, he said that he hopes that his TikTok account will not only remind people of bits and pieces of facts in Philippine history but also its continuing relevance. Among the TikTok videos he has posted are on Martial Law Terror, Marcos Cronies, and the Bataan Nuclear Power Plant to name a few.

“The historical revisionism perpetuated by the Marcoses is a serious matter. History is being distorted right in front of us and we should not be silent about it,” he said.

Gealogo said he took interest in history because he was always curious about how society functions based on its collective experience.

Born and raised in Cavite City, Gealogo graduated with a history degree from the University of the Philippines, where he also earned a doctorate degree in Philippine studies. He started teaching in 1987.

Teaching history in the Philippines, however, has been very challenging in recent years.

On April 14, 2014, the Department of Education (DepEd) issued DepEd Order 20, s. 2014 – ‘Additional Information and Corrigendum to DepEd Order No. 31, s. 2012, which removed the Philippine history from the basic education curriculum of Araling Panlipunan (Social Studies) in junior and senior high school.

Read: History teachers, activists teach the youth on the lessons of Martial Law

“How will students’ historical consciousness at the tertiary level be sustainable if they remove the Philippine history subject at the secondary level?”

Gealogo said there is very poor support and appreciation of the country’s history, even among institutions that are mandated to advocate for historical consciousness. This has resulted in what he refers to as “historical amnesia.”

“It is challenging to research among our archives. In other countries, libraries and archives are well-funded and supported. If you’re a researcher, you will face a lot of hurdles just to gather necessary data,” he said.

This challenge confronting history studies in the Philippines, he said, makes it easy for those systematically spreading disinformation and negative historical revisionism, and veer history away from recognizing people’s movement for change.

“As citizens and netizens, we should always be critical of the information we get on TikTok or YouTube. Our identity and integrity as Filipinos is at stake,” Gealogo said. (JJE, RTS)