You Are Here: Home → 2022 → May → 3 → On World Press Freedom Day, independent journos weather storm of attacks 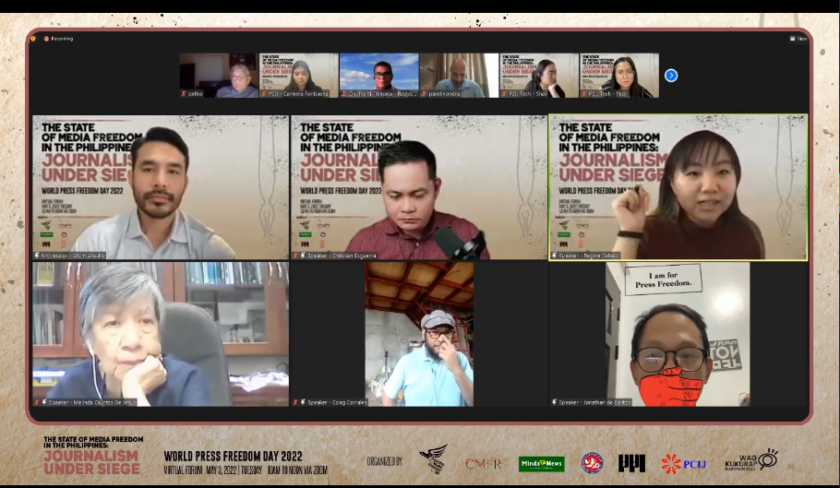 MANILA — Filipino journalists commemorated World Press Freedom Day with a warning against the increasing attacks against the Philippine independent media and concerns on the upcoming elections.

In a forum organized by the Freedom for Media Freedom for All Coalition titled, “The State of Media Freedom in the Philippines: Journalism Under Siege,” media groups emphasized that there have been 23 journalists killed under President Duterte and 258 cases of threats and attacks from June 2016 to April 2022.

Of these attacks, the coalition reported that 56 are libel and cyberlibel cases, while 145 were perpetuated by state agents.

“At least three journalists have been killed during the election period,” said National Union of Journalists of the Philippines chairperson Jonathan De Santos.

De Santos noted how attacks against journalists are being downplayed. While they welcome the investigation of the Presidential Task Force for Media Security, the debate sometimes “tend to go on whether it was work-related, or whether the victim was a journalist.”

“Actions and statements that tend to minimize and play down attacks and threats against journalists make these attacks more likely, and also make it more difficult for colleagues to report that they are victims,” said De Santos, citing the case of Baguio City-based journalist Aldwin Quitasol, whose shooting incident was downplayed by local authorities as the sound of a motorcycle backfiring instead of bullets.

Meanwhile, Joel Reyes, the mastermind behind the 2011 killing of environmentalist and broadcaster Gerry Ortega, remains free and is even running as governor in Palawan.

De Santos emphasized the rampant red-tagging among journalists. This has escalated to filing of trumped up charges that put journalists behind bars as in the case of Tacloban City-based journalist Frenchie Mae Cumpio, who remains in jail as of this writing.

Before her illegal arrest, Cumpio was repeatedly labeled as a ranking member of the Communist Party of the Philippines.

Center for Media Freedom and Responsibility executive director Melinda de Jesus noted the increased cyber-attacks against the press from November 2021 to April 2022.

De Santos noted the emerging number of election-related incidents, including the Commission on Elections very own commissioner Rey Bulay who threatened to sue journalists for libel if they ‘”misinterpret” him. Meanwhile, there has been cases of journalists being barred from covering presidential candidate Ferdinand Marcos Jr.’s campaign trail.

Despite the difficulties, the NUJP urged their fellow journalists to remain steadfast, saying that the Philippine media “will not rise or fall on the outcome of the May elections, that the work we do will continue whoever is in power.”

The group said, “every election is a reckoning for democracy.” (JJE)