You Are Here: Home → 2022 → May → 16 → Question Everything | Affirming solidarity and redefining development during the pandemic

Question Everything | Affirming solidarity and redefining development during the pandemic 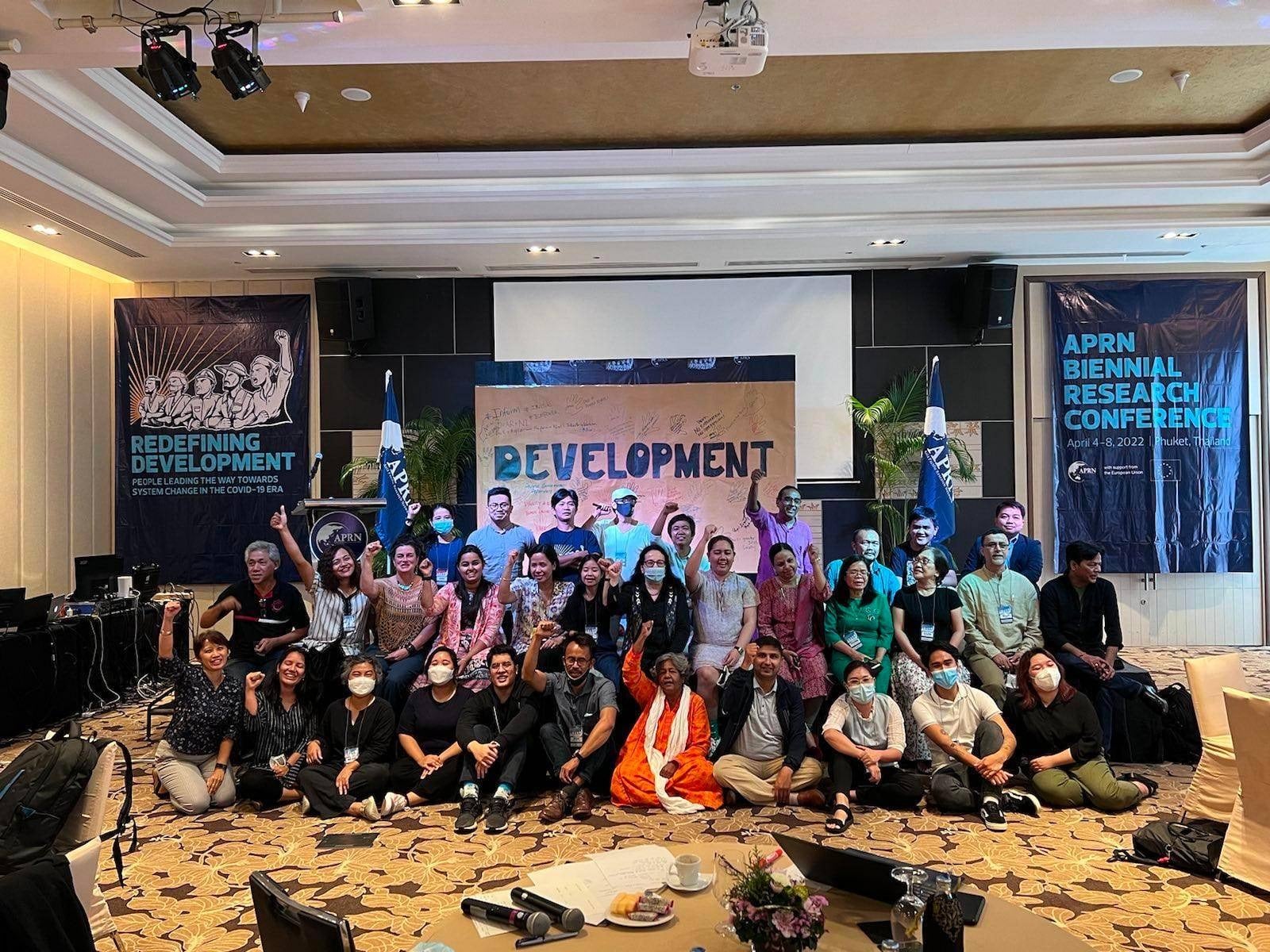 A group of researchers and activists from across Asia gathered during the first week of April in Thailand to discuss the impact of the pandemic on the region’s marginalized communities and how people’s movements are putting forward an alternative model of development.

The gathering was organized by the Asia Pacific Research Network as part of its biennial research conference.

During the first day of the conference, keynote presentations provided a comprehensive historical background of the people’s engagement with key stakeholders and institutions like the UN on the measures adopted to mitigate the harmful impact of monopoly capitalism. The discussions highlighted that people’s resistance is the only path we should embark on if we want to truly make a difference in the lives of the people.

The panels and workshops during the succeeding days tackled how unfair trade agreements and imperialist funded projects were implemented to extract super profits while exacerbating the suffering of the working people. The workshops also identified the violent legacy of imperialism, how it remains the biggest threat to humanity and why the popular call for world peace is a futile appeal as long as imperialism is not defeated.

I was invited in the conference to give an input about the role of the people’s struggle in redefining development as the world continues to deal with the disruptions of the “new normal”.

I first talked about the social and political ramifications of what it really means to live in the so-called COVID-19 era.

At the global level, we are aware that recovery from COVID is uneven. The world is not flat, especially when it comes to vaccine distribution and recovery from the debilitating consequences of the two-year pandemic. Some suffered more because some were too greedy to hoard vaccines and other resources needed to deal with the pandemic.

Despite the differences in how we experienced real existing pandemic, we detected an alarming pattern of how repressive or authoritarian governments adopted even more repressive and authoritarian measures under the guise of addressing the pandemic.

The pandemic response of governments featured extreme restrictions which included militarized lockdowns and harsh punishment for quarantine violators. It allowed some governments to weaponize laws in the fight against COVID-19 misinformation but was in fact used to spread fear and persecute activists, journalists, and critics. Even if mass vaccine rollouts are already in place, the lingering devastating impact of the pandemic will remain a convenient excuse for authorities who seek to enforce strict social controls such as intensified technological surveillance, broader internet regulation, institutionalized media censorship, and faster prosecution and detention of individuals. After the surge and as citizens adjust to the “new normal”, authorities won’t willingly give up the coercive powers they gained during the state of emergency. They will appropriate the language of the pandemic lockdown to demand uncritical compliance from citizens while tagging the efforts of the independent media, civil society, and other public institutions as potential threats to public safety

During the second part of my presentation, I talked about reclaiming the right to shape our future by challenging the dominance of imperialist powers and big corporations. We are not naïve to believe that their actions are motivated by good and charitable intentions. When they invoke the “new normal”, they define it according to their selfish interest. For imperialist powers, it means the continuing right to exploit the resources of the world and meddle in the affairs of poor nations under a new set of circumstances caused by the pandemic. For big corporations, it is the inviolable right to demand reforms, concessions, and privileges for them to earn super profits even if the pandemic has caused unprecedented suffering for most of the working classes in the world. They want to continue shaping the world according to their self-serving agenda despite the wars, the mass famine and starvation, the wage slavery, and inequality they caused in the world. They have no credibility to talk about the “new normal” if they merely want to reinforce or boost the privileges they already enjoy.

Therefore, the task of shaping the “new normal” should come from the actions of the people; it should be the outcome of our political organizing. We should claim the narrative of the “new normal” in order to reclaim our right to enjoy a better future.

In pursuing this task, I cited several promising trends that people’s movements should endeavor to harness. For example, we have young people at the forefront of renewed climate activism. There is increasing public awareness of climate issues and the role of community resistance in putting a spotlight on climate issues. We saw the emergence of community care and citizen-led initiatives during the pandemic in response to the slow and inadequate relief efforts of incompetent governments. Despite the heightened state repression, citizen pushback achieved varying levels of success in building democracy movements and resisting authoritarian regimes. Finally, there is increasing realization that no less than a system change is needed today.

Group discussions were followed up by more enriching conversations during coffee breaks and informal meetings. We learned about how theories of development and social change are creatively applied by people’s organizations across the region. Most participants are not laptop researchers but members of civil society networks actively working in the grassroots. They shared valuable insight about how imperialism wreaks havoc in the lives of the communities they serve and how this engenders local resistance and political engagement. This kind of interaction and in-person solidarity is what we missed during the first two years of the pandemic.

The conference took place at a time when the region’s civic space was recovering from the prolonged pandemic lockdowns. It also became a venue to explain the unfolding crisis in Pakistan, Sri Lanka, the farmers’ protests in India, the democracy movements in Thailand and Indonesia, and the bewildering return to power of the Marcoses in the Philippines. We went back to our respective countries carrying not just a broader knowledge of the people’s struggles in Asia but also testimonies of solidarity from fellow activists and people’s researchers. Indeed, our local struggles are linked to the people’s movements in other countries as we build a stronger resistance against imperialism.