You Are Here: Home → 2022 → August → 25 → Not so sweet life for Negros sugar workers due to price hikes, alleged shortage

Not so sweet life for Negros sugar workers due to price hikes, alleged shortage 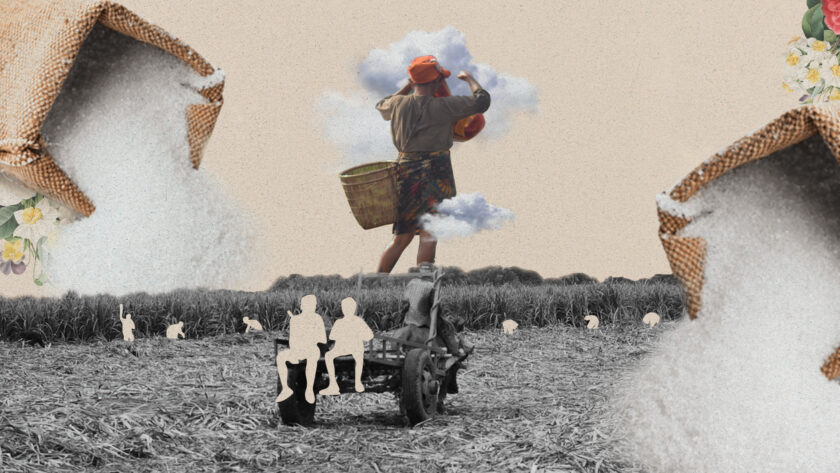 Amid increasing prices and alleged supply shortage of sugar, life remains bitter for the sugar workers of Negros.

MANILA — For more than two decades, sugar worker Rubin Garfill, 48, has been tilling a portion of the sugarcane plantation of Hacienda Mariano-D in Silay City, Negros Occidental. In 2013, he and fellow sugar workers filed a petition for the vast estate to be covered by the government’s agrarian reform program. However, actual land ownership remains a pipe dream.

Every week, Garfill earns from P900 (16$) to P1,200 (21$) per week, even if the price of sugar has increased over the years. “While sugar prices are increasing, the same goes for the basic commodities – bread, soft drinks, and everything that uses sugar. This means that our day-to-day expenses are also increasing.”

To address the increasing prices and the alleged shortage, President Ferdinand Marcos Jr. approved the importation of 150,000 metric tons (MT) of sugar.

Reacting to the government’s decision, Garfill said, “The government needs to look first at the big traders. We are producing an ample amount of sugar, but big traders are withholding these products to manipulate the price.”

Garfill said sugar importation will gravely affect small planters like him. “They are going to look for a cheaper source, while support has yet to be provided to us. Our situation worsens as we spend more money on fertilizers.”

Aside from sugar, the inputs required to produce sugar are import-dependent. Recent data from the Department of Agriculture show that 95 percent of fertilizers are imported, as it has been subjected to continuous price increases through the years.

In an interview with Bulatlat, National Federation of Sugar Workers (NFSW) spokesperson Butch Lozande assailed the recent decision of Marcos Jr. to continue the proposed sugar importation, citing that doing so in the middle of the harvest season will only benefit traders while farmers face far lower farm gate prices.

The latter, he added, could mean losses for farmers as production costs have increased as well. There was a 200-percent increase in prices of imported fertilizers for sugarcane, now amounting to about P2,400 to P2,700 per bag.

The standard number of fertilizer bags needed for sugar production is at least 16 to 18 per hectare.

“Soon, sugar producers will be cost-cutting by lowering wages to sustain their business. Sugar workers may either lose their work or be given slave-like wages,” Lozande said. He added that small planters may not be able to sustain their operations, which could force them to sell their lands back to the landlords.

Lozande said that this is not the first time that a crisis has hit the country’s sugar industry, which has long been monopolized by Marcos Sr. cronies.

In 1986, Washington Post reported that anomalies in the Philippine sugar industry resulted in $1.15-billion losses from 1975 to 1984, resulting in widespread unemployment of more than 600,000 sugar workers, particularly in the Negros region.

As a result, poverty struck the whole of the province under the Marcos Sr. dictatorship. A 1990 international study revealed that majority of households in Negros live below the poverty threshold. The provincial government said that a family of six needed P90 daily to meet basic needs back then but the workers only received P24 daily.

NSFW also noted that the decrease in the production of sugar may be related to the significant decrease in sugar land areas.

Their study revealed that the sugar land areas in the 2013 crop year were estimated to reach 424,000 hectares, while the 2022 crop year only has 397,000 hectares. Lozande attributed this to the continuing conversion of sugarcane plantations to subdivisions.

To avoid another repeat of the impact of the crisis on the sugar industry, Lozande said Marcos Jr. should instead take bold measures to strengthen production. This, he said, includes subsidy and well-rounded support to sugar farmers; prevention of land-use conversion, humane wages and compensation; and upgrading the obsolete level of sugar mills.

For now, it is tiempo muerto for Garfill and many sugarcane workers and small planters. The dead season or tigkiriwi (lull between planting and harvest seasons) usually results in hunger for sugar workers and their families. This season prompts sugar workers like Garfill to work elsewhere, such as in construction sites, while waiting for work to resume at the plantation.

Garfill agreed with Lozande that the government should support small planters by giving them economic aid and subsidies. (JJE, RTS, DAA)