In earlier days, Aling Celia said basic necessities such as water and electricity were supplied without charge until 1991 when they began paying for these. As most households have no money to spare for private water connections, they get their water supply from public pumps.

To earn extra income for her family, Aling Celia says she sells fish balls and sago (pearl coolers) during school days. She says some mothers like her get extra income by doing the laundry or working as “special offer” ladies selling soap and toothpaste. .

Having only PhP194.50 gross pay for a day is made worse by having only two working days a week. If a sugar farm worker gets to take home PhP9.50 a day as net pay, he or she would only have PhP19 a week. “It’s not even enough to buy a kilo of rice,” said Aling Celia.

Diminishing man-days, or the number of workdays available for every sugar worker, are significantly affected by land-use conversion and mechanization in the hacienda. Since 1988-1989, guaranteed man-days have drastically dropped because of less manual work available.

As stockholders, sugar farm workers supposedly own 33.2 percent of the outstanding capital stock of the HLI. A total of PhP118 million should be distributed to the farm workers within 30 years. But as the hacienda has 5,339 work force, each sugar farm worker gets only Php800 to Php1,000 per year. 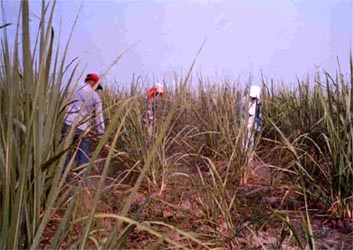 Farm workers at the hacienda. (Photo by Dabet Castaneda / bulatlat.com)

But since their share as stockholders depend on the number of man-days they accumulate per year, each sugar farm worker only accumulates a total of 80 guaranteed man-days a year which is equivalent to only PhP200 a year.

Land conversion and mechanization of production

When the hacienda was acquired by the Cojuangcos in 1958, its total land area was 7,200 has. It has

Tractor used for weeding
dwindled to only 3,200 has. today due to land-use conversion. Parts of the hacienda have been converted into the Luisita Golf and Country Club, the Las Haciendas Industrial Subdivision, the Luisita Industrial Farm (Phases 1-4), the Family Park Homes Subdivision, and the Don Pepe Cojuangco Subdivision (Phases 1-4). Meanwhile, the St. Luis Subdivision is under development, while Japanese investors have bought a part of the hacienda where the 500 ha-Central Techno Park is under construction. Around 66 hectares have also been reserved for the construction of the Subic-Clark-Tarlac Expressway project which is expected to be completed by 2005.
Boyet Galang, chair of the sugar farm workers group Ambala (Alliance of Farm Workers in Hacienda Luisita), said that the management has often told them that the land conversion projects will benefit the sugar farm workers and their families. “The HLI management promised us that the work force needed in the industries that will be put up in the business park will come from our families but at present, only 25 percent of the work come from us,” he said.

He added that the management would usually turn down applications coming from children of identified peasant organizers in the hacienda. “They are afraid that our children will also join the industry unions and would join strikes,” he said.

The HLI management has also acquired several high-tech machines for farming, water spraying, for the use of fertilizer and harvesting sugar.

Thus to fast track the retirement of its work force, the HLI management has used the voluntary/optional retirement scheme. Based on a retirement form a worker is asked to sign, the HLI’s Manpower Reduction Program mentions that the company “has been constrained to undertake [the measure] because of continuing adverse business conditions.” Galang accuses the company of resorting to manipulative measures to retrench its workforce.

With the available man-days diminishing and the force retirement program underway, about 5,399 sugar farm workers are about to lose their jobs. This number would add up to the large number of jobless Filipinos who, in one way or another, try to find the meanest of jobs available.

Mang Pering is doing just that. He finds his way to the river where he hopes to find some fish and shell for his family’s food. But even this simple means to survive is prohibited. “Noon pwede naman kaming mangisda sa ilog pero ngayon pinagbawal na nila. Hindi ko alam kung bakit” (Before we could fish in the river but this has been banned. I don’t known why), he said.

He is not about to give up, though. With his bayong and panti (nylon fishnet), Mang Pering does not mind being caught by the hacienda guards. He sneaks through the thick grassland on his way to the river. “Ito na lang ang magagawa ko para makakain kami ng aking pamilya. Bahala na kung mahuli ako” (This is the only way by which my family can eat. It’s all up to God if I get caught), he said. (Bulatlat.com)