You Are Here: Home → 2004 → December → 19 → For Land and Wages: Half a Century of Peasant Struggle in Hacienda Luisita

For Land and Wages: Half a Century of Peasant Struggle in Hacienda Luisita

The Versolas continue to support the strike, visiting the picket line to watch documentaries on the massacre, help in the kitchen chores or just exchange views with anyone. Mang Pering says that their forefathers’ struggle to finally own the land that is rightfully theirs rages on.

Stepping out of his home that could only fit a 2m x 3m flooring made of old tabla (wood) and a small antique closet, 68-year-old Perfecto – Mang Pering to relatives and neighbors – was on his way to a nearby river to catch some fish and shells.

The daily trek to the river is the only way by which his wife, Aling Maria, their polio-stricken daughter and a three-year grandchild survive since he retired as a casual sugar farm worker in the hacienda in 1998. But like planting vegetables on vacant lots, catching fish from the river is also prohibited. So Mang Pering had to be careful lest the hacienda guards caught him instead.

On Nov. 7, one day after about 2,000 sugar farm workers from the United Luisita Workers Union (ULWU) staged a plantation-wide strike, Mang Pering saw himself manning the picket line in front of Gate 1 of the Central Azucarrera de Tarlac (CAT) sugar mill compound. The compound is at the center of the 6,443-hectare hacienda. 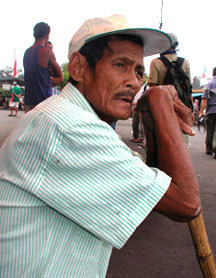 Union counsel Nenita Mahinay called the mass lay-off an unfair labor practice and a form of union busting. “Why retrench the permanent employees who are union leaders if the intention is not as malicious as busting the union?” she told Bulatlat.

In response, the ULWU sent its first notice of strike on Sept. 30 in protest against the retrenchment of its 326 members. It sent a second notice on Oct. 22, this time citing management’s refusal to bargain that resulted in a CBA deadlock.

After a series of union consultations, ULWU members decided to stage a strike on Nov. 6 to demand, in particular, the reinstatement of 73 sugar plantation workers who have not received their separation pay and the confirmation of their CBA demands that include wage increases and hospital benefits.

The sugar farm workers also demanded the revocation of the Stock Distribution Option (SDO), a scheme adopted in 1989 by the Hacienda Luisita owners Cojuangcos as a mode of agrarian reform. They want the hacienda subjected to land reform.

Striking workers (top photo) lock arms together as they brace of an attack by police and Swat teams. An IFI seminarian approaches the helmeted police to ease tension (lower photo). Photos by Budo de Guzman/Tudla

Eleven days into the strike and fighting off three dispersal attempts by the police, the striking workers whose number had by this time swelled to about 15,000 – including their families, neighbors and supporters – stood their ground at the picket line that fateful day of Nov. 16. For several minutes, they were pushed back, soaked and dazed by water cannons and tear gas.

Undaunted, the workers tried to regroup and maintain their picketline but a hail of bullets sent them scampering for safety. At about this time, the police – many of them coming all the way from other Central Luzon towns – were reinforced by hundreds of soldiers from the nearby Camp Aquino, headquarters of the Northern Luzon command. The shooting went silent after two minutes. Seven persons lay dead and at least 181 were wounded.

In an inquiry held by the House Committee on Human Rights on Dec. 14, Efren Reyes, a sugar farm worker, testified that he, together with 110 other hacienda workers, were arrested and detained at Camp Macabulos in Tarlac on the day of the massacre. Of those arrested, he said, only 20 were ULWU members. The rest were sacadas (seasonal cane cutters) from Negros in the Visayas and Central Luzon. The sacadas were apparently seized by soldiers at gunpoint from their temporary bunkhouses near the picket line.

The Department of Labor and Employment (DoLE) meanwhile has been dragged into the controversy. Labor Secretary Patricia Sto. Tomas came under fire from senators, labor leaders and human rights groups for asking the AFP to intervene in the labor dispute at the Hacienda Luisita. Denounced as unconstitutional, Sto. Tomas’ directive resulted in the hacienda massacre.