To acquire the hacienda, Don Pepe applied for loan from the Government Service Insurance System (GSIS). GSIS granted the loan with the same condition set by the CB: the land shall be distributed to the tenants at cost based on the government’s social justice program.

In short, as the court records show, Don Pepe was able to purchase the CAT sugar mill and the Luisita sugar plantation without shelling his own money but through government loans.

Basillio recalled that indeed when Don Pepe, under the Tarlac Development Corporation (Tadeco), acquired the CAT and the hacienda on May 11, 1958, the cane workers were told that the land would be sold at cost to them after 10 years – that is, in 1968.

Basillio and the thousands of sugar farm workers continued to work in the hacienda believing that 10 years later, they will finally own the land.

In March 1967, Land Authority Gov. Conrado Estrella inquired from Tadeco if it has complied with the CB and GSIS conditions. The company said that the conditions couldn’t be met because there were neither tenants nor tenancy unrest in the hacienda. What they employed, it said, were farm laborers.

It took another 10 years, in 1977, when the country was already under martial rule, for an inquiry to be done again on whether the conditions set by the CB and GSIS have been met. Demetria Cojuangco, Tadeco’s vice president, insisted that the conditions cannot be enforced.

On April 18, 1980, Marcos government lawyers led by Solicitor General Estelito Mendoza and Jose Santos of the ministry’s Bureau of Agrarian Legal Assistance filed a case (Civil Case No. 13164 before the Manila RTC Branch XLIII) against Tadeco. The complaint asked Tadeco to implement the conditions agreed upon in the acquisition of the hacienda.

On Dec. 5, 1985, two days after Corazon Aquino announced she was running against Marcos in the 1986 snap elections, Manila RTC Judge Bernardo Pardo handed down a decision ordering Tadeco to turn over the hacienda to the Ministry of Agrarian Reform (MAR). The ministry will, in turn, distribute the lands at cost to the farmer-beneficiaries.

Although the Marcos government’s land case against the Cojuangcos may be politically motivated, as Tadeco in its appeal of the RTC decision alleged, it cannot rule out the sugar farm workers’ legitimate claim to the land, Basillio argued.

Before the Court of Appeals (CA) could hear the appeal raised by Tadeco to contest Pardo’s decision, one of the Cojuangco heirs, Corazon Cojuangco-Aquino, assumed power through the 1986 popular uprising. In her early months as president, Mrs. Aquino made agrarian reform the centerpiece of her administration.

On June 7, 1988, she signed into law the Comprehensive Agrarian Reform Program (CARP or Republic Act 6657) covering sugar lands, among others. For the first time in agrarian history, land reform came in two options: land distribution and stock distribution.

While land distribution aimed to allocate parcels of land to the landless, poor peasants and tenants, stock distribution was an ambitious endeavor to allocate shares of stock to beneficiaries with the view of making them “co-owners” of the land.

Before the Stock Distribution Option (SDO) could become operational, Tadeco formed a spin-off corporation – the Hacienda Luisita, Inc. (HLI). Signed on May 11, 1989 and attested to by the Department of Agrarian Reform (DAR), a Memorandum of Agreement (MoA) to implement the SDO in the hacienda had the two corporations as first and second parties. The third party was the 6,296 “qualified” sugar farm workers.

The MoA provides that the sugar farm workers own only up to 33.3 percent of HLI while Tadeco and HLI, which are both owned and controlled by the Cojuangcos, own two-thirds of the corporation. This made the Cojuangcos still firmly in control of HLI under SDO.

The SDO helped the Cojuangcos evade not only the 1985 court ruling but more significantly CARP itself, critics said.

Meanwhile, from 6,443 has. the agricultural land of the hacienda shrank to only 4,915.75 ha. when HLI was incorporated. An article written by former Solicitor General Francisco Chavez and published in full by the Manila Bulletin Aug. 24, 1989, breaks down the total land area of the Tadeco: 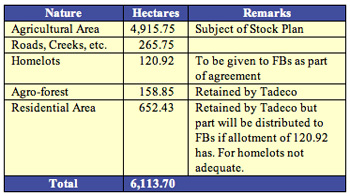 (Note: The 329.3 has. that is missing from the original land area of 6,443 has. acquired by Tadeco from Tabacalera is unaccounted for.)

HLI’s capital stock stood at P355.31 million. Based on this, the sugar farm beneficiaries supposedly own P118 million of the capital stock or 118 million shares that should be distributed for free to 6,296 farm workers within 30 years, the life span of the stock plan.