Abelardo Ladera: The Hero of Luisita

As a young lad, Ladera roamed the village streets and forayed into the thick sugar cane growth, creeks and by-ways with his friends to catch fish and frogs, gather wild vegetables and whatever they can bring home to eat.

His mother traces the late councilor’s deep concern for the workers to his religious upbringing. In his teens, Ladera, the eldest in a brood of four, was a leader of Catholic Youth Fellowship in their community. During Christmas and Lenten seasons, Ladera, along with his brother and sisters would lead and perform in plays during church activities.

“He usually plays the role of Christ. His pockets are often full of biscuits and food stuff to give to his friends,” Rosalina recalls. When rebuffed, Ladera would answer that he is only doing what he has been taught: give what he has to the less fortunate, his mother recounts.

His entry into politics was not by design. In, 1993, at the height of the implementation of SDO, the company announced that the entire village would be relocated to give way to a road project. Ladera, then a village council member, led in opposing the demolition of the homes in his barangay. He helped man the barricades for several months. 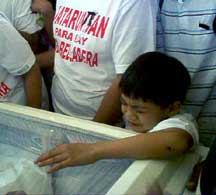 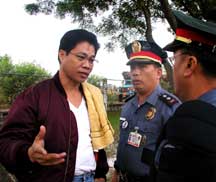 Ladera’s only son (top) could not believe his father was dead and would not allow the coffin to be closed. Ladera (above) negotiating with police officers during the Hacienda Luisita strike. (Photo by Pokus Gitnang Luson News Service)

At one point, he climbed the church roof and told the heavily-armed demolition crew that they would have to shoot him first and destroy the church before they can demolish their homes and the community.

The forcible demolition was prevented. An agreement with the Cojuangcos was reached wherein the people agreed to be relocated in a site only a few meters away and with sufficient financial and material support for rebuilding their homes and their community.

In 1994, Kagawad Abel handily won as a barangay chairman, not of his own choice but on the clamor of people.

In 2001, he ran and placed fourth as a city councilor, the only neophyte barangay chairman who won among scores of his peers who lost during that election. In the 2004 local elections, he was re-elected getting the second highest number of votes on an anti-Cojuangco campaign platform. By this time, even his political opponents acknowledged that he can easily be the next city mayor.

But electoral politics is not what led to his death.

In an interview held last February in his home in Barangay Balite, Ladera explained that the land use design of the Cojuangco family for the hacienda, and President Gloria Macapagal-Arroyo’s Subic-Clark-Tarlac Expressway (SCTE) run counter to the hacienda people’s claim on the land and desire for a better life.

“We cannot blame the people for asserting their rights. If the plans push through, there will be no more land for the people to claim and they will lose their homes and sole means of livelihood. As a resident of the hacienda and their councilor I have no choice but to support and fight for the people,” Ladera said.

As city councilor and chair of the committee on human rights, labor and employment, he filed and successfully passed several resolutions in support of the hacienda workers.

“He is one of the biggest reasons why the Cojuangco family is finding it difficult to terminate the hacienda workers en masse, dismantle our unions and eventually drive us from the land,” said Ricardo Ramos, president of the Central Azucarera de Tarlac Labor Union (CATLU) and a friend and kumpare of Ladera.

Ladera was at the picket line in Gates 1 and 2 of the sugar mill to render support to the striking workers, their families and friends during the tension-filled days and nights following the November 10 assumption of jurisdiction order issued by Labor Secretary Patricia Sto. Tomas, Ramos told Bulatlat.

The order paved the way for the tragic killing of at least seven protesters allegedly by military and police personnel who were ordered to clear the picket line.

Days before the Nov. 16 massacre, Ramos recounts, the councilor wrote and faxed letters to former congressman Jose Cojuangco Jr. and Rep. Benigno Aquino III offering himself as a mediator to avert another violent dispersal at the picket line.

A close ally of Tarlac Gov. Jose Yap, he was present in several meetings at the provincial capitol days before November 16, along with union officers, management representatives and PNP and NOLCOM officers where he lobbied strongly for a peaceful settlement of the strike.

“The Cojuangco family knows that as long as we remain in the picket lines, their plans cannot be implemented. They are causing the failure of the negotiations because of their refusal to allow us to go back to work and they continue to use violence against us.” Galang said.

But the people of Hacienda Luisita are determined to fight on.

In the evening of March 10, only a day after Ladera’s burial, about 100 soldiers aboard two army trucks entered the plantation and scoured the villages from barangay Sta. Catalina to Balite. They patrolled in the middle of the night till dawn, peeked through windows of the people’s homes and asked questions intended to create fear. The Northern Luzon Command has confirmed the soldiers’ presence to media.

Leonarda Halili, a farm worker from barangay Sta. Catalina, said she and other leaders from the barangay confronted the soldiers in the morning and told them they are not welcome and should leave the community.

Leaders at the picket line declared an alert and started to mobilize people from the barangays to reinforce the picket lines. Church leaders led by the Promotion for Church People’s Response (PCPR) arrived in Gate 1 on March 12 to render support and question the military intrusion.

Joey Romero, an ULWU director, said one of the best ways to give justice to the death of Ladera is for the hacienda people to carry on the struggle.

“While we are deeply saddened, we are also inspired by the example of Councilor Ladera. We know that the nine martyrs [of Hacienda Luisita] were killed because they supported and fought for our right to the land. Their sacrifice will not be in vain,” Romero said. (Bulatlat.com)