Cha Cha is about Political Survival

The political crisis now cannot be solved by the shift to a parliamentary system with Macapagal-Arroyo and her allies imposing themselves upon the Filipino people. The Filipino people need less of them, not more.

Against all odds, the Macapagal-Arroyo administration and its allies in the House of Representatives are ramming through their charter change initiative. After being stopped by the Supreme Court in its track of making a mockery of the people’s initiative provision in the 1987 Constitution, they are now using once again the tyranny of numbers in the House. Speaker Jose De Venecia’s boys have shown once again that they are bereft of logic and reason, bringing back memories of their handling of the two impeachment complaints.

But of course, there is a similarity and connection in their desperation then and now.

Not for economic progress 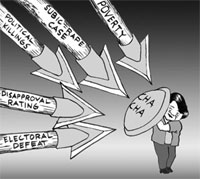 In spite of the bold pronouncements by President Arroyo that charter change will bring the nation at par with First World countries, there is nothing substantial in the proposed amendments in the economic provisions that have not been implemented yet through legal machinations. The Macapagal-Arroyo administration plans to further liberalize the economy by removing the restrictions on foreign investments especially in the ownership of land, exploitation of the country’s natural resources, and operation of basic utilities and other protected industries such as insurance and brokerage firms. It’s as if the economy has not been liberalized enough.

Through the Foreign Technical Assistance Agreement, foreign mining companies such as Lafayette, Western Mining Corporation, among others, have been extracting the country’s mineral resources and contaminating its rivers and irrigation systems with mine tailings. In terms of basic utilities, a closer look at the company profiles of Manila Water and Maynilad reveals that United Utilities of Britain, Mitsubishi of Japan, and Odeo of France, respectively, are major stockholders of these water companies.

There is still a limit on the number of branches offshore banks can establish and in the controlling shares foreign companies can hold in insurance, investment, and brokerage firms. But the major players in portfolio investments are foreign finance and investment firms anyway. And the International Monetary Fund-World Bank (IMF-WB) has been dictating how the country’s finances should be managed and how the economy should be run.

The globalization thrusts of liberalization, deregulation, and privatization are already in full swing; the government has been going around the restrictions on foreign investments provided by the Constitution; and is following the impositions of the IMF-WB to the letter. The removal of restrictions on foreign capital in the Constitution is mere icing on the cake of poverty that the Filipino people are being made to swallow.

But still the country is nowhere near the level of First World countries. In fact, the economy and the Filipino people are worse off with globalization.

The shift to a parliamentary system would not mend the political divisions, and put an end to “destabilization” efforts and coups d’etat as claimed by Malacanang and Speaker de Venecia. In the first place, political divisions and political instability happen even in parliamentary systems. Secondly and the more important point is that the cause of all these is the crisis of legitimacy of the Macapagal-Arroyo administration.

What President Arroyo and De Venecia’s ilk are trying to solve through charter change is the crisis of legitimacy of the Macapagal-Arroyo administration and their impending defeat in the May 2007 elections. Their impending defeat is confirmed by the continuing dissatisfaction rating of President Arroyo and the Pulse Asia survey showing the administration bets being wiped out in the senatorial race. The same results may be expected in elections for the House.

If they succeed in ramming through charter change, they hope to stave off the crisis and legitimize Gloria Macapagal-Arroyo’s continued stay in Malacanang; strengthen her power, by giving her the powers of both president and prime minister and make it easier for her to declare Martial Law, to crush opposition to her rule; prevent her impeachment especially because of the high probability that the opposition would win the majority in both Houses; extend the tenure of the administration-dominated Congress to buy time to prepare to cheat in the next elections; and remove limits to their terms so that they can continue perpetuating themselves in power..

The political crisis now cannot be solved by the shift to a parliamentary system with Macapagal-Arroyo and her allies imposing themselves upon the Filipino people. The Filipino people need less of them, not more.