Face to Face with Terror in the Philippines

Editors’ Note: For four days from Nov. 16-20 this year, Ted Alcuitas, a Filipino-Canadian journalist, traveled to the Central Luzon provinces of Nueva Ecija and Bulacan as part of a nine-member Canadian fact-finding mission to investigate the human rights situation in the Philippines. They sought out victims and families and documented their stories, often facing military harassment. After the mission, he stayed in the country to cover the mothballed ASEAN Summit in his Cebu home province and filed this report.

By Ted Alcuitas
Contributed to Bulatlat

CEBU CITY, Philippines – As the Philippines’ premier southern city prepared for last week’s Association of Southeast Asian Nations (Asean) Summit, Cebuanos seemed oblivious to the devastation of Typhoon Reming’s deadly toll just a week ago which claimed more than 500 lives in Albay. Organizers must have been relieved that the typhoon spared the city that almost did not have its P515-million convention center finished in time for the 12-nation summit. The summit should have been held December 11-14, but the Arroyo administration canceled it a few days ahead for still unclear reasons.

The feverish pace of sprucing up the city included bulldozing “squatters” to make room for the controversial Cebu International Convention Center (CICC). They were shoved to the side of the behemoth structure and conveniently hidden behind a wall of earth so they cannot be seen by the 17 heads of state including U.S. Secretary of State Condoleezza Rice. Each was given a can of paint for their shacks’ tin roofs in order to sanitize the area. Vagrant children and even stray dogs were rounded up to make sure no wayward animals or humans strayed unto the path of visiting dignitaries.

The city was teeming with soldiers in full battle gear supposedly to thwart any “terrorist” plan to disrupt the meeting. Yet, not one of them was redeployed to help in rescuing or evacuating the people in the mudslides of Daraga, Albay, where people were left on their own to escape the devastation. The eerie images of people running for their lives reminded one of the same images in the Katrina hurricane a year ago when U.S. soldiers were conspicuously absent as they were busy fighting a war in Iraq and elsewhere but left their own citizens to drown in the floodwaters of New Orleans.

Days before the scheduled summit, a war of words ensued between the government and militant groups converging on the city to hold their own parallel meetings. When Justice Secretary Raul Gonzalez vowed to throw militants to the sharks in the waters of Mactan Channel, fisherfolk who planned a “fluvial parade” promptly corrected him by saying there are no sharks in the water where they fish. The real sharks according, to the fisherfolk, were in Malacanang with the U.S. as the great white shark and the IMF-World Bank as the loan shark. 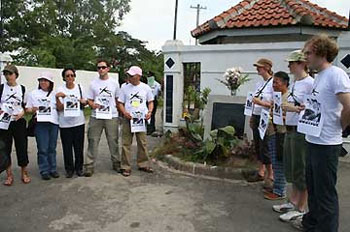 Some of the delegates to the Canadian Human Rights Fact-Finding Mission with Karapatan secretary-general Marie Hilao-Enriquez and other Filipino activists during the commemoration of the Hacienda Luisita massacre’s second anniversary (Photo by Dabet Castañeda / bulatlat.com)

In our brief incursions to the villages (barangays) where there were reported incidents of political killings, we encountered the face of terror among the people we met and talked to.

The terror of a father who survived a military attempt to kill him in front of his wife and a two-day old son and two-year old daughter, because he was suspected of being a communist sympathizer. He was shot in the neck with the bullet exiting to his side. After he fell, another shot was fired at his leg. Today, his traumatized daughter’s first words when asked about his father are: “Papa? Bing! Bing! Bing!”

The terror of a sister who can’t stop wailing as she narrated the bludgeoning of her brother by five soldiers as the wife and four children watched in horror.

The terror of a mother whose brother-in-law hanged himself after his best friend was killed by the military, repeatedly asking us why we are conducting an investigation and what would happen to her and her family when we leave. She pleaded not to take any pictures of her family.

The anguish of a father resting his head on his hands as he struggles to listen to his wife narrate the circumstances of the abduction, torture and disappearance of his young daughter by military elements.

The terror of a father who returns to his village to see for the first time the charred remains of his house after it was burned by the military because he was suspected of being a member of the New People’s Army (NPA), the armed component of the Communist Party of the Philippines which is waging a three-decades old war of national liberation against the government of the Philippines.

The terror of a young Catholic priest as he showed us the death threats on his life contained in a letter and a .38 caliber bullet thrown into the collection box of his parish church.

These are the collateral damage in the global war on terror as played in the Philippines – the “second front” in this deadly war. And President Gloria Macapagal-Arroyo is only too willing to oblige her U.S. master, closing her eyes to the searing images of terror and anguish as her military follows a deadly pattern of killings of the “enemies of the state,” never before seen in the Philippines – not even during the time of the infamous dictator Ferdinand Marcos.

Yet the country is not officially under martial law.