There are 34 OFWs on death row, including six women, largely in the Middle East.

Migrante said that their cases differ from one another but they are all Filipinos who are forced to work abroad to give a better life to their loved ones only to end up with shattered dreams. 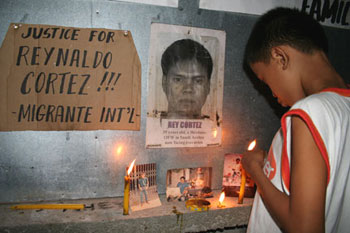 According to Migrante International, five OFWs have already been executed in Saudi Arabia since 2001. They are Antonio Alvesa, Sergio Aldana, Miguel Fernandez, Wilfredo Bautista and Reynaldo Cortez.

Had the migrants rights advocacy groups not intervened, Marilou Ranario from Kuwait could have been dead by now.

Moreover, the crackdown on OFWs continues.

Data from the Department of Social Welfare and Development revealed that from 2001, there were 10,000 Filipinos deported from Sabah, Malaysia. However, Migrante said that for this year alone, there were 450,000 deportees from Malaysia.

As new laws on migration are being implemented in many countries, especially the European Union, Migrante International fears that the human rights of migrants will be violated.

Connie Bragas-Regalado, chairperson of Migrante International, said that the Arroyo government has been a model for other countries when it comes to labor export management. She said though that for OFWs, this means a systematic exploitation and outright neglect. (Bulatlat.com)