Antonio Tinio, chairperson of the Alliance of Concerned Teachers (ACT) pointed out that Neri’s appointment is another brazen attempt of Malacañang “to take control of the multi-billion peso pension funds of private sector workers so they can be used to promote the interests of Mrs. Arroyo.” 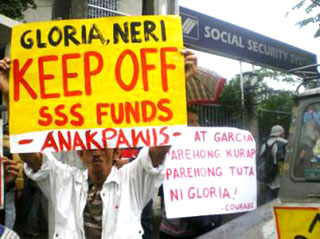 Ferdinand Gaite, national president of the Confederation for Unity, Recognition and Advancement of Government Employees (COURAGE) questioned Neri’s credibility. “It is not impossible for him to become silent again if the SSS’s money will be looted by Malacañang,” Gaite said, referring to Neri’s refusal to confess the truth behind the ZTE-NBN controversy.

Anakpawis secretary-general Cherry Clemente vowed that they will join other groups to form a watchdog against any form of corruption. (Bulatlat.com)