The Philippines’ indigenous peoples – who comprise some 15 percent of the population and who are among the country’s poorest – have become more marginalized and impoverished under this government.

When Mrs. Gloria Macapagal-Arroyo delivered her State of the Nation Address (SONA) last July 28, there was one man in the House of Representatives gallery who, upon being acknowledged, stood up. He was wearing a G-string, his tribe’s traditional male attire, and for a moment he threatened to upstage the Malacañang occupant.

That man is Rosario Camma, the overall chieftain of the Bugkalot tribe of Quirino, Nueva Vizcaya, and Aurora. He is also the mayor of Nagtipunan, Quirino.

Arroyo cited him as one of the country’s local heroes. She credited him for his supposed work at improving his tribe’s livelihood following the release of their Certificate of Ancestral Domain Title (CADT), which covers 100,000 hectares. 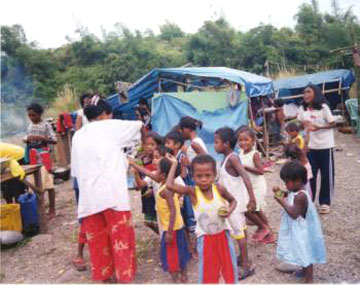 Himpad Mangumalas, a member of North-Central Mindanao’s Higaonon tribe and the spokesperson of the Kalipunan ng Katutubong Mamamayang Pilipino (KAMP or National Federation of Indigenous Peoples of the Philippines), said Camma was merely used by the Arroyo government for its propaganda purposes. “Mrs. Arroyo just used him so she could look good, so she could have something to show that would make her look like she is doing something to improve the lot of the indigenous peoples,” he said in an interview.

Mangumalas recounted his encounter with Camma in a recent congressional hearing. “He is one of the pro-mining mayors, one of those who really work hard so that prospective mining projects in his area could push through,” Mangumalas shared.

The KAMP spokesperson finds it regrettable that a pro-mining mayor could be declared as one of the country’s local heroes, because large-scale mining, he says, has been and continues to be the biggest problem facing indigenous peoples’ communities. He says mining – that is, the large-scale mining conducted by multinational corporations – has led to the destruction of resources in indigenous peoples’ ancestral lands – and, in the worst cases, has led to displacement.

Data gathered by KAMP show that of the 24 “priority mining areas” marked by the Arroyo administration, 18 are in indigenous peoples’ territories. Ten of these, Mangumalas said, are in Mindanao; the rest are in Palawan, the Mindoro provinces, the Cordillera region, and the provinces of Quezon and Rizal.

Aside from corporate mining, another major issue that directly affecting indigenous peoples is the construction of large dams and other energy projects, mostly funded by multilateral institutions like the World Bank (WB) and the Asian Development Bank (ADB). A document submitted by the Indigenous Peoples’ Rights Monitor (IPR-Monitor), the Tebtebba Foundation, and the Philippine Indigenous Peoples Link (PIPLinks) to the Universal Periodic Review (UPR)* earlier this year, “The Human Rights Situation of Indigenous Peoples in the Philippines,” states that “seven ‘priority’ large dams are to be built in locations that will directly affect indigenous communities.”

Mangumalas, meanwhile, cited the construction of the Sibulan Hydro-Electric Power Plant within the territory of Davao del Sur’s Bagobo tribe as one of the major energy projects adversely affecting indigenous communities.

“Development” aggression also takes the form of big agri-business projects, the creation of industrial zones, and so-called “eco-tourism,” among others. One major eco-tourism project cited by Mangumalas is the Subic-Clark-Tarlac Expressway Project (SCTEP), which he said “has seized some land from Aeta communities.”

The document submitted by IPR-Monitor, Tebtebba Foundation, and PIPLinks describes the effects of development aggression thus:

“The widespread implementation of extractive industries and other development projects in indigenous territories without their consent is violating their collective rights and is worsening their marginalized situation… Their adverse impact (includes) the destruction of livelihoods, the environment, land, resources and properties and has also caused conflicts, divisions and the erosion of indigenous socio-political systems.”