After a High Court justice branded as “patently illegal” the Memorandum of Agreement on Ancestral Domain, the U.S. Ambassador was quick to deny any involvement in the aborted signing of the pact.

But critics have pointed to the prominent role that the U.S. had played in the GRP-MILF peace negotiations. 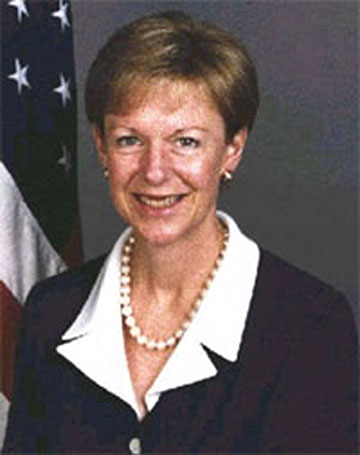 After a Supreme Court (SC) justice declared as “patently illegal” the Memorandum of Agreement on Ancestral Domain (MOA-AD), United States Ambassador to the Philippines Kristie Kenney was quick to deny any involvement in the aborted signing of the agreement.

In a statement sent through email, Prof. Jose Maria Sison, chief political consultant of the National Democratic Front of the Philippines (NDFP), said that Kenney was “blatantly lying” when she said that the U.S. government had nothing to do with the GRP-MILF peace negotiations nor with the controversial MOA-AD.

Sison said that Kenney has worked closely with the Philippine Facilitation Project (PFP) of the United States Institute of Peace (USIP) in “steering the course of GRP-MILF peace negotiations for the sake of US interests.”

The USIP is a quasi-government institution funded by the U.S. House of Representatives. The chairman of the board is J. Robinson West who is chairman of PFC Energy, Washington. Members ex-officio are Secretary of State Condoleezza Rice and Secretary of Defense Robert Gates. The executive director of the Philippine Facilitation Project is G. Eugene Martin, a retired diplomat who once served as the deputy chief of mission at the U.S. embassy in Manila.

In a separate statement, Renato Reyes Jr., secretary general of the Bagong Alyansang Makabayan (Bayan or New Patriotic Alliance) said the USIP used examples of ancestral domain conflict resolutions of the Native American Indians, the Inuit tribes in Canada, the Maori in New Zealand and other experiences that did not require secession from an oppressive regime. He said, “The USIP advocated an ancestral domain arrangement that would remain friendly with U.S. interests.”

Sison slammed the U.S., saying it is not interested in a just and lasting peace in either the Bangsamoro land or the entire Philippines. “It is interested solely or mainly in advancing U.S. interests amidst conditions of armed conflict. It merely pretends to facilitate the GRP-MILF peace negotiations when its sees big advantages in doing so.”

Sison noted that the USIP report is quite frank in admitting the selfish interests of the U.S. The report states, “Today’s complex diplomatic landscape increasingly requires new tools and techniques of conflict management, including quasi- and nongovernmental actors, to accomplish U.S. foreign policy goals. Because of its ability to deal with non-state actors and sensitive issues underlying civil conflict, USIP can be a useful instrument for advancing U.S. interests.”

Sison said that Kenney frequently travels to Mindanao and oversees U.S. interests there, including U.S. direct investments, military forces and pseudo-development projects. “The Filipino people know that the U.S. covets the oil and other natural resources of Mindanao and wants to establish U.S. military bases there to protect U.S. imperial interests,” he said.

Bayan’s Reyes cited the $100-million off-shore oil exploration in Sulu by American oil giant Exxon Mobil as an example of the interests being protected by the U.S.

Reyes also noted that the USIP report also states that the U.S. embassy coordinated with the U.S. Pacific Command in counter-terror training and in ensuring high visibility of US troops in Mindanao.

The report, Reyes said, describes U.S. policy instruments in Mindanao to include ‘diplomacy, conditionality of U.S. economic and military assistance programs, and more punitive measures on the counterterrorism front.’

The Bayan leader said that this could mean that the U.S. government is also open to direct military intervention.

Reyes said, “Arroyo and her subalterns must be investigated and held accountable for their actions.”

Based on the report, a PFP delegation met with Arroyo in August 2003. It also states that when Arroyo visited the United Nations in September 2003, several senior advisers and USIP staff members met with her and her delegation to review the status of the peace process and the role of the Institute.

The report also cites that Ambassador Frank Wisner and USIP representatives also met with Arroyo in California after her 2004 election “to encourage a renewed GRP-wide effort to conclude an equitable settlement with the Moros.”

”The Arroyo government is guilty of allowing such brazen intervention,” said Reyes.

He deemed, “Arroyo and U.S. interests likely intersected on the issue of charter change and the prospect of U.S. investments in Mindanao.”

Reyes said the USIP report already anticipated the issue of charter change. The report states that some provisions in the MOA-AD might be declared as unconstitutional by the Supreme Court.

Reyes said, “The Arroyo government pounced on the opening for cha-cha as an opportunity to advance its own self-serving agenda of term extension.” (Bulatlat.com)